Things to do in Philly this weekend, Oct. 4-6

Philly is already in the Halloween spirit 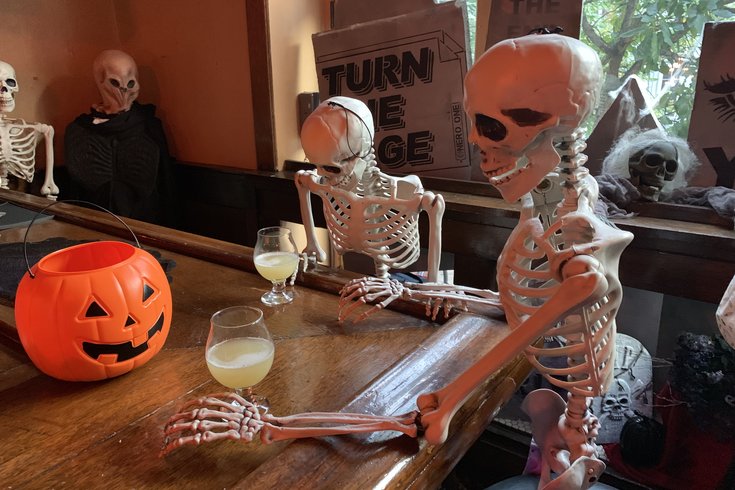 Inside Haunt, a Halloween bar in Center City.

We've reached the first week of October and Philly is already in the Halloween spirit. This weekend, you can visit two Halloween-themed bars in Center City and check out an eerie public art installation at the Delaware River waterfront.

There's also a 5K through Laurel Hill Cemetery and the annual Philadelphia International Dragon Boat Festival. Find more details on what's happening in our roundup below.

A 90-foot light and water installation is set to make its North American debut at Philadelphia's Race Street Pier on Friday, Oct. 4.

"Ghost Ship," a 3D hologram of an 18th-century ship, will appear under the Benjamin Franklin Bridge through the first weekend of November.

FCM Hospitality, the creators of Philadelphia's Parks on Tap series, is partnering with Delaware River Waterfront Corporation and Mainstay Independent Brewing Co. to bring a beer garden to Race Street Pier for the next four weeks. Both food and drink will be available.

The Rest in Peace 5K through Laurel Hill Cemetery, a National Historic Landmark in Philadelphia, is back on Saturday. Online registration guarantees you a T-shirt and gift bag, but there will be day-of registration as well.

And remember to wear a costume! During the post-race party in the cemetery – complete with Halloween treats, beer and music – winners of the costume contest will be chosen.

Dragon Boat Festival on the Schuylkill River returns this Saturday

On Saturday, racers of all levels will compete in the annual Philadelphia International Dragon Boat Festival on the Schuylkill River. The action will start around 8 a.m. and end around 5:30 p.m.

Spectators are invited to watch from the Schuylkill banks for free, and can bring blankets, chairs and picnics. There will be a concession area with food and drink, too.

Haunt is another pop-up Halloween-themed bar in Center City

There are actually two Halloween-themed bars in Philly! Head to the second floor of The Pearl Tavern, soon to open at 1123 Walnut St. in Midtown Village in the space that was formerly Irish Pub, for creative cocktails and creepy decor starting Thursday night.

The family-friendly attraction, back for a third year, includes pumpkins depicting movie stars, musicians, Disney characters and other recognizable figures, while other pumpkins will be stacked together to create huge sculptures.