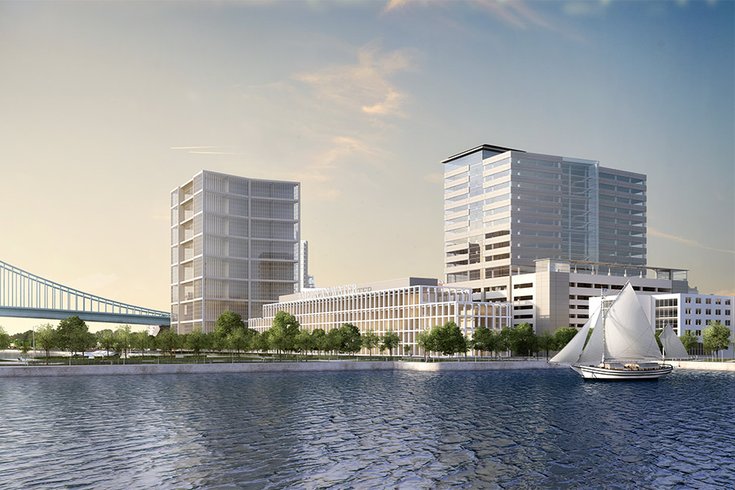 This rendering provided by Conner Strong & Buckelew, NFI and The Michaels Organization shows the office project proposed for the Camden Waterfront.

The three firms – Conner Strong & Buckelew of Marlton, NFI of Cherry Hill and The Michaels Organization of Marlton – will move hundreds of jobs to the city if their applications to the Grow NJ Program are approved.

They seek to build a $245 million, 18-story building with separate office space for each of the three business entities, as well as shared space for amenities, according to a news release issued jointly by the companies. It would also feature a huge outdoor piazza overlooking the Delaware River and the Philadelphia skyline.

Company officials said they expect the state Economic Development Authority to consider their applications at its Tuesday meeting and hope Camden Tower will be ready for occupancy in August 2019.

“When The Camden Waterfront was announced almost a year-and-a-half ago, we lauded the vision and commitment to Camden,” said George E. Norcross III, executive chairman of Conner Strong & Buckelew and chairman of the Board of Trustees of Cooper University Health Care. “If our applications are approved by the EDA, we will each be investing tens of millions of dollars and aligning the futures of our companies with the future of Camden.” 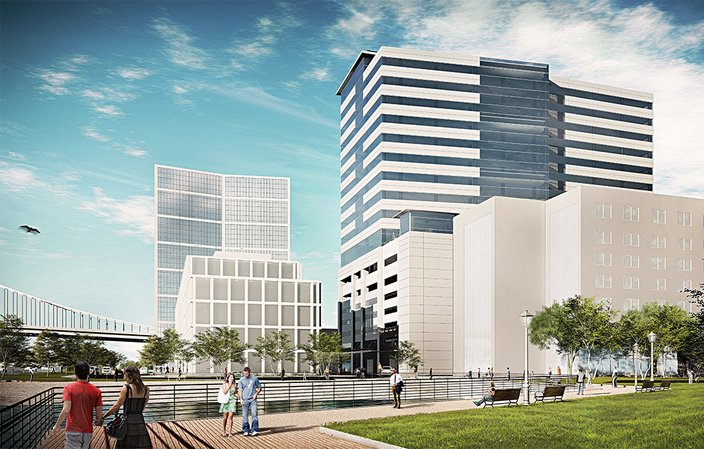 This rendering provided by Conner Strong & Buckelew, NFI Industries and The Michaels Organization shows the office project proposed for the Camden Waterfront.

The companies' leaders – NFI CEO Sid Brown, TMO President John J. O’Donnell and Norcross – had announced in the fall their purchase of the Ferry Terminal Building. Built 10 years ago, it was the first new office building in Camden in nearly a half century. The investment by the companies, their executives and their families in the waterfront project could grow by as much as an additional $100 million with the development of new apartments and a hotel, they said.

“I hope that our applications are approved, and I look forward to not just being a cheerleader for Camden, but being a corporate resident." – George E. Norcross III, executive chairman of Conner Strong & Buckelew

Neither U.S. Rep. Donald W. Norcross, the brother of George Norcross, nor his immediate family are involved in the project and do not stand to benefit from any of the three projects – the Ferry Terminal Building, the Camden Tower, or the potential apartments and hotel, the news release said.

"If approved we will be able to maintain NFI's headquarters in Camden County and grow our employee base there, reinforcing our continued commitment to South Jersey and the communities NFI has been a part of since its founding in 1932,” said Brown, who owns the company with his brothers, in the statement. “The focus of our new building's design will be on the employee experience. The building and surroundings will offer our employees the first-class office space and amenities they deserve, making NFI an even more appealing and exciting place to work.”

In recent years, more than 20 companies – including Subaru, the Philadelphia 76ers, Holtec International and ResinTech Inc. – have announced plans to move to Camden.

The American Water Works Co. last week broke ground on a 220,000-square-foot headquarters expected to open late next year. The company would bring more than 700 jobs to the city.

Since 2012, more than $2.5 billion of new development in Camden has either been completed, is in construction or has committed funding.

If the tax credit applications are approved, the 375,000-square-foot Camden Tower project would bring a minimum of 869 jobs to the city, company leaders said.

“I hope that our applications are approved, and I look forward to not just being a cheerleader for Camden, but being a corporate resident,” Norcross said.

Disclosure: George E. Norcross III, executive chairman of Conner Strong & Buckelew and chairman of the Board of Trustees of Cooper University Health Care, is the father of PhillyVoice Founder and CEO Lexie Norcross.