Joe Beddia's second restaurant opened earlier this year, and his pizza has proven popular even after the novelty wore off 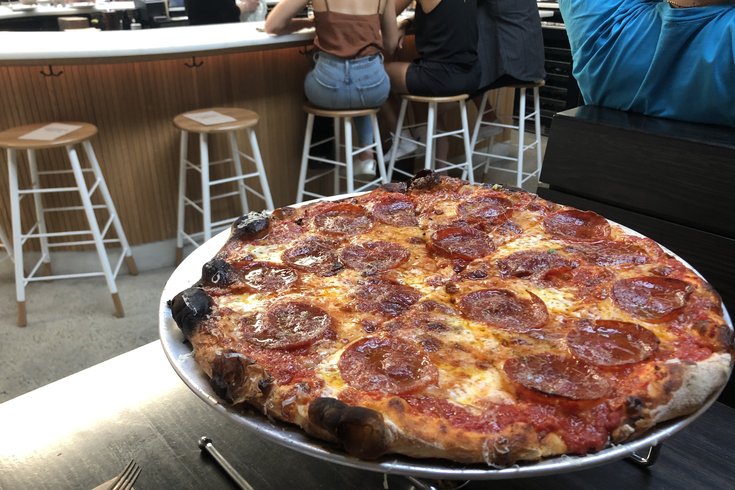 Pizzeria Beddia, the second Fishtown offering from pizza virtuoso Joe Beddia, opened earlier this year to widespread critical acclaim. Beddia's ascension into the important food world has been swift, beginning when Bon Appetit named his pies the best in the country back in 2015.

Time began putting together its 100 Greatest Places list last year, featuring places to visit, to stay, and to eat and drink from across the globe. This year, Beddia is one of seven restaurants in the United States to earn a spot in the section for places to eat and drink.

The magazine's capsule about Beddia recaps his success story, going from making 40 pies per day at the corner of Girard Avenue and Shackamaxon Street, to his current national – and, apparently, global – acclaim.

"Beddia is back with a full-service joint just a few blocks down the road from the original," the blurb reads. "It’s stocked with 120 seats, dozens more employees and a cloud-shaped light installation that encourages you to linger."

I could think of 100 better places in Philadelphia alone. I will however take the compliment because we have an amazing team that performs and enjoys on the highest level. Bababooey to youey

It's a fair take: Philly is replete with incredible places to eat that national magazines would never feature in a splashy spread. But, for this writer's take, the acclaim is warranted: Beddia makes the best pizza in the city, and the best pizza I've ever eaten anywhere.

Philadelphia's food scene has had a good 2019: Earlier this year, Michael Solomonov's Zahav was named the best restaurant in the country at the James Beard Foundation awards.

Interestingly, Beddia isn't the only Philadelphia spot getting a shoutout from Time Magazine this week, though his is decidedly more upbeat than the other.

The Broad Street Diner, the South Philly diner located at the Broad Street Line's Ellsworth-Federal stop, is the centerpiece of a new Time Magazine cover story on America's service industry and what the magazine calls "the left behind economy." The story centers on workers who earn low base pay and rely on tips to flesh out their income.

The story's subtitle clearly conveys its slant: "For millions of American workers, living on tips has become unlivable."

Earlier this month, Time released a special cover design to raise awareness about mass shootings across the country. Pennsylvania and New Jersey were both featured prominently on the cover, including six mentions of Philadelphia, and one mention each of Allentown, Lebanon, and Camden.