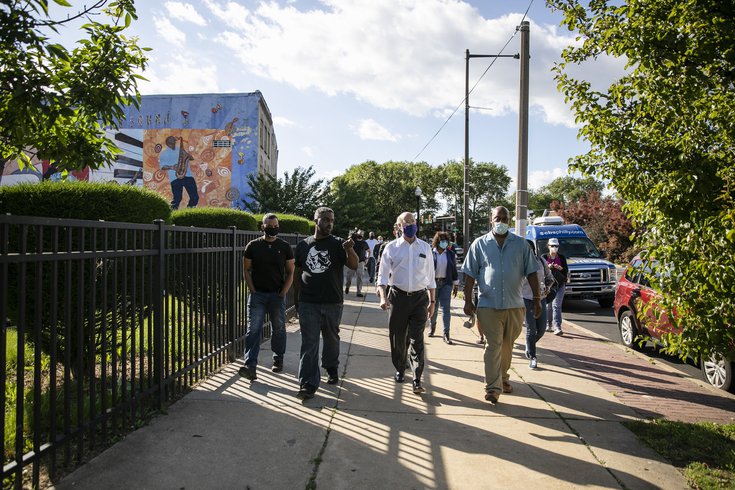 Gov. Tom Wolf joined a peaceful protest in Harrisburg on Wednesday, demanding justice for George Floyd. Above, Wolf tours Philadelphia on Monday in the aftermath of looting and property destruction.

Wolf marched at the front lines of the demonstration, which began Wednesday afternoon at the steps of the Capitol building and continued along a mile-long path to the Neighborhood Center of the United Methodist Church. There, a number of speakers addressed the crowd.

"George Floyd could not breathe," Wolf said, according to ABC 27. "When that happened, it meant that none of us could breathe. We have got to stop the divide in this country that separated white and black."

Floyd's death has sparked a wave of demonstrations decrying systemic racism and police brutality. Many of the peaceful protests have been overshadowed by the looting and destruction occurring in many American cities, including Philadelphia.

Minnesota prosecutors have elevated the murder charge against Derek Chauvin, the police officer who kneeled on Floyd's neck for nearly nine minutes, despite his pleas for air. They also charged three other officers with aiding and abetting murder.

I’m at today’s March Against Injustice and Gun Violence 2020 in Harrisburg in solidarity with our community.

Black lives matter. Racism must end. I am here to listen. pic.twitter.com/MoTYi7AtuW

The March against Injustice and Gun Violence 2020, organized by the nonprofits Be A Man and All You Can, prohibited weapons and required participants to wear face coverings to prevent the spread of COVID-19.

Before marching, Wolf prayed with the protesters who had assembled for the rally.

Gov. Wolf is here, and prayed with the group. #Harrisburg #protest pic.twitter.com/c1wClHpPx8

On Monday, Wolf traveled to Philadelphia to meet with Mayor Jim Kenney and Police Commissioner Danielle Outlaw. He took in the damage caused by looters and vandals, and met with black clergy and local business owners.

As peaceful demonstrations yielded to violence Saturday, Wolf signed a disaster declaration to provide assistance to municipalities in Pennsylvania.