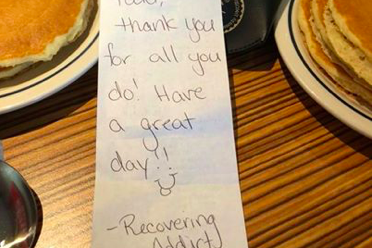 As New Jersey continues to battle an unprecedented surge in fatal drug overdose, one woman recovering from addiction took a moment to thank those who work to rescue others from the brink of death.

The Toms River First Aid Squad took to Facebook late last week to share a signed receipt from a woman who picked up the tab for a crew at a local IHOP.

Squad captain Alyssa Golembeski was joined at breakfast by five volunteers who were able to enjoy a $77 feast courtesy of the thankful woman, who remained anonymous in covering the bill, according to the Toms River Patch.

New Jersey is on a record-breaking pace for drug overdose deaths in 2018, a trend fueled by the opioid epidemic and the rising prevalence of fentanyl.

The Toms River First Aid Squad, which has been around since 1931, is one of the many local volunteer groups responding to medical emergencies in their community.

The NJCares website, a real-time dashboard of opioid-related statistics and information, reports that there were 6,335 naloxone administrations from Jan. 31 through May 31 of this year — meaning many more deaths were likely prevented by those who provide first-aid service.

"This gift was amazingly thoughtful, and brought our table of tired EMTs to tears," Golembeski wrote to the woman who paid her team's bill.

"We are so blessed to be able to serve you and everyone else who lives and works in the greater Toms River area. Good luck on your journey of recovery!"