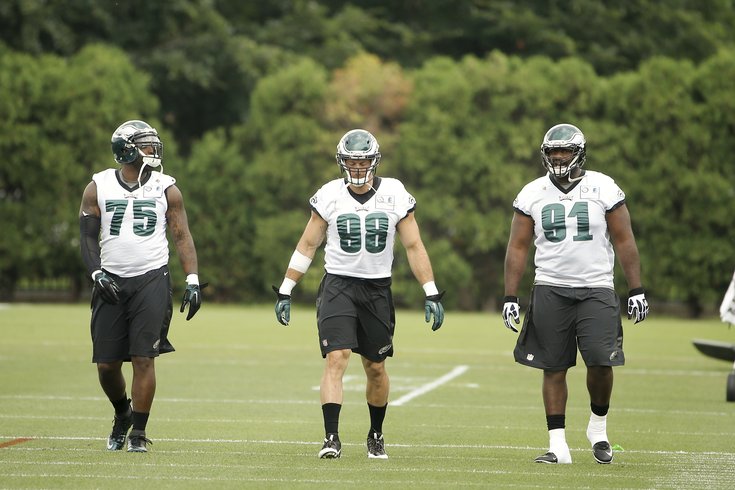 Late last week, PhillyVoice's own Matt Mullin and Rich Hofmann put together a list of Philadelphia's current top 25 athletes, which you may have heard being debated on 94.1 WIP or 97.5 the Fanatic this week. They called it #PhillyRank.

Here's how Matt and Rich explained the idea:

#PhillyRank (which, if we’re being honest, is an idea ripped off from ESPN’s NBARank) is a highly subjective ranking of the best professional athletes (Eagles, Union, Flyers, Sixers, Phillies) in Philadelphia at the moment.

For a more detailed description of the rules, again, just go check it out.

97.5 the Fanatic's midday show with Rob Ellis and Harry Mayes got wind that I had Sam Bradford ranked as the 18th best Eagle, so they had me on to debate that. You can listen to that here.

Anyway, as long as I made a list of the top 20 Eagles, I may as well publish it. To note, this list is (A) based on what the players have done lately and (B) a projection of how I think the players will perform in 2016.

3) Lane Johnson, OT: Personally, I think Lane Johnson is already a very good player, and is only going to get better. I liked the way Matt and Rich phrased it, saying that Johnson and Jason Peters are like "two ships passing in the night."

"Was Jason Peters a better offensive tackle than Johnson last season? Yes, when he was healthy. But we think these two are like ships passing in the night, and by the time the season rolls around, Johnson will be the best tackle on the team."

4) Jason Peters, OT: Peters is a borderline Hall of Famer, but his career is clearly in decline.

5) Zach Ertz, TE: We wrote at length about Ertz in our tight end training camp preview, noting that he is one of only 17 tight ends in NFL history to amass over 2000 yards in his first three seasons as a pro. (To note, I originally had Jordan Matthews ahead of Ertz, but in hindsight, Ertz is probably better, considering the position he plays). So I'm changing it. Sue me.

6) Jordan Matthews, WR: He may never be a guy who plays much on the outside, but he has a chance to have a long career, racking up a boatload of catches and yards playing from the slot. And that's perfectly fine.

7) Jordan Hicks, LB: He was a beast as a rookie, albeit in only half a season. But in the eight games he played, he had 50 tackles, three fumble recoveries, a forced fumble, a sack, two interceptions (including a pick-six), and he knocked out Tony Romo for half the season. Stud. Just stay healthy, Jordan.

8) Rodney McLeod, S: Under Matt's and Rich's rules, McLeod wouldn't count as he has not yet played a snap for the Eagles, but I'm including him here. McLeod is undersized, but he has quicks and packs a wallop when he hits. In a league where bad safety play is an epidemic, the Eagles have two very good ones.

9-11) Vinny Curry, Connor Barwin, and Brandon Graham, DE: Put them in whatever order you'd like. (This would be my order). Yes, Curry doesn't have much of a body of work to draw from, seeing as he's only been a sub-package player his entire career. Not anymore. In Jim Schwartz's scheme, Vinny will be able to put his head down and attack the quarterback. Whenever he has gotten the chance to do so in the past, he has produced.

Barwin, meanwhile, was a great fit as a do-everything outside linebacker in a 3-4, so his skill set will be wasted to some degree, but the transition to 4-3 DE won't be difficult.

As for Graham, he made the difficult transition from 4-3 DE to 3-4 OLB, and actually played a lot better than many thought he would. He'll be moving back to his more natural fit as a 4-3 DE under Schwartz.

12) Darren Sproles, RB/PR: Sproles struggled at times on offense, often dropping passes and being less effective as a runner than he was in 2014. Still, Sproles is very much still an elite punt returner who changes the outcomes of games with huge plays.

The guy has talent, but has been wildly inconsistent. Put it all together already, Mychal.

14) Bennie Logan, DT: Logan is a very unheralded player, but played very well early last season before some injuries derailed him a bit. Logan is on the final year of his deal, and should be a man possessed this season. (Not that he doesn't work his ass off as is).

15) Jason Kelce, C: Kelce will be the first to tell you he had a bad year in 2015. And he'd be right. That said, he's been a good player in the past, and he's still only 28 years old, so there's reason to believe he can bounce back.

16) Brandon Brooks, OG: Again, like McLeod above, Brooks hasn't played a snap with the Eagles yet, so he wouldn't count under Matt's and Rich's rules, but I'm including him. Brooks is an above average starter in the NFL, and will be an immediate and significant upgrade over what the Eagles had at RG a year ago.

17) Ryan Mathews, RB: When healthy, Mathews is a really good runner, although not the best fit in the Eagles' offense, as he does not fit the profile a back you can move around to create mismatches in the passing game. Also, we should stress "when healthy" twice, because he rarely is.

18) Sam Bradford, QB: Sam Bradford is entering his seventh year in the NFL and he has 25 career wins. He has also never won more than seven games in any one season. Last year, he was 26th in QB rating, 25th in yards per pass attempt, 22nd in TD passes, and 11th in completion percentage. (He only had a good completion percentage because he was Checkdown Charlie). In the positive column, his #LastSevenGames a season ago were the best seven consecutive games by any human in the history of sports.

19) Brent Celek, TE: He's not the receiving threat he once was, but he's easily the best blocking tight end on the roster, and still a useful player on offense.