Crews work to clear damage after storm sweeps through region 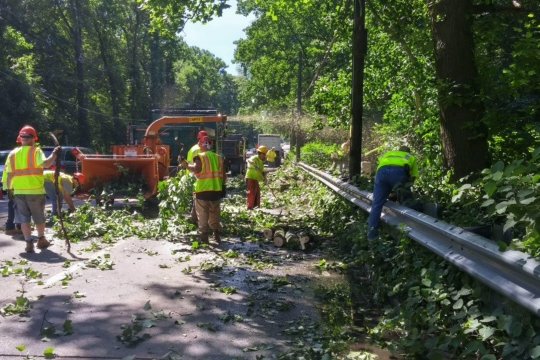 Crews in Camden County work to clear roadways after the storm.

Crews worked Wednesday to clear downed trees and wires that resulted from strong winds and rain Tuesday night. Officials in Delaware County declared a disaster emergency on Wednesday after the storm resulted in the loss of electricity for more than 100,000 customers. Highways and streets were littered with trees and debris as drivers ran up against inoperable traffic lights.

“Delaware County government stands ready to assist our municipalities, our emergency responders and our residents in the aftermath of this dangerous storm,” Chairman Civera said. “We don’t typically have a storm of this magnitude in June. Emergency officials compared it to a severe ice storm and we were told that the winds clocked at the airport topped 70 miles per hour, which is the fifth most powerful winds recorded in the region.

By Friday, PECO officials said they hoped to have power restored to 90 percent of their customers in Delaware  County. In the meantime, the county has advised residents to stay away from downed trees and power lines.

The Camden County Department of Public Works (DPW), Public Safety and Parks continued to work on clearing out and assessing storm damage. The Camden County Communications Center received a 900 percent increase in fire calls and 2,432 total calls over a six-hour period Tuesday.

“Our crews are working on several roadways right now to ensure the health and welfare of drivers and residents throughout our highway system,” Freeholder Ian Leonard, liaison to the Camden County DPW, said in a release.  “The scope and severity of this storm in the short period of time it struck the county was extreme and destructive. Personnel have been working since the weather conditions cleared yesterday and will continue to clear debris over the next 48 hours.”

Some of SEPTA's Regional Rail service is still suspended or delayed.

The Media-Elwyn is suspended until further notice, SEPTA said. The Paoli/Thorndale and Fox Chase lines have resumed operations. The Norristown High Speed line is operating only between 69th Street and Radnor with trains departing every 15 minutes. Alternate service suggestions are available online.

Storm damage took out service to the Atlantic City rail line to Philadelphia Wednesday. NJ Transit said it is working to restore service. PATCO service was also suspended for the morning rush hour Wednesday, but limited service was expected to resume in the afternoon.

NJ Transit will continue to cross honor PATCO tickets/FREEDOM Cards until 8p today. We thank them for working with us. #togethertransit

In a statement, Verizon said the issue impacted both voice and data for customers in Atlantic, Burlington, Camden, Cape May, Cumberland, Gloucester and Salem counties in New Jersey; New Castle, Kent and Sussex counties in Delaware and in Chester County. The service provider said service has been restored for Chester County and Delaware.

PECO also reported thousands of power outages throughout the region following the storm, including more than 80,000 in Delaware County and more than 70,000 in Chester County, according to an outage map from the electricity provider.

In Philadelphia County, almost 5,000 were reportedly still without power Wednesday afternoon, while more than 5,000 in Montgomery County remained without electricity. There were 46,379 customers without power in PSE&G's coverage area in New Jersey as of 12:20 p.m. PECO spokesperson Liz Williamson told 6abc that customers in the hardest-hit areas may not see their service restored until this weekend.

Those without power can visit several locations in the region to "Plug In, and Power Up!"

Tornado watches were issued for Chester County and Southern New Jersey earlier Tuesday evening, but were later canceled. Photos and video footage of possible tornadoes in South Jersey were circulating on social media. The National Weather Service has confirmed that it will send team members to Gloucester County to determine if a tornado touched down during Tuesday night’s storms.

Solar panels and roofs on the Deptford Mall in South Jersey were ripped off, and cars in the parking lot were flipped over after the storm rolled through, according to NBC10.

Amtrak suspended rail service between Washington and Philadelphia due to the weather, and trains between Harrisburg and Philly were delayed. 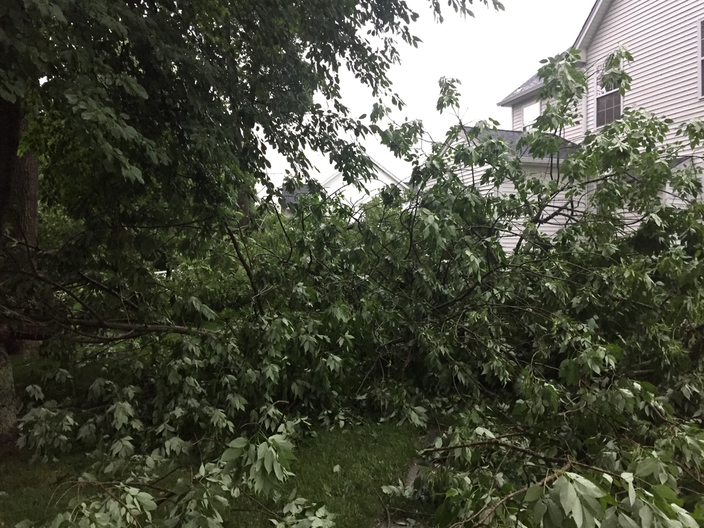 A fallen tree in Delaware County that collapsed after severe weather swept through the region. (Contributed Art/PhillyVoice)

Heavy rains started pounding Philadelphia around 6 p.m. Tuesday and were accompanied by lightning and strong winds, with some gusts up to 70 miles per hour. The National Weather Service issued an urban and small stream flood advisory due to the heavy rains for northern Delaware, South Jersey and Philadelphia. 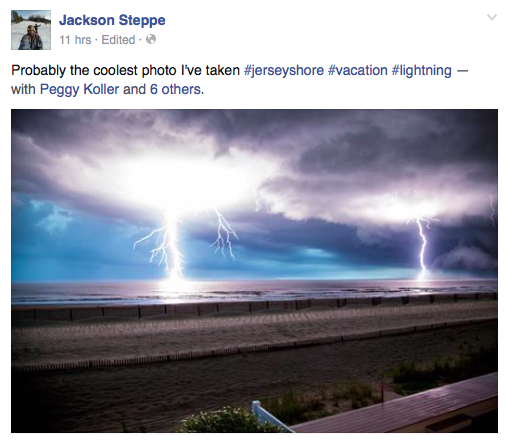 One Instagram user took a video as lightning struck the Billy Penn statue.

A fast-moving band of storms stretching from Virginia to southern New Jersey dumped up to an inch of rain in less than an hour in some places, said Jim Hayes, an NWS meteorologist in College Park, Maryland.

"The storms were intense, but they were moving pretty quickly," he said.

Private forecaster AccuWeather said the storms would reach into northern New England through Tuesday evening as a cold front intersected with hot and humid air.

Winds of up to 70 miles per hour were recorded in southern New Jersey, and the line of storms stretched westward into West Virginia, Kentucky and Tennessee.

About 74,000 homes and businesses were without power in northern Virginia and in the Washington and Baltimore areas, power companies reported.

PhillyVoice writer Daniel Craig and Reuters contributed to this report.