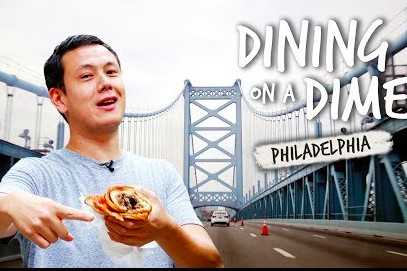 There can never be too many food series specials on Philadelphia.

When "All Nighter" came through to film last summer, Elie Ayrouth gave us what'll become a keepsake of a scrapple sandwich at the recently closed Little Pete's in Center City.

Every host understands by now that you have to do more than order a cheesesteak and smile for the camera, so these visits usually end up shining a light on some of the city's more underplayed hits.

In the near future, Eater will release a Philadelphia episode of Lucas Peterson's YouTube series "Dining on a Dime," which has sent him all around the world to sample popular cuisines and locally celebrated dishes.

A trailer for the upcoming episode shows Peterson visiting Philly in a goofy mood. There aren't too many hints about where he chose to make stops, but one meal he did give a try was the notorious Philly taco — a Jim's Steak wrapped in Lorenzo's pizza.

At the Magic Gardens, Peterson horribly raps "Parents Just Don't Understand" (although he may be better than present-day Will Smith) and tries a Philly taco for the first time. His verdict: "gross."

That can only mean he has better things to say about everything else. We've reached out to Eater for more information about when the Philly episode airs. We'll update the story when we hear back.