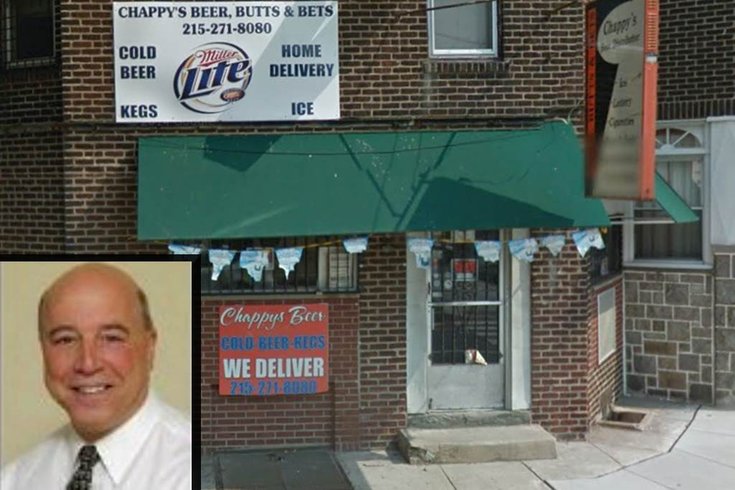 A federal indictment alleges that Dominic Verdi, a former deputy at L&I, offered bar and nightclub owners favorable treatment from the agency, as well as tips in advance of raids, if they bought their beer from Chappy’s, a South Philadelphia distributor prosecutors contend he part-owned.

As the head of the city’s Nuisance Task Force, Dominic Verdi wore a bulletproof vest. Whenever he was leading an after-hours raid on a crack house, nuisance bar, or an unlicensed massage parlor, Verdi was always the first guy through the door.

In thousands of raids over the years, Verdi, the former deputy commissioner of the city’s Department of Licenses and Inspections, gained a reputation around town as the go-to guy for law enforcement – local, state or federal – whenever it came to shutting down illegal operations around the city.

“He puts himself in harm’s way,” then-City Councilman James Kenney said admiringly about Verdi in 2000.

But Monday, on the 13th floor of the federal courthouse, it was Verdi who was being accused of breaking the law.

Federal prosecutors charged that while Verdi was those leading late-night raids all over town, he was hiding a conflict of interest – a part ownership he had purchased in Chappy’s Beer, Butts and Bets, a beer distributorship formerly located at 2825 S. 17th St. in South Philadelphia.

The prosecutors allege that Verdi was offering bar and nightclub owners favorable treatment from L&I, as well as tips in advance of task force raids – if they bought their beer from Chappy’s.

In a seven-count federal indictment alleging conspiracy, extortion and honest services fraud, the feds charge that Verdi induced bar and nightclub owners to buy more than $1 million worth of suds from Chappy’s.

And in 2007, the indictment charged, when Verdi was confronted by employees from the Office of the Philadelphia Inspector General, “Verdi denied having any ownership in Chappy’s.”

In a brief opening statement on Monday, Susan Lin, Verdi’s defense lawyer, told the jury to remember that the accusations of the prosecutor were not evidence in the case, and that Verdi, who has pleaded not guilty, is presumed innocent on all the charges.

“He did not extort anybody, he did not accept any bribes,” Lin said about her client.

If Verdi was so good at extortion, Lin asked the jury, why did he “allow Chappy’s to go under?” And how come his bank accounts weren’t “swimming” in cash?

In court, Verdi has said he is broke, and has asked a judge to appoint a lawyer to defend him.

Friends say the 61-year-old Verdi has fallen on hard times. His 88-year-old father, a retired postman, is in hospice. Verdi’s daughter has struggled with drug addiction. Since May, Verdi and his wife have custody of his now 11-month-old granddaughter.

Verdi isn’t talking about his case. But on Market Street, after court was adjourned Monday, Verdi was seen standing at a variety stand buying a lottery ticket.

“I’m trying to win some money,” he explained to his lawyer. But when he scratched off the ticket, Verdi saw that he had already lost.

Verdi’s case has been in the news for a while. The investigation of Chappy’s hit the media in 2008. Three years later, in 2011, Verdi resigned from L&I under a cloud of suspicion. The federal indictment against Verdi followed in 2014.

Last year, a Florida man, Mario Fresta, 37, of Cape Coral, pleaded guilty to one count of extortion in connection with Chappy’s. In announcing the guilty plea, the FBI described Fresta as a Verdi associate.

The feds claimed Fresta instructed O.N.E. Rittenhouse, a bar and nightclub, that if it bought its beer from Chappy’s, Verdi would use his official position to benefit the bar.

The FBI contends the bar hired Fresta as a manager for $400 a week, plus they paid out $300 a week in cash kickbacks to Verdi and other L&I officials to prevent them from shutting down the establishment.

The kickbacks amounted to 39 cash deposits totaling more than $19,900, the FBI alleges.

Fresta is on the witness list and is expected to testify at the trial as a witness for the prosecution. Verdi, however, has told friends that he had no idea what Fresta, who used to date Verdi’s daughter, was up to, and that he never received any cash.

As head of the city's Nuisance Task Force, Verdi would track down contractors and homeowners who were doing home improvements without proper permits.

It won’t be a surprise to any of Verdi’s friends if the guy who used to describe himself as a “hands-on” deputy commissioner takes the witness stand in his own defense.

The big question about the Verdi case is why it has dragged on so long.

Friends say that Verdi has turned down multiple plea bargain offers, insisting that he didn’t do anything wrong. When he was warning bar owners about possible task force raids on their establishments, friends say, Verdi was merely passing on messages that the cops asked him to deliver.

A former city official who has known Verdi for decades said the speculation around town is that the feds have been squeezing Verdi for years to give them information he doesn’t have.

“The real Dominic Verdi would do anything to help anybody to make it easier to get through the system,” the former city official said about Verdi. “But he wouldn’t take anything for it.”

Verdi would track down contractors and homeowners who were doing home improvements without proper permits. He would also drive around the city looking for violators.

Verdi became popular with reporters. His exploits gave the media plenty to write about, both good and bad.

In 1995, with the press in tow, Verdi, on patrol for L&I, saw a woman painting a nightclub that had been shut down by L&I. He flashed his badge and asked if he could come in and inspect the place.

When the woman refused, Verdi told her, “Well, we can do it the easy way or the hard way.” Moments later, he slapped a cease-and-desist order on the building.

His work on L&I’s task force started in 1997, under former L&I Commissioner Ed McLaughlin, a former police inspector. Verdi was issued a police radio and a bulletproof vest. When he and another fellow L&I official, the late Kevin Daly, were raiding bars around town, they were nicknamed “Doom and Gloom.”

In subsequent years, the task force fell under the umbrella of the district attorney’s office, but it also worked with the Philadelphia Police Department, Pennsylvania State Police, Pennsylvania Liquor Control Board, and the Pennsylvania state Attorney General’s Office.

To the cops, L&I was useful because its officials could get into bars and night clubs without a search warrant, if the owners let them in voluntarily. But to Verdi’s critics, which included many of the angry bar owners he busted, and civil libertarians, Verdi was the leader of a goon squad.

In 2009, Verdi was loaned to the police department, where he continued to work on the task force until he retired in 2011.

Over the years, the critics of Verdi’s raids included a federal judge.

In 1999, U.S. District Court Judge James McGirr Kelly issued a summary judgment against the city that cost taxpayers a settlement of $350,000. The judge ruled that Verdi and other L&I officials repeatedly violated the civil rights of two lawyers who bought a former convent in South Philadelphia and were renovating it into a house.

“Undaunted by the Constitution and Supreme Court precedent, and undeterred by the city’s own code, defendants steadfastly maintained their absolute right to proceed unchecked into plaintiff’s home,” the judge wrote.

Verdi and other L&I officials who raided the house acted “with a general disregard for the law, punctuated by a false verification and repeated misrepresentations to courts,” the judge wrote.

But Verdi’s friends would rather tell you stories about his more heroic exploits. Such as what happened on New Year’s Eve 2000, when Verdi showed up at an apartment building on Rittenhouse Square.

A sprinkler valve had broken and the basement was flooded. The power went out and the building had to be evacuated. New Year’s Eve revelers were walking around carrying candles and hors d’oeuvres.

At 11 o’clock that night, who was going to find a plumber to fix the valve? But it was Verdi’s idea to locate plumbers at the Philadelphia Housing Authority, who happened to have the exact sprinkler valve that broke at Rittenhouse Square.

With police sirens blaring, the cops, at Verdi’s direction escorted the PHA plumbers to Rittenhouse Square, where they fixed the valve, and preserved the sanctity of New Year’s Eve.