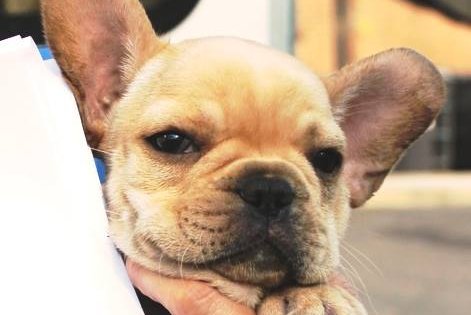 Twenty-six French and English bulldogs were confiscated from a hot van in New Jersey over the weekend.

Twenty-six French and English bulldog puppies were rescued after they were left unattended in a Walmart parking lot in North Jersey over the weekend.

The animals were found loaded in two crates inside a van on Saturday in Garfield, Bergen County, after being flown into Newark Liberty International Airport from Colombia with plans to be transported to Florida, NorthJersey.com reported.

The Bergen County Society for the Prevention of Cruelty to Animals rescued the dogs after getting a tip that someone was attempting to sell them in the Walmart parking lot.

Debbie Yankow, director for the Bergen County Animal Shelter where the animals were transported, said the puppies' health was being closely watched since they spent a long period of time in the car while temperatures flirted with 90 degrees.

“If they were in the van any longer, they most likely would not have survived,” Yankow told NorthJersey.com.

The animal shelter posted an update on its Facebook Monday and said "hundreds" of people have expressed interest in the puppies but that they will be in isolation for three weeks and need to be vaccinated.

Those interested in adopting a puppy will have to complete an application and drop it off in person, the shelter stressed.

"The puppies will not be able to be seen until they are out of isolation and cleared in the court system," the shelter said. "When that time comes, we will let you know on Facebook. Please understand, our greatest concern right now is their health and well being."

The Bergen County SPCA is also investigating the incident.