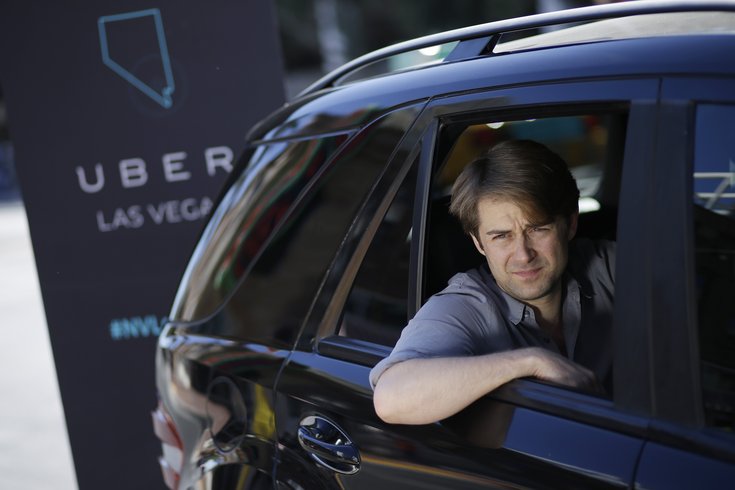 Uber West Coast Regional Manager William Barnes sits in the back of a car during a photo shoot Friday, Oct. 24, 2014, in Las Vegas. The ridesharing company has begun operations in Nevada.

Rideshare giant Uber confirmed this week that it will conduct tests of its self-driving vehicles at a site next to its new research facility in Pittsburgh, part of a strategy one company official said will be key to the long-term future of transportation.

Uber's Advanced Technologies Center in Pittsburgh will be expanded on the Almono site as part of a plan to spur Phase One of the Monongahela riverfront redevelopment. In partnership with Carnegie Mellon University, the company will renovate an old automotive roundhouse for its permanent facility and will work closely with the local community to construct a temporary test track that will remain at the Almono site for the next three to five years.

Uber representative Jeff Fullerton indicated that the company will employ local contractors to complete the track, which will be bordered by a green space featuring the work of local artists and microhabitats.

"Self-driving technology has the potential to drastically cut down on accidents and congestion while making transportation even more affordable and convenient for everyone," said John Bares, Director of Uber's Advanced Technology Center. "The adoption of this technology at scale is likely still many years off, but the Steel City is a terrific place to invest now and in the future.”

The scope and progress of Uber's research on self-driving cars has not been widely publicized, but it is among several companies, led by Google, who plan to capitalize on the technology to enhance existing rideshare services. Early last year, the company hired 50 robotics engineers from Carnegie Mellon to lead in the development of self-driving cars.

Given Google's head start on road testing and the company's plans to deploy autonomous vehicles in confined areas like college and corporate campuses, Uber's investment in the technology could prove essential to its survival in the transportation network industry. Other companies pursuing autonomous vehicles include Apple, Ford and Tesla.

The redevelopment of Pittsburgh's Almono site will be led by a partnership between the Benedum Foundation, Heinz Endowments, RK Mellon Foundation and the Regional Industrial Development Corporation.

Don Smith, president of RIDC, said the goal of the new partnership with Uber is to create a sustainable community with a significant economic impact.

"The vision of Almono has been to create a world-class sustainable development that extends the commercial impact of the region’s major research centers," Smith said. "The partnership announced today is the first major step in realizing the vision.”

Uber continues to finalize details for the facility expansion and plans to break ground on the project in the coming months.