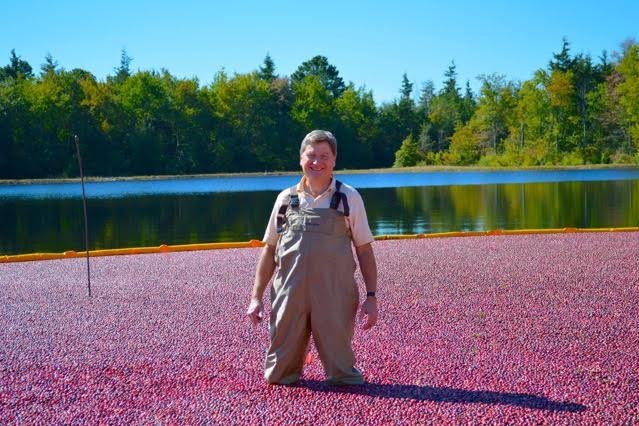 South Jersey's Mark Lohbauer, seen standing in a cranberry bog, was recently replaced as the chairman of New Jersey's Pinelands Commission after serving for five years. He's had an unconventional career in public service.

You might say that Mark Lohbauer traveled an unconventional and winding path through public service and politics.

Which may explain the calm he's shown since losing the chairmanship of the Pinelands Commission.

He smiles about his recent demotion, then laughs.

“I’m complex, but steadfast in belief,” he says of the twists in his public life.

He also took an unorthodox route to a seat on the Pinelands Commission, an independent state agency whose mission is to "preserve, protect, and enhance the natural and cultural resources of the Pinelands National Reserve, and to encourage compatible economic and other human activities consistent with that purpose."

As a young man, Lohbauer was a Democrat due to his love of the environment. He became a Republican due to the Vietnam War under Democrat Lyndon Johnson. His party affiliation was cemented when a methane leak from a municipal dump in his hometown of Pennsauken was ignored by ruling Democrats.

He remains a Republican today, but he's supporting Democrat Bernie Sanders’ candidacy for president due to his socialist embrace of issues that once mattered to idealistic New Jersey Republicans such as Christie Whitman and Tom Kean.

As an assistant state treasurer when Whitman was governor, Lohbauer spent much of his tenure vetting groups and giving them state money – which conversely led him to a career in the private sector.

What he learned was the state’s attempts to “make it look pretty doesn’t make jobs.”

And worse, he said, since Whitman’s time in office, the Republican party “has not cared for urban issues,” at all. He became so disenchanted by his fellow Republicans in the 1990s, Lohbauer eschewed party politics for years.

All of which made him an unlikely choice when Gov. Chris Christie tapped him in 2011 for the New Jersey Pinelands Commission. And not just as a member: he was brought on as the commission’s new chairman.

“I’m not really sure how I became chairman,” he says. “We never talked about it.”

Lohbauer’s main question of Martin was this: “I’m free to vote my own conscience?”

The commissioner assured him he could; not once as chairman was he contacted about pending policy votes, he adds.

Which is largely why he’s uncertain if Christie's decision to remove him as chairman – he remains on the commission in a holdover capacity – had anything to do with his vote two years ago against a controversial, 22-mile natural gas pipeline proposed to run from Millville in Cumberland County to a power plant in Upper Township.

About 10 miles of its course would run through the protected Pinelands.

The pipeline was proposed as a way to “repower” the aging B.L. England coal-fired energy plant as a gas-fired operation, with natural gas piped in via the proposed 22-inch main.

That the gas would likely come from the fracking fields of neighboring Pennsylvania made the pipeline an even greater lightning rod for environmental groups.

The commission voted down the pipeline in January 2014 by a 7-7 vote with one recusal. (Lohbauer voted against it.) But it was ultimately approved by what environmentalists called an end-run.

The commission’s executive director and her staff ultimately signed off on the project, saying it did not need a public hearing and a vote. Just recently the state’s Board of Public Utilities also signed off on the plan. A legal challenge of the BPU decision followed. It is expected to take a year or so.

Just after the BPU approval Lohbauer learned that a new chairman, Sean Earlen, was being named by the governor to lead the regulatory commission. Earlen, a Republican, voted in favor of the pipeline two years ago.

Lohbauer diplomatically says he can’t be certain why he was “demoted” thought he’s happy to remain on the commission.

But he did offer a parting observation about how decisions and alliances get made:

“Red (Republicans) and blue (Democrats) are not the drivers," he said. “But it really is the green – big money.”