Union 1, Montreal 1: Player grades and analysis for a late stumble 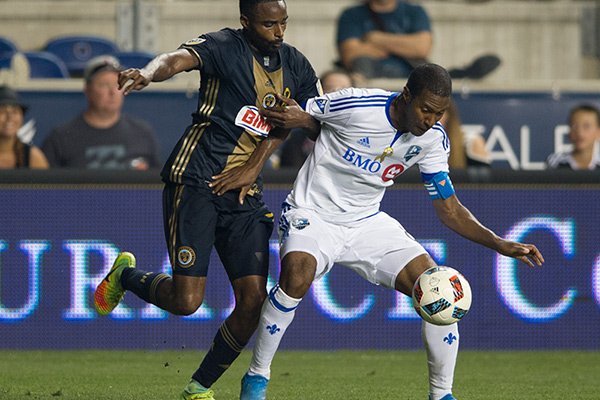 Warren Creavalle battles with Patrice Bernier during the Union's 1-1 draw with Montreal on Saturday night.

Put a fat asterisk on this result and hope you don't have to revisit it five weeks from now.

The Union dropped two points in a 1-1 draw with Montreal on Saturday night, the club's last home match before entering an arduous stretch of three-straight road games.

Philadelphia maintained its three-point, fourth-place cushion, but blew a big opportunity to widen the gap over the Impact. Orlando's Sunday loss in Los Angeles was a positive, though, and it kept the Union seven points above the playoff line with five games to play.

This is crunch time for a team in unfamiliar territory. Not since 2013 has the Union been this close to a playoff berth in mid-September. This time last year, we were previewing the U.S. Open Cup final as the Union meandered through the remainder of a meaningless regular season schedule.

These last five games are all about showing some mettle, closing the deal, and qualifying for the postseason for the first time since 2011.

After the game, Jim Curtin pointed out that his team has had some costly defensive lapses in late-game situations. You probably remember Steve Birnbaum's equalizer in the 2-2 away game with D.C. Simon Dawkins had the 83rd-minute goal for ten-man San Jose in a 1-1 draw. Cristian Maidana knocked in the 95th-minute game-winner in Houston.

The Union coughed up five points from those three goals alone.

From Saturday, then, watch the replay of Matteo Mancosu's equalizer and focus on Warren Creavalle and Josh Yaro.

When the play starts, you see Yaro marking Mancosu with Creavalle on the far post. Fabinho is on the near post. Alejandro Bedoya looks to be with Ambroise Oyongo in front of Andre Blake. The Union seem to be matched up well and they've got ten guys pulled back in defense.

The only thing that I find interesting is Tranquillo Barnetta's positioning. We've seen him occupy this position on set pieces throughout the season, where he sort of floats above the near post but doesn't take a mark.

In principle, the Union generally stay away from "zonal marking." They normally man-up on set pieces without leaving free players for mop-up duty. This time, though, Barnetta tries to close the gap on Hernan Bernardello when Montreal plays a short corner to the top of the 18. 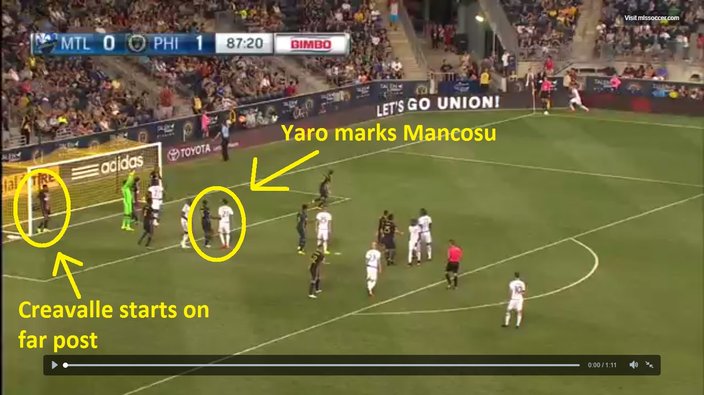 As the ball is rolled out to Bernardello, Fabinho and Creavalle (correctly) come off the posts. When you don't have a marker, and you're assigned to the post, you're generally taught to push out when a short corner is played in order to re-establish an offside line.

With nobody on Bernardello, he's able to clip a first-time ball into the mixer. Roland Alberg is marking Donny Toia, who flicks nicely to the back post. You see Josh Yaro has come off of Mancosu, who peels to the back post without a marker.

Creavalle, who didn't start the play with a mark, is closest to the ball after the flick and attempts a clearance, but can't read the hop. Mancosu heads in from a tight angle. 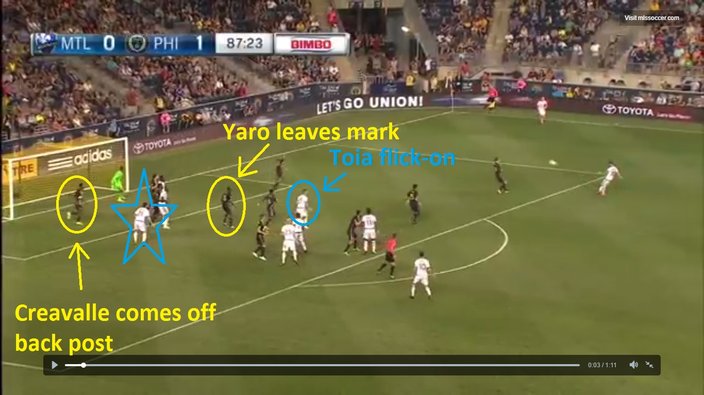 Maybe a left-footed player can clear on the bounce, but that's a "bang-bang" play with the ball coming through traffic. Creavalle pivots and tries to reach it with his right foot, but it's just a bit out of reach.

I really wouldn't put a ton of blame on him in this situation. Alberg could have been better in the air. Barnetta could have had a better starting position. Yaro should have stayed on his man instead of abandoning Mancosu when the short corner was played.

In these cases, you need to hold your mark, show some urgency, and want it more than the other guy.

The Union need more from the center-forward position, and by “more,” I mean goals.

C.J. Sapong failed to score for the fifth-straight game. He hasn't found the back of the net since July 27th and has zero assists to boot.

Forwards go through these droughts, but that's not even the biggest concern. The primary issue is that Sapong isn't even logging shot attempts.

That's a brutal line from your center forward, and it shows a couple of things.

One, the midfield isn't giving him enough opportunities. Every time Sapong works his butt off in the hold-up game, he hustles back towards the box to look for return service. He's not getting it, and when he does, he always seems to be just one step away from a tap-in.

Second, he isn't a guy who will create his own shot. You're not going to see Sapong receive the ball, turn, beat a defender and fire on goal. He's just not that type of player. He won't sit on the back shoulder and cross-up center halves like Marco Di Vaio. He won't pull wide to find space like David Villa. 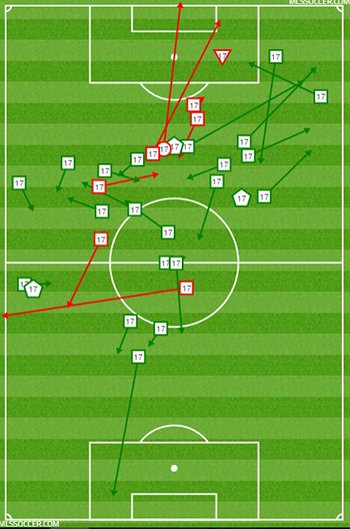 Here's his partial chart from Saturday night. I filtered this to only include shot attempts, passing, drawn fouls, and losses of possession.

That red circle outside the box is the long-range effort, which was his only shot attempt of the game.

The red triangle inside the box is the dispossession when he sat on the ball for too long and lost it after originally getting behind Montreal's backline on a Laurent Ciman mistake.

And the rest is business as usual. Aside from that chunk of green on the right, most of his passes are short layoffs going sideways or backward. He earned three fouls from his hold-up play and tracked back defensively, sometimes coming way too far inside his own half.

Again, it is what it is. It's never an issue of effort or commitment with Sapong. He's a target forward and he's never going to be a 15-goal scorer. I thought we might see him finally hit double digits this season, but he's running out of time. He needs three goals in these final five games to hit a career high.

They need more from him, and if he's tired, then he needs a rest.

I'm just not a fan of playing him in that wide right position.

That said, he had a couple of chances on goal, one of which was a turn-and-shoot that he hit right at the goalkeeper. The second came from about 17 yards out and he hit it over the crossbar.

Herbers did get the assist on Barnetta's goal, which was a right-footed flick before he took a foul from Oyongo. The referee played advantage and Barnetta did the rest. Maybe you can give it as a half-assist.

He also drew the penalty that wasn't called.

A beautiful run and hit for the Union's only goal.

Otherwise, Barnetta didn't log the numbers he usually does, and didn't seem to get on the ball enough early. He lost three dribbles in attacking situations and only tried two shots. He also didn't draw fouls the way he normally does.

This was his return to the No. 10 spot after deputizing at the eight last week.

He seemed a bit off in this game, with a couple of cheap fouls and a sequence of shirt-pulls that the referee spotted.

This was the first time that Pontius had been held without a shot attempt since late June.

Defensively, he's always solid and helps Fabinho on the left side of the shape.

Mostly absent in the first half with some wayward touches and passes.

Bedoya showed some defensive bite in the second 45, despite an odd sequence where he failed to clear from the box and conceded a corner.

The spacing and chemistry between Bedoya and Creavalle is clearly a work in progress, but he needs to learn that he can get on the ball in those deep positions, just like Vince Nogueira did. When that happens, Creavalle will shift forward and allow Bedoya to shuttle.

He played a good game despite the two scenarios that people were killing him for.

The first was the Patrice Bernier miss when Montreal played a quick switch and hit a perfect ball behind the defense. Yes, he was late tracking Bernier into the box, but the entire Union squad fell asleep on that play.

The second is the equalizer, which we already went over.

Truth be told, he was better than Bedoya in this game. His passing was sharper and his recognition was smarter. He got stuck in on numerous occasions and a had a goal-saving interception in the second half.

He didn't get much of a challenge from Lucas Ontivero, who got beat up early and quickly faded from the game.

He was busy waving for an offside call when Bernier ghosted behind him and fluffed a sitter from two yards out.

Later, he was caught in no-man's land on a Drogba knock down that Creavalle cleaned up.

Marquez logged two clearances and two interceptions and didn't have a ton of action come his way.

We talked about him leaving his man on the equalizer, which put him in a position where he couldn't influence the play at all.

Otherwise, he had a balanced defensive performance and put out a number of fires.

Solid both ways, as usual.

Two good stops on Mancosu were the product of quickly coming off his line and making himself big.

Ilsinho needs to be back in the starting lineup and needs to start finishing chances.

Not enough time for him to do much of anything.

Inconsistent with cards and calls throughout the game, he got the penalty completely wrong.

He also missed a horse-collar on Ignacio Piatti leading up to Barnetta's goal, so if we're judging his entire body of work, those two bad calls actually evened out.

I could write a book about MLS officiating, but what's the point?