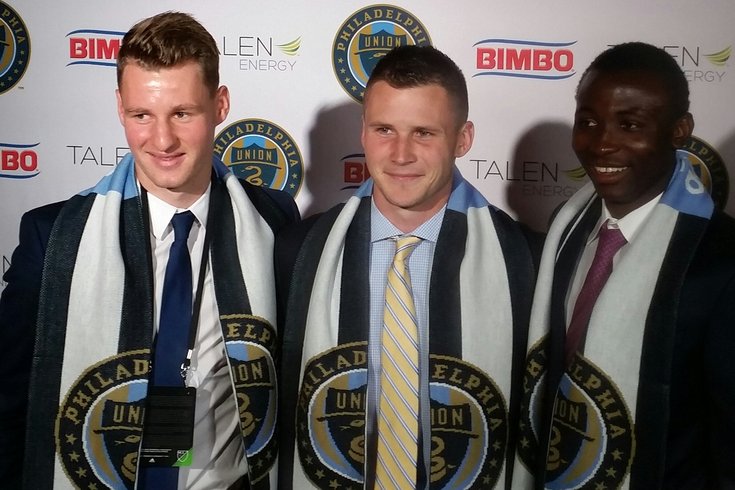 Fabian Herbers pulls up to the far side of the Union training facility on a four-wheeled Toro utility vehicle.

These small-engine carts are usually reserved for moving equipment or groups of players after a session, but we missed our connection on Monday morning, so this seemed like the quickest way to get from the Chester wharf building to Talen Energy Stadium.

Two days prior, the rookie forward scored his first professional goal in a 1-0 win for Bethlehem Steel over FC Montreal. Herbers' 43rd minute strike was the first goal scored in Steel franchise history.

In addition to Friday night's shift with the second team, Herbers has made three senior team appearances, all as a second half substitute for C.J. Sapong. The rookie spoke about his Union experience over four months.

Philly Voice: Thoughts on Friday night's game? You got the first goal of your professional career.

Fabian Herbers: Yea that's true. It feels good, although it was with the second team. It's always good to play 90 minutes, to play and gain some confidence. The goal certainly gives me a lot of confidence going into the next week now.

Philly Voice: It looked like a difficult finish, the ball sort of popped up in the box. What was going through your head at that moment?

Herbers: I got a good cross from Walter (Restrepo) and took the first touch with my chest. The ball popped up a bit, and the keeper was coming, I wasn't sure if he was trying to tackle me or not. But he hesitated a little bit so I was able to get the ball down and one-time finish it with my left foot. Luckily, it went in.

Philly Voice: Was it weird to play, I guess after playing three games with the Union, to put on a different shirt play with Bethlehem Steel? Some of the guys you know and others you don't know.

Philly Voice: I guess if Bethlehem Steel doesn't exist, then this weekend you're just sort of hanging out and doing whatever, right?

Herbers: Exactly. Like I said, it's good for me to gain some confidence, and that goal especially. But it's important for a lot of guys to play 90 minutes, to get those minutes in. If you're traveling with the Union, it's hard to get playing time, maybe you get a couple of minutes or you don't even play. You don't get into your playing rhythm. You can always show yourself in practice, but it's not the same. So it's good to have the opportunity to play with Bethlehem Steel and gain some confidence.

Philly Voice: How do you feel about your first three Union appearances so far?

Herbers: It was amazing. First experience, I was pretty nervous. That was down in Dallas, my debut. But it was a great experience for me to get some minutes in a real professional game and a big stadium in front of almost 20,000 people. I was also really grateful to get my first home appearance as well. The fans are great and so supportive of the team. It feels way better to play home, rather than away.

Mark it down, folks! Fabian Herbers scores the first ever @BSteelFC goal! https://t.co/HgyFinhP5B

Philly Voice: It looked like you had a chance to score in the New England game. There was a tight-angle shot in the final minutes.

Herbers: Yea, I got the ball from Seba, from across the box. It was a tight angle, but yea, I wish I had scored that. I hit it one time and the keeper made a great save. Maybe a little more left or right and it could have gone in, but it is what it is.

Philly Voice: What's been the biggest difference between the pro game and the college game?

Herbers: It's just way faster. You don't have as much time on the ball anymore. When you receive the ball, there's always somebody on you. You have to play quicker. You can't just do whatever you want anymore. In college you can run around with the ball, and if you lose it, it's okay. But here it's more competitive and you want to do well, and connect faster, and you don't want to upset teammates. So yea, you just have to play fast.

Philly Voice: Do you feel comfortable with the coaching staff, your teammates, and the training environment?

Philly Voice: Where are you guys living?

Herbers: We're in South Philly, it's an apartment complex.

Philly Voice: What kind of roommate is Keegan?

Herbers: He's very organized, so that's good (laughs). I'm a little more relaxed, but he's organized and on top of things. He cleans everything up as well.

Philly Voice: How about you?

Herbers: I'm organized, but not as picky as he is. I like to keep my stuff clean, but if it's there, say for a like a day, then it's okay, I'll just clean it up next time.

Philly Voice: So you guys were both rookies and just ended up living together?

Herbers: Yea, we knew each other from the draft and from the Georgetown vs. Creighton connection. Josh (Yaro) was kind of an independent guy. He wanted to live on his own, so (Keegan and I) were texting back and forth about rooming together, since it's cheaper with two guys. We got along very well in preseason when we were still living in the hotel, and we said, 'let's do it, why not?'. Cole Missimo and Ken Tribbett are living (in the same complex) too. They're living right underneath us, so it's good, it's four of us there.

Philly Voice: Did you know how to drive one of those Toro utility vehicles?

Herbers: They actually just showed me. That was my first time driving it.

Herbers: Yea, I've been around (center city) a couple times. I don't have a car yet. I'm still working to get my license approved. I have a German license that I need to get approved and transferred to a Pennsylvania license. So I'm still working on that, and then I'll be driving around more.

Herbers: Yea, he's driving me around every time (laughs). I kind of feel bad about it.

Philly Voice: That's what teammates are for.

Herbers: Exactly. It's all good.