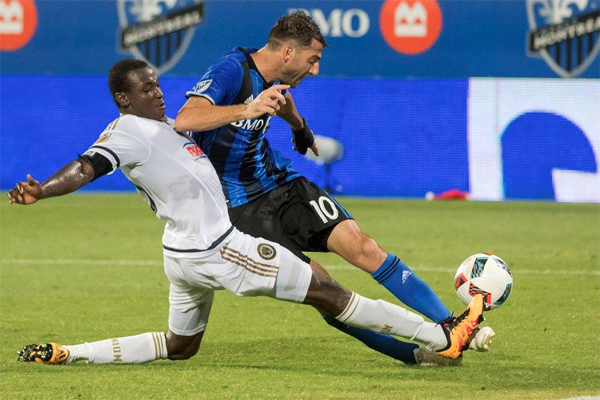 Philadelphia Union starters had wrapped up training by the time media showed up on Wednesday morning, but a second-team scrimmage featured the long-awaited return of defender Josh Yaro.

The second-year center back was a full participant, playing without restriction after missing the last three months due to preseason shoulder surgery.

Yaro says he's taken a few upper body hits but hasn't had experienced any discomfort since returning to the field.

"I think I was held out until it was appropriate for me to come back," Yaro said after the session. "It's been smooth so far and I haven't had any issues with it. Soccer is a contact sport. People run into you and you run into people. That has happened and everything seems to be fine."

Yaro had surgery to repair a torn right labrum back on February 7th. His initial projection was three to four months on the shelf, which turned out to be accurate.

It's the same shoulder he injured last June, which caused him to miss three games. Yaro did not have surgery at the time, nor did he have a year-end medical procedure. The Georgetown product suffered two concussions and an MCL sprain in the fall, resulting in more time missed, including the playoff game in Toronto.

"That's part of being a professional athlete. You have to get over injuries. Every job has it's ups and downs and I think injuries are just a part of what we do. When I get out there, I just think about what I have to do on the field. That's all I can think about. I can't think about external factors. I just have to me, and play and try to follow the instructions I'm given by the coaches."

Yaro will likely play for Bethlehem Steel before rejoining the Union first team, but don't expect it to happen this week. Head coach Jim Curtin said at his weekly press conference that he hopes to get Yaro into a proper game at the beginning of June.

Steel has a pair of Sunday games on June 4th and June 11th. The Union play at New York City on June 3rd before hitting a two-week international window. June 4th would be ideal for a substitute appearance, with a full start on the 11th, which could then theoretically allow him back into the Union gameday roster on the following weekend.

"It's been great to watch him in training now," Curtin said. "He doesn't really have a 'half speed.' He goes full speed in training all the time, whether he's going into tackles or – sometimes you're cringing when he goes into a tackle or uses his  shoulder to push off of somebody. But he feels great. Today we went through two, solid 15 minute periods, so 30 minutes of high intensity against a Steel team that was setup to play similarly to (weekend opponent) Real Salt Lake.

"He held up very well and did a good job winning his 1v1 battles, but also wasn't breathing as heavily afterwards. All of that is coming along. We're happy with where he's at. He adds a lot to the group and is a really good piece to be getting back now."

Everything about this play is perfect. Yaro/Barnetta/Rosenberry triangle, Le Toux outlet to relieve pressure: https://t.co/a3ibfeYtiK

The issue is finding a role for Yaro on a squad that already has two defensive mainstays sitting on the bench.

Keegan Rosenberry and Richie Marquez, who started 77 of 78 combined games last season, are both currently out of favor and/or form. Jack Elliott, Oguchi Onyewu, and Ray Gaddis currently comprise three-fourths of a defense that has allowed just one goal during the Union's four-game winning streak.

That doesn't look to be changing anytime soon, and why should it? You know the saying about fixing things that aren't broken.

What Yaro's return will do is give Curtin another hard decision to make. For now, a backline that's +10 on goal differential since May 6th shouldn't change, but there's no doubting the fact that Yaro is still the future at one of two center half spots.

For what it's worth, Yaro partnered with Marquez in Wednesday's second-team scrimmage. Rosenberry played right fullback with Giliano Wijnaldum on the other side, completing a backline that some projected to be starting at this point in 2017.

The depth really is there.

"I think I'll fit in well," Yaro added. "It's a matter of when I come back and when I'm healthy. I really don't think right now is the right time for me to have that discussion because the reality is that I can't play in a game, fully, right now. When I'm back, that's when I'll think about it. But I trust that the coaches are always going to put out a lineup that's going to win and a lineup that is going to help the team. I respect that decision, whoever they play.

"The goods news is that when you are able to make a lot of those changes, it means that you have a deep squad and good players who can step up. That's healthy competition."