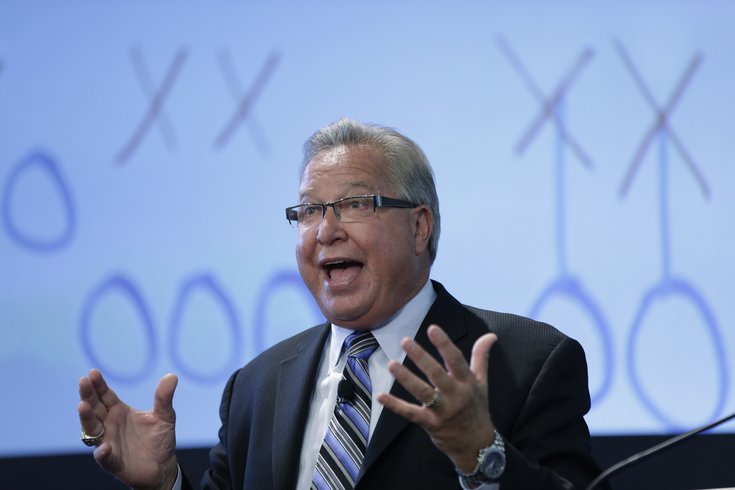 When the Eagles were looking for head coaching candidates, they turned to the help of former Eagles quarterback Ron Jaworski for some guidance. Therefore, whenever Jaworski talks about the Eagles, it's worth giving him a listen.

Today, appearing on Mike Missanelli's show on 97.5 the Fanatic via telephone out in Fargo, North Dakota for Carson Wentz's pro day, Jaworski discussed some of the quarterbacks in the 2016 NFL Draft at length. Wentz was the focus of the conversation, but Jaworski also spoke about Cal's Jared Goff, Memphis' Paxton Lynch, and the Eagles' plans to add a quarterback in the draft.

The most interesting quote was in regard to the Eagles possibly taking a quarterback with the eighth overall pick.

"Teams will start jockeying up if they really like (a quarterback)," said Jaworski. "Don’t discount the Eagles moving into this mix either. I got a funny feeling quarterback is on their list. I’m not sure they can push up to get one of these two guys, but they’re going to get a quarterback somewhere in this draft to build for the future.

"If one of those two guys is (available at pick number eight), I believe they would go in that direction. I think on their board there are going to be quarterbacks rated very high."

One of the criticisms of Wentz, which is really outside of his control, is that he played against "inferior competition" in college at North Dakota State. Jaworski was less concerned about that because of the type of offense Wentz ran there.

"When I watch the tape I saw a guy who has all the attributes of being a rock-solid NFL player," he said. "Sometimes we don’t spend enough time looking at these programs like North Dakota State University, but they run a multiple offense, pro-style offense, where he’s under center, he’s in the shotgun, different multiple things they do. Their vertical passing game, their horizontal passing game, the reads they make, the checks they make at the line of scrimmage -- it’s a pro-style offense.

"When we talk about Penn State and Ohio State, quite honestly they’re about two of the most remedial offenses I’ve watched this entire offseason. So sometimes you have to drill down a little bit and look at some of these smaller college programs that have talented players and how they project, because of the system they play in. This is a kid that I think projects well because of the system he played in at North Dakota State University."

"Today Wentz was 62 of 65," Jaworski said. "He had one drop and he overthrew two wide receivers. He missed those guys by about a foot. And these were guys, they were 5’9 white guys running go routes. He didn’t have much to work with."

Jaworski made a comparison of Wentz to himself.

"Look at me. I went to Youngstown State and lasted 17 years in the NFL. I think guys have to play, and he played. He played his last two years. I think that when we evaluate guys, you certainly have to look at the level of competition.  There’s no question that becomes important. But if you see the attributes to play the position, it’s still football. You still have guys trying to bend your facemask when they get to you. You still have to move in the pocket and feel for the rush. It may not be playing against Auburn University or Notre Dame, but some of these smaller division schools play pretty darn good football. And remember, they don’t have all the great players that some of these guys like Cardale Jones does. They’re playing with inferior talent themselves."

Wentz created some waves today when many analysts said he had a terrific pro day. Jaworski agreed.

"Today Wentz was 62 of 65," he said. "He had one drop and he overthrew two wide receivers. He missed those guys by about a foot. And these were guys, they were 5’9 white guys running go routes. He didn’t have much to work with.

"But I think the one thing when you look at this kid Wentz, the tape shows he’s a really good player. If you drill down a bit and you talk to the players, his teammates that were watching this workout, you talk to the coaches, and you see the kid face-to-face, he’s a hard worker, and he’s only really been a starter for three years – his senior year in high school and two years at North Dakota State. So he’s a young quarterback that hasn’t taken a pounding or a beating. He has a mental approach to his game that everyone says is very good. His Wonderlic test was a 40, which is very, very high. He’s obviously got intelligence. So when you start putting all the pieces of the puzzle together, you know you have a rock-solid quarterback. I project him well to the NFL, but we all know this is a crap shoot every single year."

And finally, Jaws touched on a few of the other quarterbacks in this draft as well.

"You can’t leave Jared Goff out of this discussion," he said. "He is a very, very talented quarterback. He does things in some areas much better than Carson Wentz. I’m just not going to say Carson Wentz goes No. 1 as a quarterback.

"I really do like Paxton Lynch down in Memphis as well. I think he’ll be a top 15 pick. I think he’s an athletic Joe Flacco; 6’7, he’s got really good movement, he had some trouble with the scheme down there when they got some pressure on him. He didn’t handle the pressure very well when it was in his face, that sort of thing, and that’s to be expected. But when you look at the physical skill set, that guy can really rip some throws.

"I think there are a good six or seven quarterbacks in this draft that will go in the first three or four rounds."