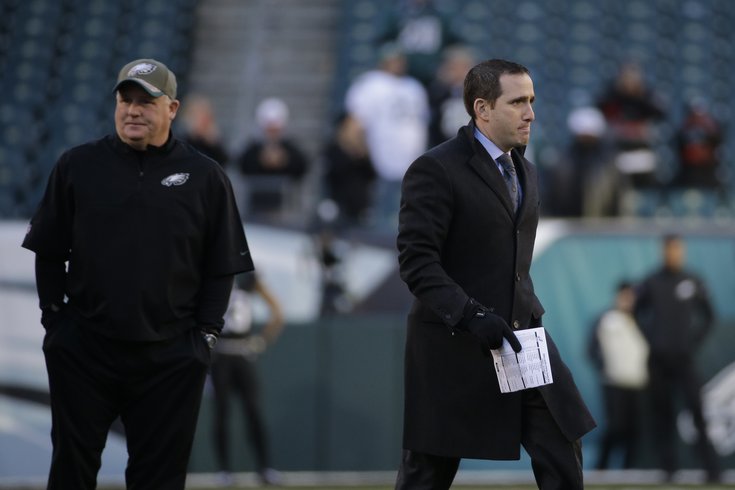 BOCA RATON, Fla. – In 2015, as we all know, Chip Kelly had full control of the Philadelphia Eagles, or more specifically, final say over the 90-man roster. Kelly revealed this morning at the NFL owners meetings that the contracts were negotiated by Howie Roseman. More specifically, Kelly was asked if Roseman negotiated the contracts for Byron Maxwell and DeMarco Murray, two players Roseman traded a year later largely to get rid of their deals.

"Oh yeah," said Kelly. "I’ve never negotiated a contract in my life. I have nothing to do with any contract."

Kelly also revealed today that he and Roseman did not speak. When asked if it might be a good idea if the head coach with full roster control had some kind of direct communication with the person negotiating player contracts, Kelly responded, "Yeah, you’d think."

"It wasn’t set up that way," he continued. "I wasn’t the personnel guy. I was in charge of the 90-man roster, but I didn’t negotiate and say, ‘This guy gets this amount of money, and that guy gets that amount of money.’ That wasn’t what I did. (Vice President of Player Personnel) Ed (Marynowitz) was the one who ran our personnel department. That really fell on Ed’s shoulders in terms of how he handled everything. And Ed communicated with (Roseman) all the time. I mean, that’s how it worked, that’s how it was set up."

In other words, Marynowitz served as a buffer between Kelly and Roseman, which Kelly stated was the intended structure, not because of personal differences between the two. It was set up intentionally that way, according to Kelly, by "the organization," which is probably better stated as owner Jeffrey Lurie.

"I wasn’t in charge of (saying), ‘Give x money to who.’ That wasn’t my role," Kelly explained. "‘Here are the players we evaluated that we think can help.' We never came up with any parameters. I wouldn’t have paid anybody. I’m really frugal.

So if we're translating the above into simpler terms, here's a summary of how Kelly acquired free agents:

• Step 3: Player shows up to practice, likely with way more money than he deserves.

How could any reasonable human believe this is a structure that could work in any way?

...unless of course Lurie was purposely setting up Kelly for failure, or, you know, if Kelly is lying through his teeth.