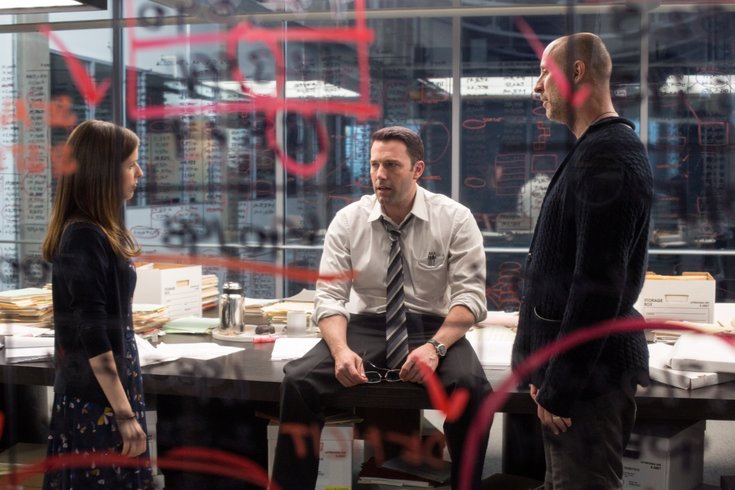 Anna Kendrick, Ben Affleck and Gavin O'Connor on the set of 'The Accountant.'

In most Hollywood movies that deal in financial intrigue and the rough-and-tumble underworld, there are usually a few distinct archetypes in play: the brilliant egghead who cracks codes and the musclebound scrapper who cracks skulls. The one’s as lethal with his fists as his compatriot is with Linux commands.

The model of efficiency, veteran director and University of Pennsylvania graduate Gavin O’Connor opted to brew those traits and more into a single, unconventional hero in his latest film.

“The Accountant” is about as unconventional as big-ticket action gets, from its complex mathematical thrust to its sensitive and surprising treatment of autism spectrum disorder, two touchstones history tells us are damn difficult to capture on screen.

Known for “Tumbleweeds,” “Miracle,” “Pride and Glory” and, most recently, the excellent MMA-centered family drama “ Warrior,” Long Island native O’Connor knew from an extremely young age that he wanted to create, whether with pen and paper or Super 8 camera. It was a passion encouraged by his late father, an NYPD officer who went out of his way to expose his son to art. The elder O’Connor, recalls his son, was an easygoing guy who could often be found “playing his guitar in the squad car”; he remembers watching “The French Connection” with his dad in theaters at the age of 6.

Sports, however, ended up dominating most of O’Connor’s young adult life. Growing up, he was a standout football player, which landed him at Penn in 1982. An outside linebacker with a knack for nailing the quarterback, he racked up 9.5 sacks during the 1985 school year, then a Penn record; he also formerly held the career sacks record. Each of the three seasons O’Connor played varsity ended with the Quakers capturing the Ivy League title. 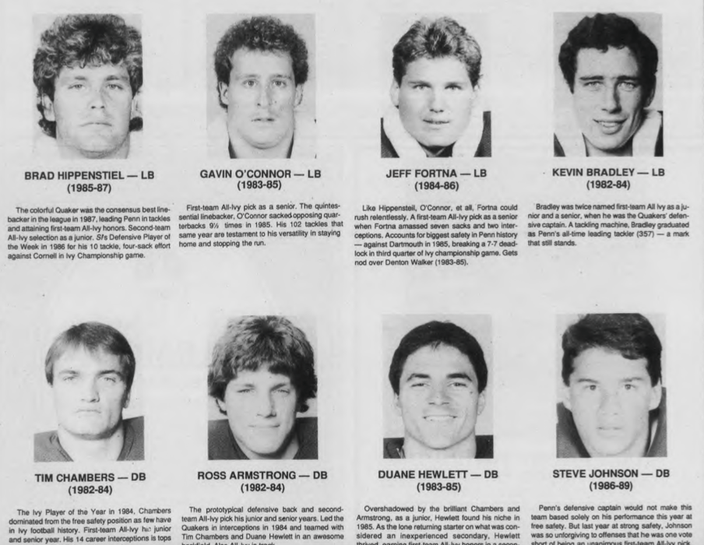 Gavin O'Connor once held the career sacks record at the University of Pennsylvania.

When he wasn’t on the field, he was “hanging out at The Ritz, watching foreign films and writing really bad screenplays,” jokes O’Connor, still built like an athlete more than 30 years removed from the gridiron. (He paid a visit to Franklin Field during his recent press-tour stop in Philly.)

After briefly flirting with the possibility of pursuing a professional career in the NFL, O’Connor made the decision to pivot back toward the arts, returning to New York. After establishing himself with the breakout indie vehicle “Tumbleweeds” and mainstream hit “Miracle,” about the 1980 U.S. Olympic hockey team, O’Connor really started to find his groove as a filmmaker, exploring themes that resonated with him both personally and artistically.

Both NYC police drama “Pride and Glory” and “Warrior” deal heavily with the complicated dynamics governing the bonds between fathers, sons and brothers.

“Whenever you’re dealing with family, you’re in the territory of love,” says O’Connor, who has a twin brother and several half-siblings. “Whether it’s giving love, receiving love, [or] the absence of love — it’s very fertile. There’s potential for great drama.”

He also happens to be deadly accurate with a sniper rifle from a full mile out.

It’s a proclivity he’s carried over to “The Accountant,” which stars Ben Affleck as Christian Wolff, a gifted but socially stilted small-town ledger jockey who we methodically learn wields power in some nefarious underground circles around the globe. (Yes, he’s the hyper-analytical brainiac who can tame a Fortune 500 firm’s books in a single evening — but he also happens to be deadly accurate with a sniper rifle from a full mile out.)

Through flashbacks, we learn that Christian has a strained relationship with both his father (Robert C. Treveiler) and close-in-age brother (Jake Presley). Much of this backstory is centered around the character’s childhood diagnosis of autism spectrum disorder, a major aspect of the movie to which O’Connor and Affleck dedicated extensive time and resources. The director and actor interviewed multiple leaders in the field to gain a better understanding of both the challenges and gifts of individuals on the spectrum. One expert, Dr. Laurie Stephens, got the men into Exceptional Minds, a nonprofit school in California that provides multimedia training to young adults with ASD. Here, they had the opportunity to meet and learn from men close in age to the character of Christian; actor Seth Lee, who portrays Christian as a child, had the opportunity to sit in on classes with younger students. 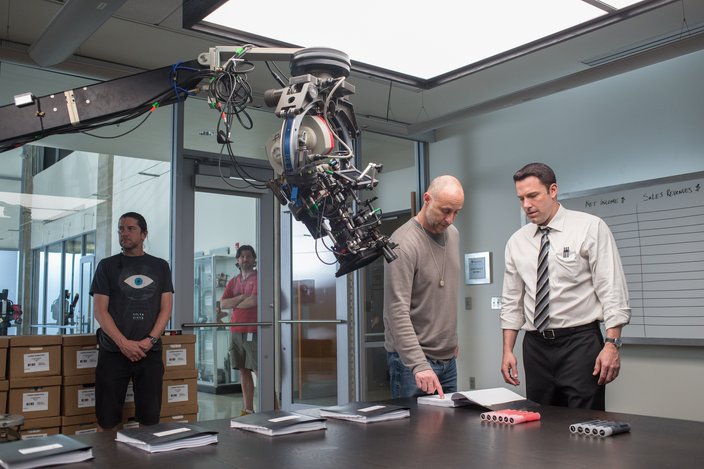 Director Gavin O'Connor and Ben Affleck on the set of 'The Accountant.' They both spent time at Exceptional Minds, a nonprofit school in California for young adults with autism spectrum disorder.

“We learned that everyone on the spectrum is different in their own nuanced ways,” says O’Connor, who previewed "The Accountant" for Autism Speaks and received the org’s stamp of approval. “In a lot of ways, people on the spectrum are more exceptional than we are. They view things differently; they experience things differently. It doesn’t make it worse or better. I can tell you that me experiencing things through them was eye-opening [and] riveting.”

“Because he’s a math savant, he’s going to eliminate people in a mathematical way,” says O’Connor.

This research manifests itself in a number of ways in the movie. There are lots of little things, like Christian’s straightforward affect in conversation or the particular manner in which he organizes his kitchen and workspace. But it informs splashier cinematic moments, too. The character’s ruthless hand-to-hand combat style is based on Pencak Silat, a class of Indonesian martial arts that is both fluid and scary-efficient.

“Because he’s a math savant, he’s going to eliminate people in a mathematical way,” says O’Connor. “Why spend more time than I have to to do it? [Pencak Silat] had all that.”

Such attention to detail was not reserved for the film’s portrayal of ASD. O’Connor also worked with a team of forensic accountants to help him check Christian’s work — the numbers had to be accurate, lest all the bean counters in the theater storm out in anger. He’s received excited emails from accounting clubs across the country, eager to see a badass version of themselves on the big screen.

“We were pretty good about making sure everything added up,” says O’Connor, whose own accountant will be flying from New York to L.A. for the premiere. “But I’m sure someone will find something that we did wrong.”

They wouldn’t be accountants if they didn’t. 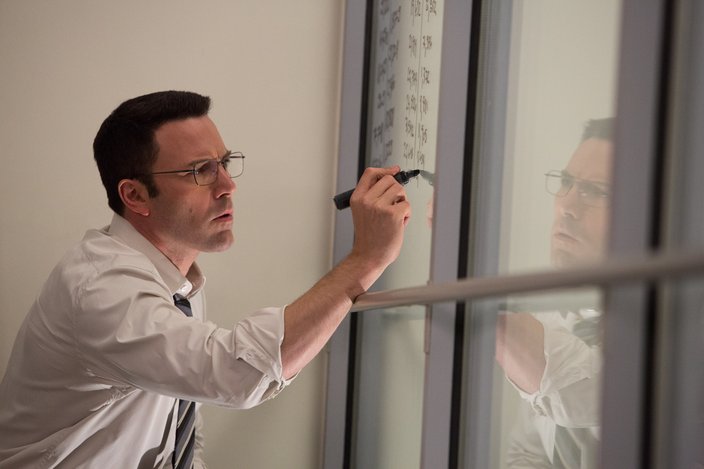 Ben Affleck plays a multi-talented genius in 'The Accountant.'