Emiliano Rodriguez, 44, allegedly purchased the airbags and other parts from China in order to increase profits 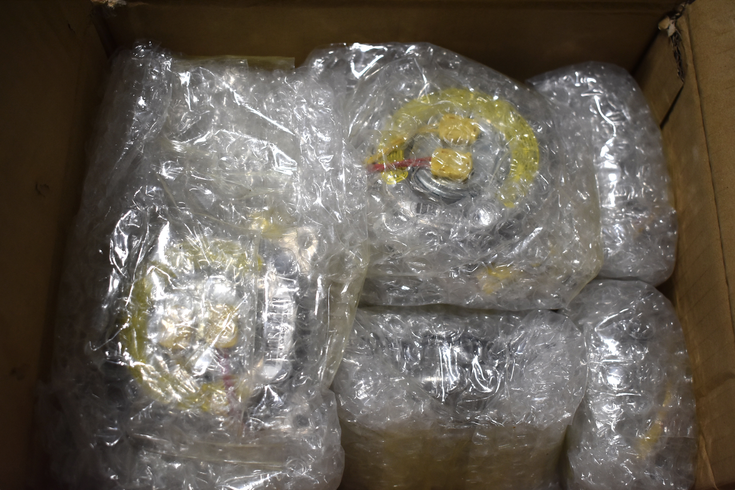 The airbag gas inflators pictured above were seized by U.S. Customs & Border Protection officers as part of a larger investigation into Emiliano Rodqriguez, a Philadelphia auto mechanic who has been charged with buying and installing counterfeit airbags and other parts in used cars that were resold to consumers.

A Philadelphia man is facing federal charges for allegedly obtaining hundreds of cheap, counterfeit airbags from China and installing them in used cars, which he later sold to unsuspecting consumers, according to federal prosecutors.

Emiliano Rodriguez, 44, a citizen of the Dominican Republic residing in Philadelphia, is a trained auto mechanic who allegedly ordered the counterfeit airbags and used them to dupe car buyers from at least January 2017 through October 2019, investigators said.

Counterfeit airbags that are imported to the United States bypass testing and have not been proven safe to use. China is the world's largest exporter of these counterfeit commodities, including airbags that people can use to increase profit margins on the sale of used vehicles. The same practice is done with other car parts, as well.

Customs and Border Protection officers discovered 12 airbag gas inflators in an international air parcel that arrived from Hong Kong to Philadelphia on Sept. 12, 2019. Due to the poor packaging and quality of the shipment, CBP officers detained the airbag inflators as possible counterfeits and turned them over to Homeland Security Investigations agents.

When Rodriguez was apprehended by federal agents at the conclusion of an ensuing investigation, more than 450 counterfeit airbags and other parts were seized from his residence and business, authorities said. Rodriguez allegedly installed his counterfeit parts in salvaged cars before they were reintroduced to the consumer market.

“The hazards posed to unsuspecting motorists and the general public by the alleged actions of the defendant in this case are enormous, and could have ramifications for years to come,” said U.S. Attorney Jennifer Arbittier Williams. “Safety equipment as important as vehicle airbags are subject to strict quality control standards to keep everyone safe, therefore when corners are cut by utilizing counterfeit goods, the consequences can be disastrous."

Airbag inflators use an immense gas explosion to immediately deploy vehicle airbags when sensors detect a collision. The National Highway Transportation Safety Administration says counterfeit air bags have been shown to consistently malfunction in ways that range from non-deployment to unexpected deployment to the expulsion of metal shrapnel during deployment, CBP officials said.

Individuals and collision repair shops commit airbag fraud when they replace deployed airbags with counterfeit airbags that are deeply discounted and purchased through non-certified online vendors, including those in foreign countries.

Consumers have resources to protect themselves when purchasing used vehicles.

The National Insurance Crime Bureau offers a free VINcheck to determine if a vehicle may have a record of an insurance theft claim, or if it has ever been reported as a salvage vehicle.

Additionally, NHTSA offers advice on airbags and lists airbag recall information. The following consumers may be at risk of owning a vehicle with a counterfeit air bag:

• Consumers who have had air bags replaced at a repair shop that is not a new car dealer franchised to perform the repair;

• Consumers who have purchased a used car that may have sustained an air bag deployment before their purchase;

• Consumers who own a car with a salvage title

• Consumers who have purchased replacement airbags from eBay or other non-certified sources —especially if they were purchased at unusually low prices (i.e. less than $400)

The charges against Rodriguez come in the midst of a steep market for used cars in the U.S., where prices have increased throughout the pandemic. Demand for used cars has gone up partly due to a shortage of new cars. A larger shortage of microchips, which are vital to electrical components in cars, has led to fewer new vehicles and higher mark-ups at dealerships — which drives more buyers to the used market.

There also has been an alarming spike in carjackings in Philadelphia over the past year, a trend that may be driven, in part, by the increased value of these vehicles.

“Counterfeit airbags pose real dangers to unsuspecting members of the public. The risks of counterfeit and substandard auto parts are known by those who work in the automotive industry,” said William S. Walker, acting special agent in charge of Homeland Security Investigations in Philadelphia. “Yet, Rodriquez, an auto mechanic, allegedly outfitted salvaged automobiles with counterfeit airbags imported from China and reintroduced those vehicles back into the consumer market, thereby putting lives at risk in the interest of making a profit."

Rodriguez is charged with one count of trafficking in counterfeit goods and two counts of causing the delivery of hazardous materials by air carrier in connection with a scheme to utilize counterfeit goods in used vehicles.

If convicted, Rodriguez faces a maximum possible sentence of 20 years in prison, three years of supervised release, fines of $2,050,000, and a $200 special assessment.