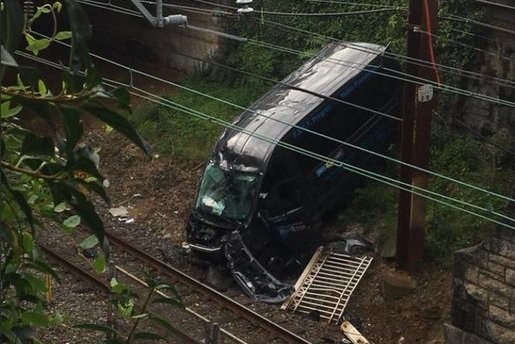 A van involved in an accident in West Philly on Tuesday morning barreled down an embankment onto SEPTA tracks.

A van involved in a West Philadelphia crash Tuesday morning barreled down an embankment and onto SEPTA Regional Rail tracks.

SEPTA said it was alerted to the vehicle on the tracks around 8:25 a.m. The van was involved in an accident at 49th Street and Kingsessing Avenue and ended up nosediving onto the Media/Elwyn Line tracks right next to 49th Street Station.

The accident caused downed wires and a crane has been brought in to lift the van out, according to a SEPTA spokesperson.

Elwyn: Train #9331 will be the first train to depart Suburban Station for service to Media-Elwyn at the scheduled time of 9:34 AM. Passengers between 49th Street and Secane Station should board on the inbound platform.

NBC10 reports that the Nissan van collided with a Hyundai Sonata, causing the van to crash through a bridge fence and onto the tracks. Police told the news station that the van driver was hospitalized but in stable condition, while the driver of the sedan and her 13-year-old passenger were hospitalized with undisclosed injuries.