Velasquez 'back to normal,' but will he rejoin Phillies next week? 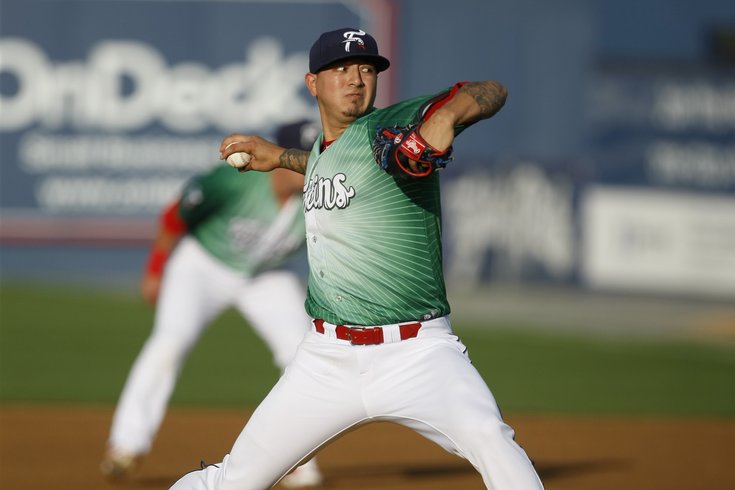 Phillies starter Vince Velasquez during Wednesday night's read start in Reading. He hasn't pitched in over two weeks since going on the disabled list with a right biceps strain.

READING, Pa. – Vince Velasquez didn’t come up through the Phillies minor league system, so you’ll have to excuse him if he’s unfamiliar with the rules of the Pennsylvania turnpike.

Before getting back in his car and back on the road, from Reading to Philly, the 24-year-old Southern California native jumped on his phone to pay a fine upwards of $30. Vinny from South Philly forgot to grab the toll ticket at the beginning of his day trip to Baseballtown.

Thankfully for the Phillies, everything went smoothly for Velasquez after he arrived at FirstEnergy Stadium.

Velasquez served up a home run to the first batter he faced, Akron shortstop Todd Haskins, but allowed just one more hit in the next five innings and felt “back to normal” when his 76-pitch outing ended.

It was Velasquez’s first game action in exactly two weeks: he left the Phillies game on June 8 after throwing just two pitches and landed on the disabled list two days later with a right biceps strain.

“I feel good, everything is fine,” Velasquez said in the Double-A Reading’s clubhouse on Wednesday night. “Talking to the guys behind home plate with the radar gun, everything seems like it’s back to normal. I kind of took a peek at their speedometer and it was 97. That kind of shows I’m back to normal.”

Velasquez hopes to rejoin the Phillies rotation in five days, when the team takes their current nine-game road trip to Arizona.

But the Phils could opt for a more cautious route for the pitcher with an electric arm and with durability issues throughout his minor league career. Velasquez has pitched more than 100 innings just once (in 2013 in A-Ball) since he was drafted by the Houston Astros six years ago this month.

“I went 76 (pitches), one more pitch (then the plan),” Velasquez said. “That was today’s objective, go at least five (innings) and get 75 in. I did that. Talking to (pitching coach Bob McClure), he pretty much wants me to go two (rehab starts). But I’m good, I’m ready to go.”

So he’ll be back in the Phillies rotation in five days?

Will he have to fight McClure to get there?

“If I have to,” Velasquez said with a laugh.

The reeling Phillies (losers of eight straight entering Wednesday) and their struggling starting staff (3-13 with a 6.06 ERA and MLB-worst 1.624 WHIP in June) could use any kind of boost right about now. Still, it’s highly unlikely they’d rush Velasquez back when there really is no reason to do so if everyone is wisely keeping the bigger picture in mind.

The competitor in Velasquez obviously wants to get back onto a major league mound as soon as possible. But he was also honest in his own performance on Wednesday night, which began with a home run on the fourth pitch he threw.

“I was just trying to get a good feel back,” Velasquez said. “I kind of tend to look back on (two weeks ago). It’s always how I’ve been, I think about the past. I had to push myself through it and trust myself and know that everything is fine, trust the trainers.”

Once he got his groove back, Velasquez struck out three, walked one, and saw at least a couple of hard-hit line drives land in gloves, including a leaping catch at the center field wall from Cuban import Osmel Aguila.

“When you make one little mistake bad things can happen in the big leagues,” Velasquez said. “There were some pitches that I threw today that we're right over the middle, but there were others I gave up that were line drives and you never know what could happen up there. We’ll see what happens after my next bullpen.”

And where will that next bullpen be — in Philly in between minor league starts, or in San Francisco with the Phillies this weekend?

The answer might not be the one Velasquez wants to hear. But there is still three months remaining in the season, too.

Perhaps a three-week break wasn't the worst thing in the world for Velasquez, who was able to find some self-deprecating humor in pitching five innings on Wednesday. He hadn't thrown five innings in a major league start since May 17.

"(It was good) to gather up everything, mentally and physically," said Velasquez, who has a 4.82 ERA in 10 starts since his 16-strikeout complete game in April. "Gave a little break on my arm. Probably get another start, one or two, before the All-Star break, take that week off, and get ready for the next half."