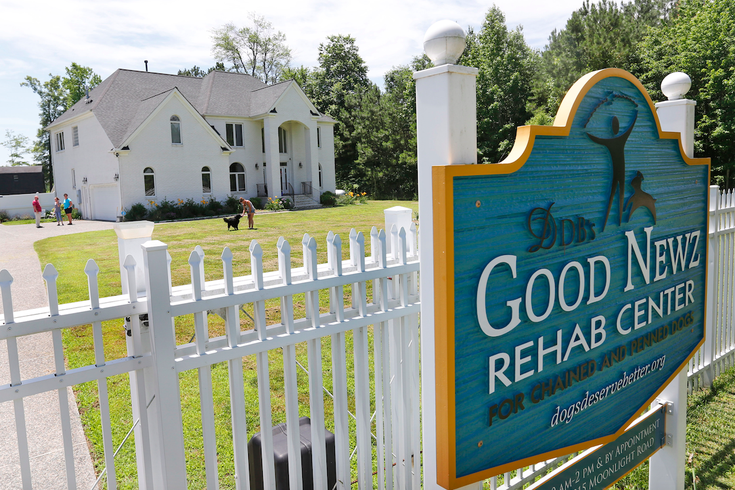 The infamous Bad Newz Kennel where former Eagles quarterback Michael Vick ran a criminal dogfighting ring has been reinvented as a haven for the recovery of abused dogs.

The 15-acre property in Smithfield, Virginia, became the subject of a gruesome 2007 investigation that turned up an interstate gambling ring, evidence of brutal executions and more than 50 dogs bearing scars from dogfights and otherwise abusive conditions.

Vick ultimately pled guilty and served 18 months in federal prison before being reinstated to the NFL and signing with the Eagles in 2009. Many of the dogs who were found at the site went on to be rescued or placed in an animal sanctuary. As Vick resurrected his career, he pledged to play an active role in youth engagement and advocacy for animal welfare through his work with the Humane Society.

The property, purchased in 2011 by non-profit Dogs Deserve Better, has since been transformed into a refuge known as Good Newz Rehab Center, the Daily Mail reports. Run by Founder Tamara Thayne, the estate includes a 7-acre yard and amenities for all of its dogs, who are accepted regardless of breed, size, age or history. The non-profit describes its mission on its website as a place to help abused dogs regain trust in human beings.

From our Rehab Center for Chained Dogs, we change the lives of dogs who come from nothing—pitiful creatures chained by the neck or ostracized to a small pen—who exist outside and alone; in mud, dirt, snow, rain, heat, cold, and often without food, water, or shelter.

According to the Associated Press, however, the rehab center has not been without its own share of controversy. In 2012, a pit bull terrier was seized by Surry County authorities and Thayne was charged with animal cruelty and failure to provide adequate care to a companion animal. After no evidence of cruelty was found, a judge ordered that the dog be returned, prompting Thayne to file a federal lawsuit as contributions to the rehab center fell from $1.1 million in 2012 to $317,138 in 2013.

To date, the organization estimates that it has rescued, rehabilitated and adopted out more than 400 chained or penned dogs. In the future, Dogs Deserve Better hopes to expand the house into a super center with a veterinary clinic and room to house more than 50 dogs.