Video: Black Lives Matter organizer tells white people to 'get to the back' 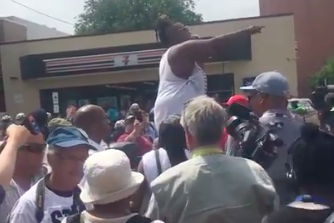 As the Democratic National Convention enters its final day in Philadelphia, footage from several of the week's protests has been circulating online in what are largely peaceful, if intense, displays of organized opposition.

One video that emerged from Day Two of the DNC protests shows a tense moment of disagreement during a Black Lives Matter march near the intersection of Broad and Diamond streets. One of the march organizers can be heard insisting that all white people, including members of the media, move to the back of the group.

There has been no official comment from the Black Lives Matter movement on the incident or its general policy concerning the status of white supporters relative to the organization and its affliliates. On the official Black Lives Matter website, however, the group clarifies a misconception that the movement "hates white people":

The statement “black lives matter” is not an anti-white proposition. Contained within the statement is an unspoken but implied “too,” as in “black lives matter, too,” which suggests that the statement is one of inclusion rather than exclusion. However, those white people who continue to mischaracterize the affirmation of the value of black life as being anti-white are suggesting that in order for white lives to matter, black lives cannot. That is a foundational premise of white supremacy. It is antithetical to what the Black Lives Matter movement stands for, which is the simple proposition that “black lives also matter.” The Black Lives Matter movement demands that the country affirm the value of black life in practical and pragmatic ways, including addressing an increasing racial wealth gap, fixing public schools that are failing, combating issues of housing inequality and gentrification that continue to push people of color out of communities they have lived in for generations, and dismantling the prison industrial complex. None of this is about hatred for white life. It is about acknowledging that the system already treats white lives as if they have more value, as if they are more worthy of protection, safety, education, and a good quality of life than black lives are. This must change.

The same document addresses 10 other misconceptions about Black Lives Matter, including the notion that they are fundamentally opposed to police officers:

Police officers are people. Their lives have inherent value. This movement is not an anti-people movement; therefore it is not an anti-police-officer movement. Most police officers are just everyday people who want to do their jobs, make a living for their families, and come home safely at the end of their shift. This does not mean, however, that police are not implicated in a system that criminalizes black people, that demands that they view black people as unsafe and dangerous, that trains them to be more aggressive and less accommodating with black citizens, and that does not stress that we are taxpayers who deserve to be protected and served just like everyone else. Thus the Black Lives Matter movement is not trying to make the world more unsafe for police officers; it hopes to make police officers less of a threat to communities of color.

As friction continues in communities across the United States over recent acts of violence against both minorities and police officers, care should be taken not to consider the video above as a definitive example of what Black Lives Matter represents. The movement as a whole has adopted a multiracial platform of acceptance that emphasizes and condemns those disparities that specifically affect African Americans.

Earlier this month, at City Hall, several dozen white protesters interrupted traffic to convey the importance of supporting minorities regardless of skin color. At issue, for many, is the characterization of "white privilege" as an inherited injustice that implicates all white individuals, indefinitely, in a historical system and structure of oppression. In the late 1960's, similarly fraught relationships had to be developed when many of the Black Panthers' ideals were supported by Pun Plamonden's White Panthers and other minority groups.

What's important to remember is that while a movement may be united, it is rarely a homogenous group. Nuances pertaining to geography, history and political predilection result in varying degrees of affiliation and identification.

While the video above likely serves to inflame reservations about the movement (the messaging of these moments is arguably the central roadblock to any conceivable form of lasting reconciliation) it is both a singular distraction from practical goals and also a regrettable example of what African-American people have confronted in much more public venues throughout the history of the United States.

As this concerns the rest of the Democratic National Convention, the week's protests have largely been without serious incident, though some of the most intense conflicts took place in South Philadelphia late Wednesday night. Seven people were arrested for attempting to climb a metal fence in a federally restricted area at Broad Street and Pattison Avenue. Another protester was hospitalized after she caught fire while stomping out a burning flag.

Earlier Wednesday, 10 protesters were detained after they staged a sit-in outside the Comcast Center. As of Thursday, a total of 103 demonstrators received citations carrying $50 fines.