Is it *actually* healthy? 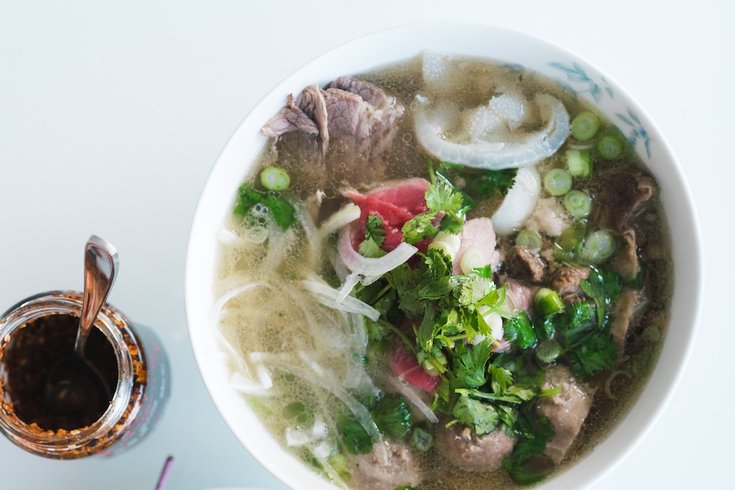 When cold weather hits, soup is the main food group for two major reasons: 1. It will literally warm you up, and 2. It's oh-so comforting. One of the top contenders in the soup game is Vietnamese pho, a meaty broth-based soup with white rice flour noodles, beef or chicken, spices and topped with a medley of herbs, bean sprouts, hot chiles, and a lime.

In addition to being very filling, pho has been referred to as a "miraculous bowl of soup that can cure (almost) anything." But is it actually good for you? Many Asian dishes miss the healthy mark for a variety of reasons including high sodium counts and hidden calories.

According to Real Simple, pho is 100 percent nutritious.

“Made with rice noodles and a rich beef bone stock, it's a perfect vehicle for bean sprouts and nutrient-rich herbs,” nutritionist Rachael Hartley told the magazine, which noted that pho ranges from about 350 to 500 calories on average depending on the size of the portion and the type of meat or seafood you might throw in.

There are a few tweaks you can make to raise your pho to the next nutrition level. Start by adding brown rice noodles instead of white rice noodles, which generally lack nutritional value, for an extra punch of fiber. Additionally, throwing some carrots, broccoli or spinach into your pho is another great way to increase the nutrition in your bowl.

Oh, and if you're worried about the sodium content of pho, here's what you should know: You'll consume about 384 milligrams of sodium in a serving of pho soup. That translates to about 26 percent of the 1,500 milligrams of sodium recommended daily by the American Heart Association.

If you want to get *extra* healthy with your pho intake, check out this "detox" pho recipe via Epicurious.