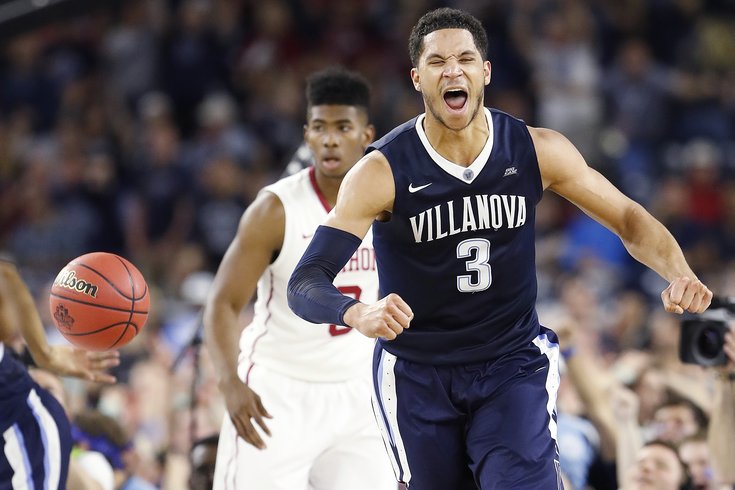 Villanova's Josh Hart reacts during his team's 44-point win over Oklahoma in the Final Four.

Just over 48 hours after putting up the most dominant Final Four performance of all time, Villanova will face a tough North Carolina team with its first title in 31 years on the line.

The Tar Heels will present a different set of challenges for Jay Wright's team, but after the way the Wildcats demolished Oklahoma over the weekend, they seem up for just about any test. Here's a look at what you can expect as these two teams meet in the NCAA Tournament for the third time  -- UNC won the previous two games -- in the last 11 years.

MORE 'NOVA COVERAGE: A brief history of Villanova-North Carolina in the NCAA Tournament | Standing between 'Nova and national title is UNC's offensive rebounding | For Villanova, another historic shooting performance in Final Four | Why Philly shouldn't host parade if Villanova wins NCAA tourney | Ryan Arcidiacono carrying ’Nova on a back that almost ended his career | Villanova coach Jay Wright has never forgotten where he came from

And now onto our staff predictions…

I wrote extensively about the problems that UNC presents ‘Nova with on the offensive glass. Those are legit, and they could very easily be the reason why Roy Williams gets his third national title later tonight.

I think we need to look at it the other way, as well: How the heck is UNC going to guard a ‘Nova team that has run roughshod through the NCAA Tournament? Brice Johnson is a beast on the glass, but what happens when he has to guard Kris Jenkins 22 feet from the hoop? What happens if ‘Nova controls tempo and makes this about halfcourt execution? This has a chance to be a fantastic game.

UNC is going to face a major step up in competition. Their last three opponents were 5 (a good 5, but still), 6, and 10 seeds. ‘Nova had to go through a 3, 1 (the best 1), and 2. I’m not sure if it matters all that much, but the Wildcats are more battle-tested coming into this game.

This is a final between to very deserving teams, but Jay Wright’s group is playing inspired basketball right now. I think the Wildcats are going to bring a second national title back to the Main Line.

Following the Wildcats' big 23-point win over my alma mater (Miami) in the Sweet 16, I was hesitant to believe that Villanova could maintain that level of play in the following game against Kansas. And although it won that game by five, it didn't look nearly as impressive. What was impressive, however, was the fact that the Wildcats were able to take down the No. 1-overall seed in the tournament in a game in which they didn't shoot anywhere near their best.

And then there was whatever you want to call their 44-point win over Oklahoma in the Final Four. I've watched a lot of basketball in my day, and that was probably the best single-game performance I've ever seen from any team at any level. It's not like they were playing a team that was completely overmatched either -- Villanova was just a 2.5-point favorite.

Against UNC, 'Nova suddenly finds itself an underdog – much like it was against Kansas – and Daniel Ochefu and Co. will almost certainly have a tough task containing Brice Johnson and the Tar Heels on the glass. Still, Villanova has the ability to neutralize that disadvantage if they shoot anywhere close to how they did against the Sooners.

But Villanova isn't actually as good as it's looked this tournament. That's not to say the Wilcats don't belong in this game, but if they played at this level all season, they wouldn't have lost five games. After all, it was just five games ago that they lost to Seton Hall in the championship game of the Big East Tournament.

What if that Villanova team shows up Monday night?

Luckily for those preparing to party on the Main Line tonight, I don't see that happening.