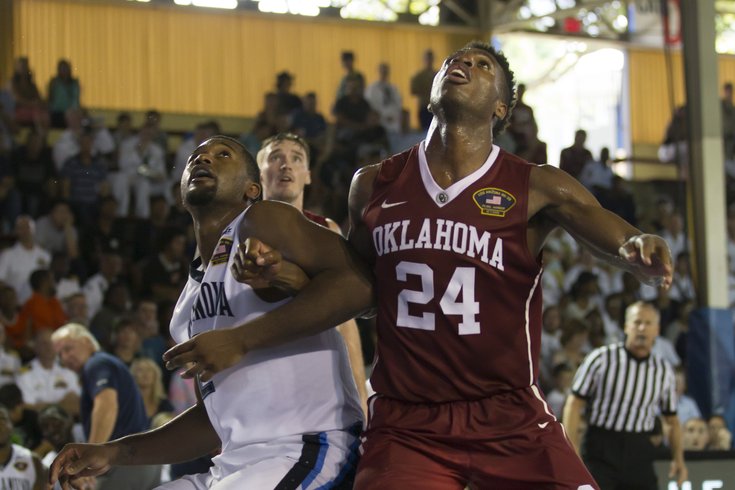 For the first time all NCAA Tournament, the Villanova Wildcats are facing a team that they've already played this season -- the Oklahoma Sooners.

This meeting in the Final Four, unlike the 23-point drubbing Jay Wright's team suffered back in early December, features a Villanova team playing at its best. It has outscored opponents by an average of 25 points per game so far and knocked off the tournament's No. 1 overall seed, Kansas.

With a win, the Wildcats will advance to their first National Championship appearance since they won it all as an eight seed back in 1985, the first year the field was expanded from 32 to 64 teams.

But in order to do that, they'll need to get past Buddy Hield and a Sooners team that knows this game won't be as easy as the last time these two teams met.

And now onto our staff predictions…

Villanova hasn’t let me down all tournament — Your boy is 7-0 picking tourney games involving local teams, bee tee dubs — and they honestly haven’t come close. But man, 23 points is a lot to think about, even if it was in a small gym 5,000 miles from Philly almost four months ago.

Lon Kruger believes that game came down to poor shooting vs. great shooting, and that is true to a large extent. Although, the crazy part is that 'Nova did a good job on Buddy Hield that game (6-17 shooting), as they have against their opponents’ highest-usage player all season. It didn’t matter, as the Sooners still torched 'Nova from deep. From the Wildcats’ standpoint, the Perry Ellis thing wasn’t a fluke but Buddy is a whole different animal. Still I don’t think Jay Wright is going to let Hield win the game by himself.

I’m not worried about offense for ‘Nova. The Wildcats' shot selection and overall approach have come a long way from that 4-32 performance behind the arc. From here, the key is how the Wildcats defend the Sooners other than Hield, specifically from beyond the arc. Isaiah Cousins, Jordan Woodard, and Ryan Spangler shot 7-12 from deep in Hawaii, and they’re plenty capable of putting up a similar performance.

I just think they won’t quite get there.

There are just four teams left standing and, to be quite honest, Villanova has as good a chance as any to cut down the nets in Houston on Monday night. First, however, they face the difficult task of shutting down Buddy Hield, It's not just that the Sooners senior can fill it up (25.4 PPG), but it's how efficiently he does it that makes him even more dangerous; he shoots over 50 percent from the field and 46.5 percent from three (and takes almost nine per game).

That said, Villanova doesn't have any problem scoring, even if they don't have anyone quite like Buddy. And that's a good thing. Because the Wildcats get their points from a variety of different players, a cold shooting night from one of them hardly spells the end of their chances. Just look at what they were able to do against Kansas -- a 64-59 win on a night they shot just 40.2 percent -- compared to their win over Miami -- a 92-69 blowout just two days earlier. Totally different games, same result.

However, Hield didn't have his best game when the two met in Hawaii back in December -- 18 points on 6-of-17 (35.3 percent) and four rebounds -- and Oklahoma still won by 23 points. But like I said at the top, this isn't the same Villanova team.

The sad thing here is that no matter who wins, either Hield or Ryan Arcidiacono (and Daniel Ochefu) will be playing in his last collegiate game Saturday night. And since I've picked against Villanova in each of the last two games (vs. Miami and Kansas), I'm going to keep that trend going today. The last thing I want is you blaming me for jinxing them.