The final round of voting for the sweet 16 of the all-time Sixers one-on-one bracket is here, and this round features some heavy hitters — Julius Erving, Andrew Toney, Chet Walker, and the rambunctious Lou Williams.

As a reminder, here's what the Julius Erving region looks like after being updated to reflect results from the first two rounds of voting. It is absolutely loaded: 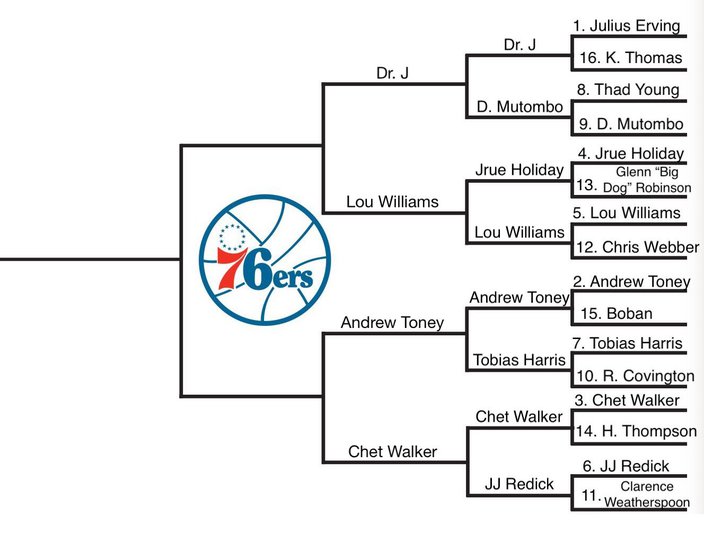 Here's how the matchups shook out in the second round for this region.

Erving absolutely ran away with his matchup against Mount Mutombo, who must have gotten a vote from a family member, and Lou Williams squeaked out a victory over Jrue Holiday, which was easily the most compelling of these matchups. Holiday was an All-Star and a very good defender during his time in Philadelphia, so I think there was a case for him, but I don't blame the people for sticking with the guy who gets buckets.

We move to the matchups for today's round, and as a reminder, you can still vote for the other matchups in different regions if you haven't already. Elite eight begins next week.

There is no question who is the better player between the two here. There is no question who has the physical advantage here. Are we completely sure Erving would win a one-on-one matchup anyway? To finally reach the promised land, the Sixers needed to flank Erving, a do-it-all sensation, with an electric two-guard (Andrew Toney) and one of the best big men (Moses Malone) of all-time, the latter winning the MVP award in the season where Philly finally got over the top and won the title.

Okay, you're right, I am overthinking this. Long before Moses Malone came through and pushed the Sixers over the top, Erving was a consistent, at times elite scorer in big situations, certainly not the reason the Sixers fell short in some of their failed NBA Finals runs. Philadelphia's 1977 Finals loss to the Portland Trailblazers is often remembered for the 2-0 lead the Sixers squandered as massive series favorites, and rightfully so because that team was loaded. What doesn't often get brought up is Erving dropping 37 and 40 points in the final two games of the series, with his Game 6 performance (40 points, six rebounds, eight assists, two steals) one of the all-time performances in a loss in Finals history.

It is notable, of course, that Erving's jumper was never quite up to the level of a lot of his game, and against the right person in this tournament, that could be a big deal. Lou Williams is decidedly not that guy — he has been a bad defender for most of his career, and Erving had an easy enough time getting by or finishing through bigger, more athletic players than Williams. Erving's reach and athleticism are ridiculous, and he would have no problem getting past Williams.

The only saving grace for Williams is that if he can luck into a stop, he may be able to get rolling and just shoot Erving out of the game entirely with make-it, take-it rules. But with limited dribbles, it's going to be hard for him to get free of the bigger, stronger, more athletic guy, and I think Erving takes this one fairly easily.

The primary difference between these two men? One was remarkably durable, and the other's career was cut short as a result of repeated foot problems. Chet Walker played 76+ games in every single year of his 13-year career, and Toney only made it through eight seasons before his injuries forced him to walk away from the game entirely. One is a Hall of Famer as a result, and the other is merely remembered as one of the great "What if?" players of his generation.

Within that sad story of Toney's, there are examples of how organizations impact the health and happiness of their players. When Toney battled through stress fractures in the mid-1980s, former owner Harold Katz demanded that he return to play at the risk of being suspended otherwise, reportedly made racist insults toward Toney, and Toney believes he was the driving force behind accusations of drug use in the mid-1980s. By the time Toney was able to get a proper evaluation of his injuries, the damage (physically and psychologically) had already been done.

That robbed the Sixers and Toney's teammates of one of the most dynamic scorers of the decade. Who is to say how the rest of the decade turns out if Toney's health doesn't take a turn for the worse? Perhaps they hold onto the core for a little bit longer, perhaps Charles Barkley has a capable running mate through the late 1980s and early 1990s, and perhaps nothing really changes at all because the Sixers were run by an owner who was worried about recouping every last cent, rather than trying to win basketball games. But Toney and the fans who revered him were robbed of that opportunity by a short-sighted group who tried to force him back into action.

Anyway, if you're asking me to handicap this one, I am taking the Boston Strangler. Longevity matters insofar as it allows you to put yourself in the history books, but this isn't a career contest. If you're asking me who I trust to win a one-on-one battle under pressure, give me the guy who wanted, got, and scored the ball in big moments against the very best competition the league had to offer, on a team with several Hall of Famers on it who could have taken those opportunities themselves.

If Toney could convince the likes of Dr. J and Moses Malone to get out of his way, who am I to argue?