We've got another round of one-on-one matchups in the all-time Sixers one-on-one bracket, and today features a trio of beloved Sixers Hall of Famers and one Jimmy Butler, who is matched up with the namesake of the Allen Iverson region.

As a reminder, here's what the Allen Iverson region looks like after being updated to reflect first-round results. 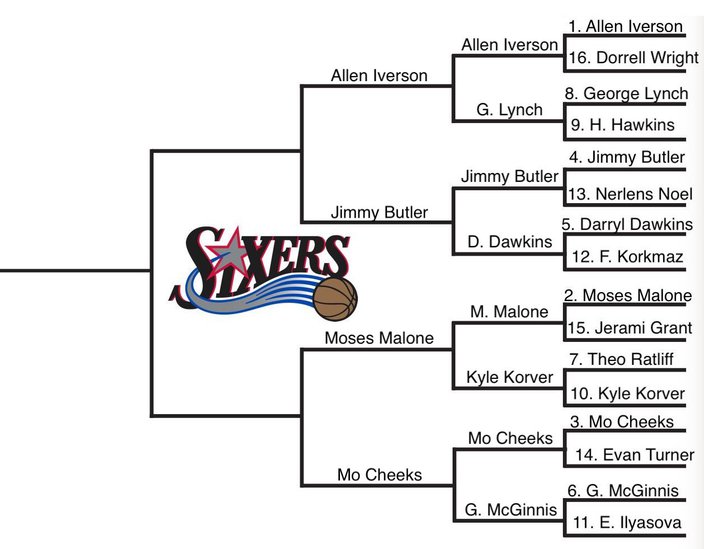 Here's how the Iverson region split in the previous round:

The only eyebrow-raiser for me here is the comfortable Cheeks win over McGinnis. While Cheeks certainly had the better career in Philadelphia, if you were asking me who was better suited to get buckets in a one-on-one battle, it's McGinnis. But the people have spoken.

We move to the matchups in this round, starting with a battle between a beloved star and another who left rather quickly.

To this day, Iverson remains one of the most debated players in recent basketball history. And this matchup is a great litmus test for how people think he would hold up in this era of basketball — or at least how much people like or dislike Mr. Butler, who obviously angered many on his way out the door.

The case for the former MVP and leader of the 2001 Finals team is a pretty obvious one. He has an electric first step, great handles, a level of fearlessness that is probably unrivaled, and without the paint being cramped by spacing, Iverson would have a much better time getting to and finishing at the rim. Even if you want to chide him by calling him a "volume scorer" you have to acknowledge that during the prime of his career he was liable to drop 30, 40, or even 50 points on your head every time he stepped on the floor. What he lacked in versatility, he made up in singular brilliance and force of will.

Of course, Butler is unlike a lot of guys Iverson would have been matched up with in those days. Butler genuinely believes himself to be one of the best players in the league, and he certainly proved capable of finding that gear at times during his lone season in Philadelphia. Would you get first-half Butler or fourth-quarter Butler in this matchup? I would lean toward the latter — he's a man with a sense of the stakes and would not take an opportunity to go head-to-head with Iverson lightly.

The 2001 team was assembled the way it was in part to take defensive responsibility off of Iverson, allowing him to play a freelancing role away from the ball and rest his legs a bit against less capable guards. There is no escape for Iverson here, and Butler's size and strength advantage would make it tough for Iverson to do much if Butler used his handle to just seal Iverson off in the mid-post and shoot 15-foot jumpers over him. Iverson has a quickness advantage to be sure, which might allow him to get a few cheap ones, but Butler would make him fight for every inch otherwise.

I'm not sure I could go so far as to suggest Butler would beat Iverson here, but I think it's a lot closer than you'd expect between the mercenary and the beloved Hall of Famer in this setting. Butler is not going to let Iverson get away with making a bunch of ugly long twos in his grill, and this one might go down to the wire.

It seems impossible that Moses Malone was as good for as long as he was. He entered professional basketball as a dominant teenager in the ABA, and he didn't play his final season until Michael Jordan's first comeback season, a shell of himself at that point but still putting in the work anyway. Between his longevity and his insane peak — three MVP awards and a title between 1978-1983 — his place near the top of any list of basketball greats should be in no doubt.

Because he was such an impossibly good rebounder, which gave him a platform to dominate games even when everything else wasn't working, it's easy to minimize everything else he was able to do during the peak of his career. His MVP season featured preposterous work on the boards, but also touch shots off of the glass, terrific outlet passes, putback slams, and physical dominance of some of the era's best players.

If a big man pulled off something like this today, it would light social media up for the evening.

And truthfully, Malone's most enduring legacy might be his work ethic. His "going to work" mantra has been relayed by many of his teammates from that era, and Charles Barkley has said many times over that Malone is largely responsible for his Hall of Fame career, with the veteran working to get him in shape and prepared to play professional basketball. Insofar as that translates to skill and conditioning, that makes me feel good about his chances in one-on-one games.

Cheeks getting here is sort of a bummer strictly because I just don't think he has a chance physically here, nor did he have the offensive repertoire to put the pressure on Malone in that way. Cheeks was a pass-first guard, and one that Philadelphia needed on a team with plenty of mouths to feed, and a great open-floor player who always made the right reads. Team basketball is just a very different matter than what we are talking about here.