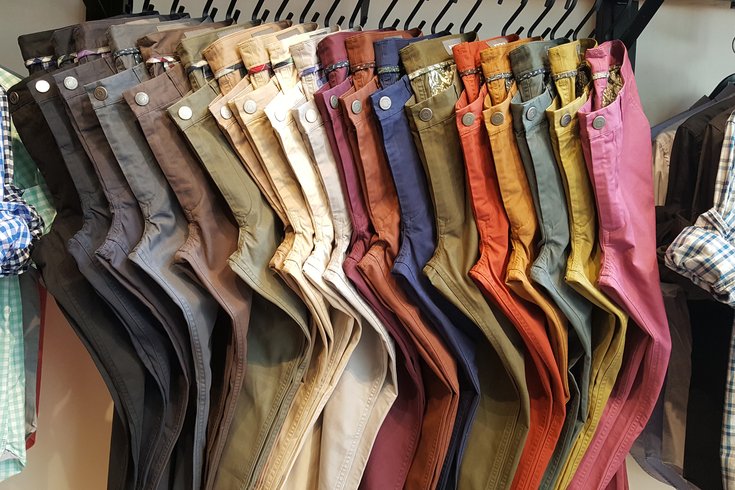 A variety of men's Chino pants, hung on a rack at the Philadelphia location of Bonobos.

Anyone who's taken a midday march down Market Street has seen poor-fitting men's khakis in the wild. They sag from the rumps of office workers wandering back from their coffee breaks — into an office likely full of more oversized tragedy.

"We put [in our pants] what we call the 'Bonobos Signature Curved Waistband.' So if you've ever worn a leather belt over a period of time, that belt takes on a natural curve over time because it’s been catering to your waist for so long. We’ve taken that curve and put it into the waistband of our pants, which ultimately helps fit on the waist and eliminates ‘khaki-diaper-butt,’" Erin Grant, a representative for Bonobos, told PhillyVoice. "So you’re not going to get all that sagging and extra fabric in the back of your pants you typically get with other kinds of brands.”

Bonobos opens its first Philadelphia storefront at 10 a.m. on Friday, Aug. 26, at 1519 Walnut St. — what was formerly Tiramisu. At 2,200 square feet, it's larger than most of the brand's 23 other locations across the country, boasting five dressing rooms and a full assortment of the company's Bonobos.com men's apparel, ranging from collared shirts to Italian suits, belts to ties.

Bonobos was founded in New York City in 2007 by Andy Dunn and Brian Spaly, as a side pants-making project they'd undertaken while attending Stanford Business School. It quickly evolved into an online-only men's shop based around their tailored-thigh Chino pants and grew, by 2011, into a string of what they call "GuideShops" — think: Warby Parker, a showroom in which you try on but don't take home.

At Bonobos, a "guide" explains the GuideShop concept, assists customers individually through the try-on process and carries them through the purchase, before sending them on their way with the promise of right-fitting pants on their doorstep within two business days. The idea, Grant said, is to evolve the retail concept in a market that's increasingly demanding more intimate shopping experiences — and to get them out the door not needing to carry an extra shopping bag.

But it's also a shop with a noticeably more classic look. 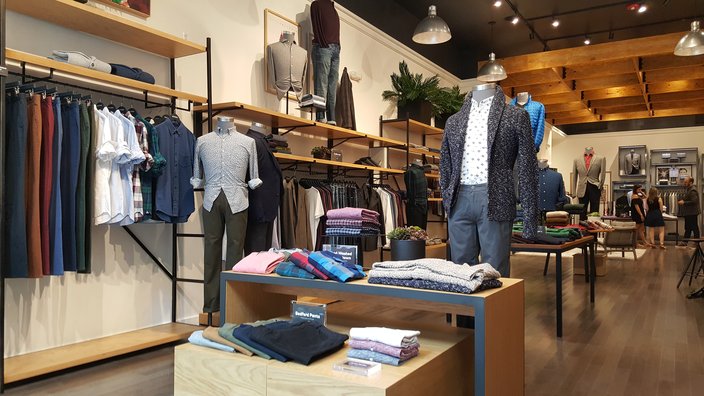 “We’re trend-conscious but not trend-driven.You’re not going to go into a Bonobos shop and have fast-fashion," Grant explained. "An item on a runway or blog one day and then produced and thrown into our stores —we're not a fast-fashion brand, but we are a quality brand who understands what’s going on in the men’s fashion industry. We offer guys a version of what’s going on in the fashion world in a more digestible way."

Prices are fairly digestible by Walnut Street shopping standards, too. Bonobos' go-to Chinos are $88 and available in a surprisingly diverse spectrum of colors; ties are a reasonable $28. Shirts, made with a snug shoulder fit in mind, will set you back between $98 and $128.

The Chinos, for those skeptical, are nearly as tailor-made as the brand advertises — only without the trouble of getting measurements and waiting weeks for your order. The pants are offered in even and odd sizes (28 x 30 to 40 x 34; 29 x 30 to 35 x 34), meaning there are enough width and length combinations that the skinnier and bulky-thighed among us can squeeze in comfortably, and the material around the waist (upon a quick try-on) really does squeeze in a way that complements the rear but doesn't hug it.

In sum: Bonobos — named after the bonobo ape — doesn't offer  anything too adventurous in terms of aesthetic, but goes just far enough that more fashionable folks can jump on board. Because, after all, even the most stylish need a nice pair of khakis.

Bonobos will open its second Philadelphia location, inside the newly opened King of Prussia Mall expansion, next week.