'That was like, my favorite moment ever on Action News.' 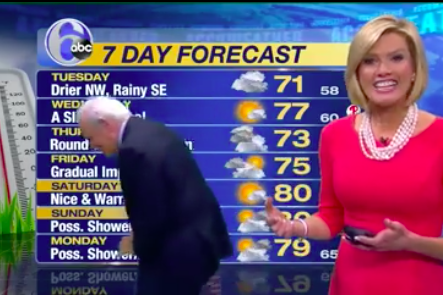 Anything for a co-worker, right?

In a video posted on Tynan's social media accounts, her earring falls out while she's telling viewers what to expect weather-wise on the live 6 p.m. broadcast as the region looks forward to the long Memorial Day weekend.

"I hope I didn't lose that. I really liked that earring," Tynan said as she continued with the forecast.

Moments later, Gardner can be seen hunched over in the background on the hunt while Tynan laughs.

"He's such a team player," Tynan said on air. "That was like, my favorite moment ever on Action News."

It's not the first time Gardner, known for his stoic delivery of the news, has had such an unpredictable moment. It was just a few months ago that Gardner and the 6ABC news team could be heard laughing while Gardner struggled to pronounce "Young Jeezy," the musical guest on "Jimmy Kimmel Live," during a November signoff.

The most recent rare moment comes just a week after Gardner celebrated 40 years anchoring the 6 p.m. and 11 p.m. broadcasts at WPVI-TV. The station aired a tribute video voiced by Tynan highlighting the best moments from his career.

Too bad Monday night's moment didn't make it in time for the cut.

Check out 6ABC's tribute below: