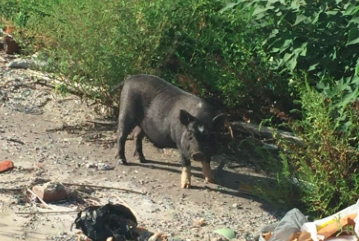 Here's something you don't see every day.

Word of the pig's mysterious appearance first popped up on the Philadelphia subreddit earlier Monday, when local resident Colin Weir posted a photo and an ensuing chase was announced.

Update: ACCT is here, a group of grown adults are having trouble subduing a tiny pig

Several hours later, Weir streamed a live video of the heroic capture on Periscope, complete with what sound like squeals of despair.

We don't have any idea what joyful squeals are supposed to sound like, so this pig could have simply been startled and freaked out after a lengthy pursuit, but otherwise happy to be in good hands.

Upon further investigation, Weir determined that the pig had likely been camping out in an empty lot at 24th and Washington Avenue for quite some time.

Pig wrap-up: Dude was clearly living in that lot for a while, had quite a little burrow back there