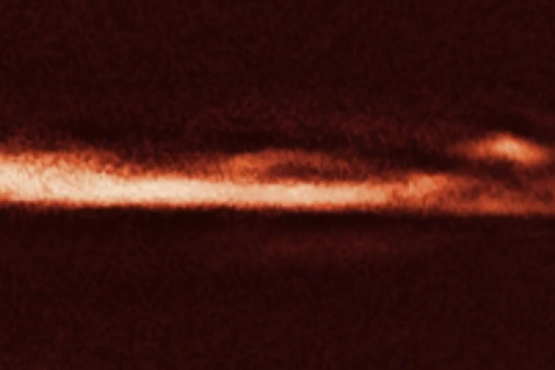 Scientists monitoring a young star 32 light-years away from Earth have observed an unexplained series of ripples in the midst of their search for signs of forming planets.

The European Southern Observatory team has been watching the red dwarf star, known as AU Microscopii, for evidence of lumps and bumps that might represent planets taking shape out of a surrounding disk of dust, according to Scientific American.

Using the Very Large Telescope in Chile, the ESO team spotted a phenomenon they've never seen before: zooming wavelike ripples moving at speeds up to 24,855 mph, fast enough for some of them to escape the star's gravitational pull.

Scientists are attempting to come up with an answer for the ripples, and based on signs of planetary precursors found in 2007, one theory is that the ripples are caused by solar flares interacting with the coalescing dust.

"One of these flares could perhaps have triggered something on one of the planets—if there are planets—like a violent stripping of material which could now be propagating through the disk, propelled by the flare's force," said Glenn Schneider, co-author of a new study in the journal Nature, in a statement on the findings.

According to the statement, the team plans to continue observing the AU Mic system using multiple facilities, which may enable them to understand what is happening from a composite of perspectives.

Watch the video below to learn more about the findings.