If the New Jersey governor can win just one of 10 rounds, the occupiers will reportedly leave the Malheur National Wildlife Refuge 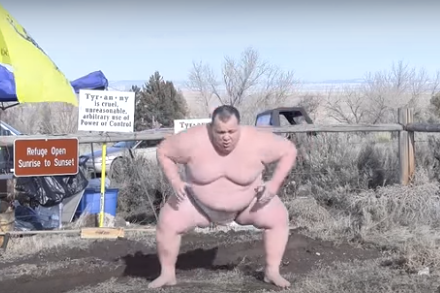 Just when there seemed to be no end in sight for the armed occupation of the Malheur National Wildlife Refuge, Oregon militant and champion sumo wrestler Kelly Gneiting offered an out that rides on the brawn of New Jersey Gov. Chris Christie.

In a nearly 3-minute-long YouTube video, Gneiting, dressed in a traditional sumo loincloth called a mawashi and calling Christie “little brother,” challenges the governor to battle him in 10 sumo rounds.

If Christie wins just one round, Gneiting says the occupiers will walk away.

Do you accept the challenge, Governor?

Before making a decision, Christie should know this – Gneiting has all the sumo wrestling gear (really it is just the thong-like mawashi) with him because he is an actual champion sumo wrestler.

A profile on Gneiting, published in the Orange County Register in 2014, describes the Oregon militia member as 6 feet tall and weighing 430 pounds, and, at the time, a five-time U.S. champion sumo. About the popularity of his sport, Gneiting is realistic:

“Every sport starts somewhere before it’s accepted. Maybe sumo will be big one day, like it is in Japan, where sumo wrestlers are like rock stars.”

But most interesting – and potentially notable for the New Jersey governor as he weighs his decision – is that Gneiting has run three marathons, and in 2011 set the Guinness World Record as the heaviest man to complete a marathon.

In a piece he wrote in May posted on the Independent American Party's website, Gneiting also says he is a former U.S. Marine.