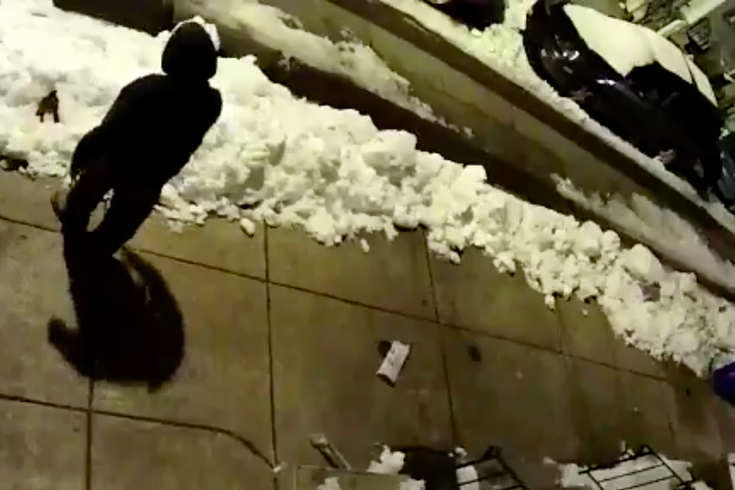 On Sunday afternoon, a gentleman by the name of Brian Johnson sent a question to Philadelphia Police via Twitter.

“What do I do with video evidence of a man pooping on my sidewalk? #curbyourself” it read.

This is a tricky question, and one which the professional wrestler from South Philadelphia didn’t follow up on with a call to the 3rd Police District.

Instead, an hour later, he posted the 45-second video to the social-media site so everyone could bask in its depraved glory.

If you’re so inclined, you can watch it in the embedded tweet at the bottom of this story.

If you’re not so inclined, here’s a play-by-play:

A security camera outside his home shoots downward from an elevated position. You can see a snowbank, some moderate trash-day litter and a gentleman in black squatting atop the snow.

About 16 seconds in, the unidentified defiler stands, pulls his pants up and tries to kick snow and ice over his excrement. When that fails, he attempted to conceal the doodie by picking up snow and placing it over top, but the snow was so frozen that that didn’t work, either.

"Lo and behold, there was a man s---ting on my sidewalk, yelling at his s--- or some mystical creature outside." – Brian Johnson

This would be acceptable behavior if the man was a cat and the snowbank outside Johnson’s home was a litter box. Alas, neither was true.

Just before the video ends, he appears to step in his own poo. We do not see what happens next as the coverage ended abruptly.

I caught up with Johnson on the phone Tuesday morning to get the full story, though.

The tale starts around 10:30 p.m. Thursday when Johnson and his girlfriend Stacy were walking home from watching the NCAA tournament games.

As they approached their home near Fifth and Watkins streets, "We saw some drunk guy kicking snow. We had no idea who he was and didn't pay it much mind. We walked into our house right behind him in that video."

Fast forward to Friday night, and Johnson got a text from Stacy. She typed that "I think someone took a s--- in the snow" and asked him to look at her Snapchat because she thought it might've been "explosive diarrhea."

The next day, the couple noticed the excrement hadn't gone anywhere, and that "nobody tried to clean it up," so they tapped into their security video and rewound to Thursday night.

"Lo and behold, there was a man s---ting on my sidewalk, yelling at his s--- or some mystical creature outside. It was all mumbles, some F words and other curses," Johnson recalled of what they heard when passing by the man on Thursday night.

As for what happened after the video cuts off, Johnson said the man "just kind of walks back and forth and then leaves." 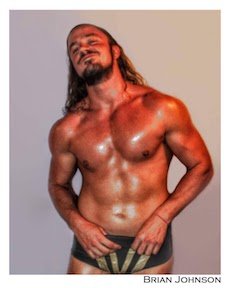 Brian Johnson, a professional wrestler from South Philadelphia, sent police video of someone pooping on his sidewalk.

When asked what kind of move he'd perform on the defiler if he got him in the wrestling ring, the 27-year-old Johnson just chuckled.

He sent the video to police because they're active on social media, he said, and he particularly appreciates their "No Savesies" memes, which resonates in a part of South Philly where Johnson has taken it upon himself to chuck orange cones out of spots personally.

The obvious answer to Johnson’s tweeted question is to head to the local police district, present said evidence and file a report.

When I presented his question to Officer Tanya Little of the police department’s public affairs office, she said the offender – if identified – could get a citation for indecent exposure or urinating on the highway.

She didn’t think there was a defecating on the highway charge, and would have to consult with attorneys to determine whether video evidence would be enough to prompt the citation.

As for Johnson, he's taking the whole thing with a grain of proverbial salt.

"Everyone's laughing about it and at first, I was thinking, 'NO! Someone pooped on my sidewalk!" he said. "Now I just laugh about it, too. Whatever. He probably had nowhere else he could go."

In case you're wondering, the poop is gone.