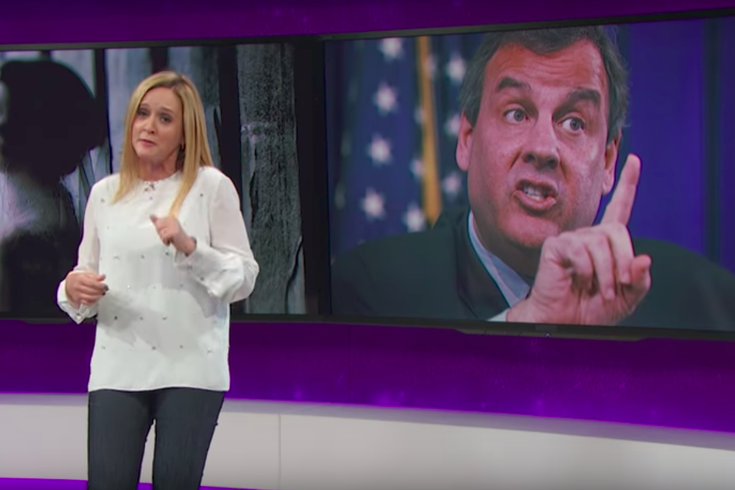 Samantha Bee mocked Chris Christie on her show for vetoing a bill that would ban child marriage.

Samantha Bee mocked the most unpopular governor in the United States for vetoing a bill that would have banned marriage of minors in the state.

In May, Chris Christie issued a conditional veto of the proposed ban, saying that while he agreed protecting the well-being of minors was "vital," an outright ban was too strict and may encroach on religious customs.

Currently, New Jersey law allows 16- and 17-year-olds to get married with parental consent, and anyone younger must get a family court judge's permission.

Christie said the proposed law should be amended so that a judge's order must be required for 16- and 17-year-olds, with a ban on marriages for those younger than 16.

"Finally, it is disingenuous to hold that a 16 year old (sic) may never consent to marriage, although New Jersey law permits the very same 16 year old (sic) to consent to sex or obtain an abortion without so much as parental knowledge, let alone consent," Christie wrote in his veto.

On her TBS show "Full Frontal" Wednesday night, Bee dedicated an entire segment to child marriage, which she noted is allowed in some form in all 50 states.

Talking about the veto, Bee quipped that the bill hit a roadblock "from a man synonymous with roadblocks," a reference to the Bridgegate scandal.

Bee used a clip of columnist Christine Flowers, who recently was lambasted by many for her controversial opinion on Bill Cosby's sexual assault trial, explaining Christie's reasoning.

"Geez, you'd think Gov. Christie would be more sympathetic to those finding themselves trapped in a cruel, coercive relationship with an older man," Bee joked, referencing his relationship with President Donald Trump.

You can watch the entire segment below, but the New Jersey part starts around 3:10.