WATCH: Suspect sought in robbery at gunpoint on Germantown Ave. 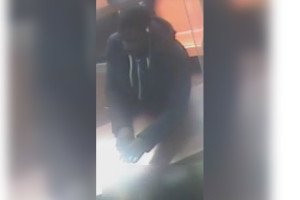 The Philadelphia Police are seeking help to identify this man, who police said, they believe robbed a teenager at gunpoint in the city's Germantown neighborhood.

The Philadelphia Police are seeking help from the public after a 17-year-old boy told police he was robbed at gunpoint on Oct. 29 while walking along Germantown Ave.

According to police, the incident occurred at about 7:38 p.m., when the teenaged victim was walking on Germantown Avenue near Hortter Street when he was approached by an unknown black male who asked for a cigarette.

As they spoke, police said, the wanted individual pointed a handgun at the teen and demanded everything he had.

According to police, the suspect stole about $48 and struck the teen in the face with his handgun. He then told the victim to run or he would get shot.

As he ran away, police said, the victim watched the suspect enter a small white vehicle and head north on Germantown Avenue then east on Springer Street.

Surveillance cameras at a nearby business caught video of the suspected gunman and his vehicle that day. Watch it here:

There were no injuries reported during this incident, police said.

Law enforcement officials describe the wanted individual as a 22-year-old, six-foot-tall male with a thin build and "nappy beard."

At the time of the incident, police said, the suspect was wearing a blue hooded sweatshirt, black pants, and was armed with a handgun.

Police said that the gunman fled the area in a small white vehicle with a sunroof and damage to the right front fender.