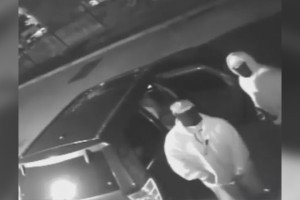 Police are seeking the public's assistance in identifying the men responsible for a string of burglaries that occurred throughout the city, that occurred between March and September.

Police are seeking the public's assistance in identifying the suspects responsible for a string of burglaries in the city since March.
In a statement released along with surveillance video of several of the crimes, the police said the same individuals are likely responsible for at least five burglaries between March 6 and September 13 at locations throughout the city.
According to law enforcement officials, three or four males used at least two, possibly three, different vehicles and have broken into ATMs and four pharmacies, where they have taken cash, drugs, and in one case, a ceramic Roberto Clemente baseball card and coin worth about $11,000.
In at least one incident, the men can be seen on video using power tools to break into a safe holding pharmaceutical drugs, sending sparks flying throughout the pharmacy.
The video released Wednesday, includes footage taken from each of the incidents.
Watch it here:
Police said the first incident occurred on March 25, at about midnight after two men in a white pickup truck, with a sun roof, pulled into the parking lot of Philly Pharmacy at 9475 Roosevelt Boulevard, hopped out of the vehicle and cut the lock on the front door.
The individuals then leave, but about three hours later, at 3 a.m., a silver SUV with tinted windows arrives in the front of the pharmacy, and three male suspects enter the building to steal medications while a fourth unknown person waits in the vehicle, police said. The suspects then fled.
The second burglary occurred at about 4:15 a.m that same night, when a silver SUV pulled to the rear of Academy Pharmacy at 10101 Academy Road and three men exited the vehicle, pried open the door and entered the business.
Police said the suspects stole medications from the shelves throughout the pharmacy before returning to the vehicle and fleeing in an unknown direction. The men also took a surveillance recorder from inside that business, police said.
The same men, according to police, are wanted in a third incident that occurred on June 9 at about 2:20 a.m., when two suspects broke into a Wells Fargo ATM machine at 7598 Haverford Avenue.
Police said that in this case, the suspects removed an undetermined amount of money and then fled in a waiting vehicle that was driven by a third person.
Law enforcement officials note that this incident was similar to a burglary that occurred on May 10, at a Citizens Bank ATM machine at 2910 South 70th Street and police believe the suspects are the same.
A similar incident occurred on May 10, at about 5 a.m., police said, when suspects attempted to gain access to a Citizens Bank ATM machine at 2910 South 70th St. but was unsuccessful. According to police, two days later an employee of the bank found the machine had been tampered with, but nothing was taken.
The same suspects are believed, by police, to be involved in a burglary that was discovered on Aug. 20 at about 8:15 a.m., when the owner of Amigo Pharmacy at 3027 Kensington Avenue found the rear door of the business had been forced in, police said.
In that crime, police said, the burglars escaped with drugs, cash and a valuable ceramic Roberto Clemente baseball card and coin worth about $11,000.
Police described the suspects in this crime as two men. One man was wearing a Phillies cap, a dark face mask and gloves at the time of the crime while the other was wearing a black face mask, baseball cap, wind breaker jacket and camouflage-colored army pants, police said. They fled in a late model Jeep Cherokee with a factory sunroof, police said.
Finally, police said, the most recent crime occurred on Sept. 14 at 3:50 a.m. when three men gained entry to the Broad and Grange Pharmacy at 5751 North Broad St. by forcing open a rear door.
In this incident, police said, the burglars came prepared with power tools in the back of a dar-colored, newer model Jeep Cherokee SRT8 edition. In surveillance video, the suspects can be seen using crowbars and power saws to gain access to the rear doors and cut the wire to the alarm system. Two suspects appear to be removing specific medications from storage units and a shelving area while the third suspect remains with the vehicle to act as a lookout.
Sparks fly through the business, as seen in the video, when the suspects using a power saw in an attempt to gain access, police said.
According to law enforcement officials, the suspects in the store stayed in contact with the lookout via walkie talkies and, at one point in the footage, the suspects appear to be alerted by the lookout to stop.
The suspects then fled to the waiting vehicle, which was last seen east on Grange Avenue, police said.
In that crime, police said, the burglars escaped with numerous bottles of prescription narcotics.
According to police, the race of the three men is unknown. The first suspect wore a dark hooded sweatshirt, dark mask, camouflage pants, dark boots, and gloves. The second suspect wore a dark mask, dark baseball cap with “P” Phillies logo, dark jacket, dark pants, boots, and gloves. The third suspect wore all dark clothing, and a mask.
Police are asking anyone who may have information in these crimes to call 911 immediately. If you'd like to submit a tip anonymously, you can contact police at (215) 686-8477 or text a tip to 773847.
Also, tips can be sent anonymously to police here.