A six-year issue prompts heated words and long-awaited votes, but it may not be over yet 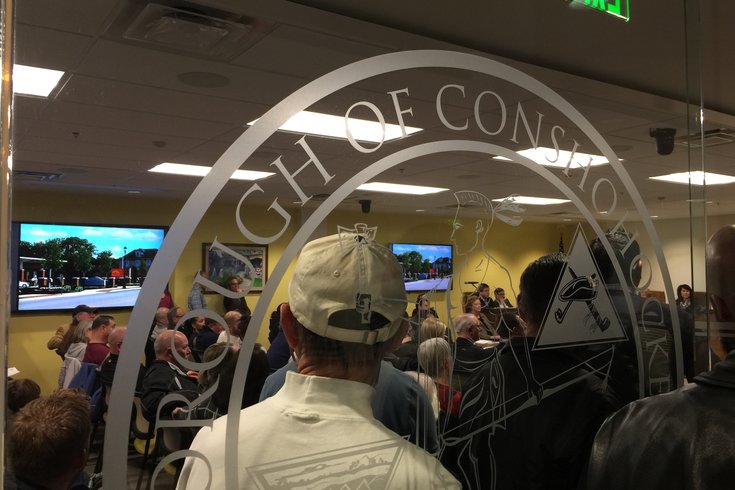 It was standing-room-only inside the Conshohocken Borough Council chambers for a hearing about a proposed Wawa superstore on Wednesday, November 15, 2017.

The abandoned car dealership at 11th and Fayette streets in Conshohocken can best be described as an eyesore in a neighborhood that blends commercial and residential properties rather seamlessly.

On that, everybody who crammed inside Borough Council chambers and spilled out to the lobby outside could agree, but that’s where their ideological harmony ceased.

For the past six years, this square-mile municipality of just over 8,000 residents has been mired in disagreement over whether that E.F. Moore dealership property should be transformed into a Wawa superstore with nearly 20 gas pumps.

The vocal side – which made its stance known through mobile protest signs, leaflets and whispers of “back room deals” – firmly opposed the development for myriad reasons, ranging from traffic and safety concerns to the smell of gasoline ruining outdoor-dining opportunities a block or two away.

They shared those and other criticisms during a heated Wednesday night meeting at Borough Hall, just seven blocks away from the Wawa site, as the council considered a request to rezone the property to make way for the convenience store.

By one councilwoman’s pre-vote estimate, about 24 of 28 residents who aired their grievances during a 50-minute, public-comment portion of the two-hour meeting fell into that camp.

The other four – including one gamey gentleman who told at least two people to “kiss my ass” as he walked out of the room after speaking – represented the quiet side.

On this night, thanks to a 4-3 vote by the council, the quiet side won.

That doesn’t mean that a legal battle that’s reportedly seen the borough already drop an estimated quarter-million dollars is over. The opposition doesn’t lack for cash, and can appeal.

All it means is the 29th public meeting related to this saga – here’s a noteworthy clip from the 28th – offered a widely beloved corporation and big-money developers a long-awaited victory.

In 2011, a document called “Conshohocken Revitalization Plan Update: The Community Revisited” set forth a vision for the borough’s future.

Whittled down to its basics, the message therein was about protecting the small-town feel of the Montgomery County borough, a concern raised several times during Wednesday’s meeting.

If you arrived just in time for the 7 p.m. meeting, you couldn’t get inside chambers already filled to standing-room-only capacity.

More than a dozen people angled to hear the proceedings on the other side of glass walls; some held “No Wawa HERE!” signs. 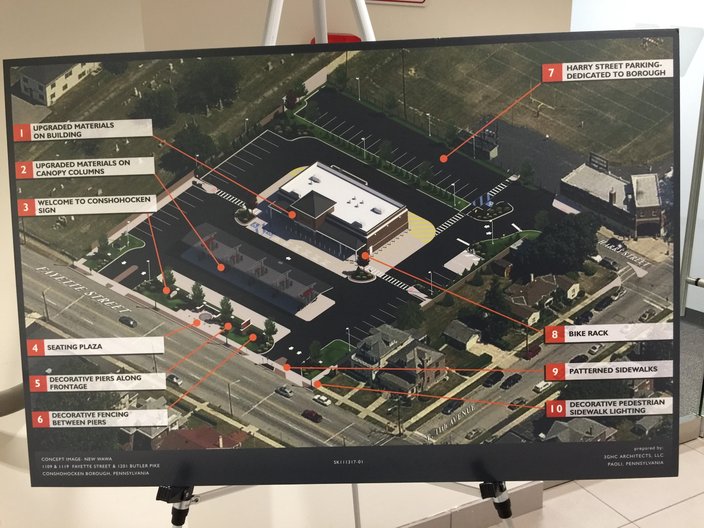 A rendering of the proposed Wawa super store on Fayette Street at 11th Avenue in Conshohocken was on display at the borough council meeting.

After regular-meeting business was conducted, attention shifted to the matter that drew the vast majority of people.

Borough business owners talked about the negative impact a Wawa superstore would have on their bottom lines, not to mention traffic and safety concerns that would ensue if the development proceeded.

They spoke about a big-box slippery slope that could accompany a pro-Wawa vote.

“Maybe Wawa sells magic non-smelling gas,” said a restaurateur concerned with the impact on customers dining outside his eatery two blocks away.

A long-time resident took the mic and said the location is just one minute and 34 seconds from another Wawa location on Fayette Street.

Another was worried about the potential for car accidents as vehicles come in and out of the proposed store.

One resident said she’d move out “and I know others will, too” if the Wawa comes to town.

“The ‘say no to Wawa’ signs should actually say ‘we’ve said no to Wawa.' Please show respect for your citizens, your offices and yourselves and make this a unanimous vote against Wawa,” said Chuck Hoffman, who said his backyard faces the property. “At night on the patio, we’re going to be looking at Wawa.” 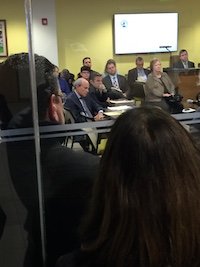 An attorney and representative for the Wawa super-site developer sit quietly amid a heated council session in Conshohocken.

Hoffman was not alone in pointing out that Wawa should have given up when the community came out against the development at another heated meeting in 2013.

“They’ve had loss after loss after loss and they’re just trying to push a matter that the community doesn’t want,” said Luciano Patruno, an attorney and resident. “Legally, they have no basis for this. It’s spot zoning.”

Prior to the meeting, the Conshohocken Revitalization Alliance had cited polls showing that 35 percent of respondents opposed rezoning the property to allow for the Wawa development with 35 percent supporting it.

While the anti-crowd held the floor throughout Wednesday's session, a pro-Wawa resident spoke about the positives. That it would bring jobs. That it’s folly to whine about traffic if residents weren’t opposed to a hotel development across town.

“(Council should) not be bullied by this community one way or another,” concluded the man, sporting a maroon Montgomery County work T-shirt, to laughs and boos that prompted him to say “kiss my ass, old man” as he walked out of the room.

That didn’t go over all that well with others who chided him for classlessness.

“Kiss my ass, too,” he said before leaving the building before public comment had ended.

After the public spoke, Weiss took the mic and noted that it would be a “walkable Wawa” which fits community standards, adding that the landscaping outside would be the best on the main Conshohocken drag.

Several councilmembers took the opportunity to explain where they stood prior to the roll call.

James “Ike” Griffin dismissed it outright, saying he was against it before and he still is.

Jane Flanagan worried that council had been put in the crossfire between two monied sides and that “some residents will be disappointed no matter what we vote for.”

“This is a challenging legal issue that will continue one way or another.” – Conshohocken Councilwoman Karen Tutino

Karen Tutino said what she’s gauged of the public sentiment would factor into her vote, as does the prospects of “criminal mischief, accidents, robberies and noise complaints” often attributed to 24/7 businesses.

“This is a challenging legal issue that will continue one way or another” after the vote, she said.

Tina Sokolowski spoke about facing “many sleepless nights” reading messages from citizens both concerned about and supportive of the proposed project. She spoke of having her “character attacked” by a business owner.

“Nothing is easy about this decision,” she said.

Wrapping up council’s comments was Robert Stokley who spoke about moving from Kensington to Conshohocken some 40 years ago because “I wanted a new life” outside of a Philadelphia neighborhood that was starting to suffer from factory closures.

He spoke about storefronts being boarded-up upon his arrival and impact fees that have helped revitalize the area.

“You can’t build a town without development,” he said, much to the chagrin of attendees who scoffed at him. “Youse all have your opinions but there are a lot of other opinions in this town.”

Chiding the “100, 150 people” in attendance, he said just three people asked him about the Wawa development outside of this bubble. 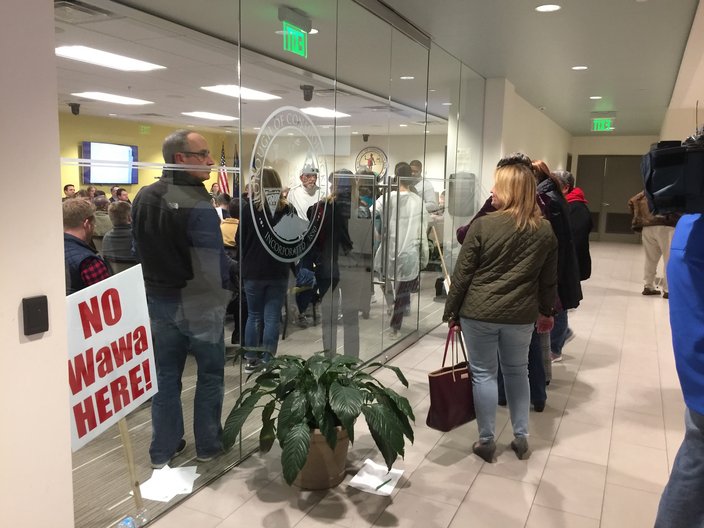 Much of the crowd cleared out after Conshohocken Borough Council approved a proposed Wawa super store by a 4-3 vote on Wednesday, November 15, 2017.

Then, it was time for the vote on rezoning the property.

With that, residents started booing and yelling things like “rigged,” “horrible” and “shame,” drowning out Griffin and Tutino’s no votes that gave the controversial development a 4-3 green light.

“As a resident,” Patruno said in the hallway, “I think it’s a disgrace what happened here.”