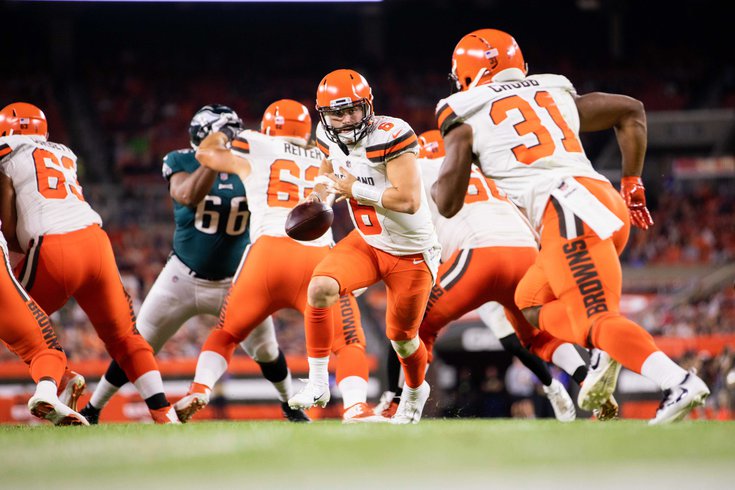 Nick Chubb and the Browns are better than the Eagles.

For the gambling enthusiasts, here are my Week 11 NFL picks. To note, the team logos indicate who I think will win the game, not cover the spread. At the end of the picks, I'll note a few teams that I like based on the spread. All the below spreads are courtesy of the consensus Week 11 odds at TheLines.com.

Cardinals at Seahawks (-3.5): Hey we finally have a Thursday night matchup worth watching! 🎉

The Seahawks' injury report is a mile long, and it's especially troublesome at cornerback, as starters Shaquill Griffin and Quinton Dunbar will both be out. That's not ideal against a WR trio consisting of DeAndre Hopkins, Larry Fitzgerald, and Christian Kirk. Give me the Cardinals to win it, and I get 3.5 points, too? Cool, I'll take them.

Falcons at Saints (-5): As we noted in the hierarchy this week, the Saints have an easy schedule during the timeframe that Drew Brees is expected to be out:

They'll probably be fine, but I wouldn't touch any game that involves the Falcons on one side and Jameis Winston on the other. That's too much unpredictability for me.

Something has to give. Give me the non-NFC East option.

Steelers (-10) at Jaguars: Mike Tomlin had this to say about "trap games," via Brooke Taylor of ESPN:

"We are not a Big Ten team playing a MAC opponent this week," Tomlin said Tuesday. "Every time we step into a stadium, we're playing professionals, players and coaches. We've got a ridiculous level of respect for that. Write your story, follow your storylines about trap games and things of that nature. We understand what we're going into in Jacksonville, that that's a group that's trying to kick our butt. A professional group, capable group, and we're preparing with that understanding."

I mean, I'd take most MAC teams over Penn State right about now.

But obviously, if you still have the Steelers available in your survival pool, this is a good week to use them.

Titans at Ravens (-6.5): With Ronnie Stanley done for the season, and Marshall Yanda having retired this past offseason, it's pretty clear that the Ravens' potent attack of 2019 just isn't the same in 2020, and I don't think people have come around on that reality yet. I don't love the Titans either, but this is the team that was able to figure out the Ravens' attack in the playoffs last year. We'll take the Ravens to win, but it's hard to turn down 6.5 points.

Patri*ts (-2) at Texans: Each year there are always a few teams that made the playoffs the year before that don't return the next season. This year in the AFC, the Patri*ts' cheating-fueled playoff run is in danger, and the Texans' reign atop the trash AFC South is over. Neither team will be missed.

Dolphins (-3) at Broncos: Is nobody paying attention to the Dolphins? They're really good! I'll keep taking advantage of these super tasty spreads until the rest of the football world realizes that Miami is legit.

Jets at Chargers (-8.5): You're a bolder man than me if you trust any Chargers team in a survivor pool.

Packers at Colts (-2.5): The Colts have become the team this year that I just can't figure out. Some weeks they're good, some weeks they're not. I don't often like picking games simply on QB vs. QB, but, I mean...

What am I missing? Are the Packers not better than the Colts? Why are the Packers 2.5-point underdogs, and why am I taking them, knowing that there's something weird about that line and I'm being suckered in?

Cowboys at Vikings (-7.5): Because I already burned the Steelers in my survivor pool, the next best option is the suddenly hot Vikings against this trash Cowboys team.

Andy Dalton is back (which is better than trotting out guys like Garrett Gilbert and Ben DiNucci), and the Cowboys are coming off their bye, while the Vikings will be playing on a short week after beating the Bears in Chicago Monday night. So that's mildly concerning. Ultimately, it very likely won't matter. Dalvin Cook and the Vikings should be able to run it all over this soft Dallas defense.

Chiefs (-7.5) at Raiders: The Raiders didn't just beat the Chiefs earlier this season. They kinda took it to them, hitting on several big plays down the field, and 40-burgering them. Vegas has some legitimately impressive wins this season, as they've beaten the Saints, the Chiefs on the road, and the Browns on the road. I won't be so bold as to pick against the best team in the NFL in the Chiefs, but if this line gets above 8, I'd be interested in taking the points.

Rams at Buccaneers (-4): I believe the loss of LT Andrew Whitworth is going to be a big problem for the Rams, and it starts against a good Bucs pass rush on Monday night.