What they're saying: Who's to blame for this Eagles mess — Wentz, Pederson or Roseman?

And, perhaps more importantly, can they fix it? 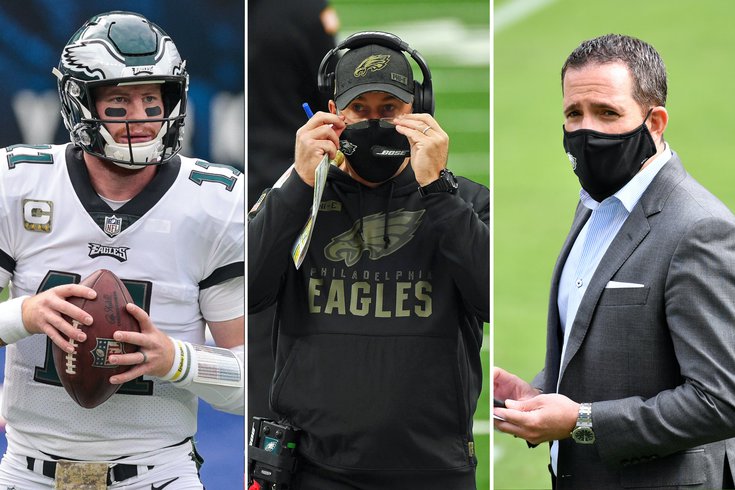 The Eagles stink. That was my lede before I accidentally hit the "back" button and lost nearly my entire story. It was followed by a bunch more words about why they stink and who is to blame, as that will be the theme of today's What They're Saying.

Once I lost my story, I had a simple decision to make: rewrite it as best I could from my memory, or just skip the intro altogether. I chose the latter...

There were a bunch more words here. I'm furious. It was good stuff too.

In short, Cody Benjamin of CBS Sports believes you can't blame one particular person, even if that is our natural instinct. This has been a group effort — you don't get this bad from just one poor performance — and Carson Wentz, Doug Pederson and Howie Roseman all need to share the blame for a 2020 that has left a lot of fans questioning whether it's time to simply blow this whole thing up, just a few short years after that same trio delivered the city its first Super Bowl title.

The short answer: This is a total team effort. The Eagles, despite your fleeting memories of their magical 2017 title run, have been just clutch enough to hover above mediocrity for two and a half years running. Since Doug Pederson and Nick Foles hoisted the Lombardi Trophy and rewrote Philly sports history, the Birds have gone 22-20-1, including the playoffs. That doesn't absolve the 2020 Eagles of their shortcomings, but it speaks to a greater issue: This team's warning signs have been pulsing for a while.

We'll be hearing a bit more from Cody before this post is over, but first, let's dive a bit deeper into each of the Eagles three leaders — Wentz, Roseman and Pederson — to see if one is more culpable than the others.

This was probably my best intro of the bunch — and it was a two-parter at that! — but again, you'll have to use your imagination here. Essentially, a usually even-keeled Tim McManus is upset that Pederson seems to be getting the lion's share of the blame when it should be Wentz.

There is a phenomenon happening right now in Philadelphia, where observers watch Eagles quarterback Carson Wentz fail to execute on a sizable number of plays each game, groan in recognition of the damage those misfires are causing in real time, and then spend the rest of the week convincing themselves that what they witnessed was the result of outside forces, usually of the coaching variety.

Wentz, the No. 2 overall pick in 2016, is in his fifth season. He is making an average of $32 million a year. He is dramatically underperforming in 2020, and the Eagles' 3-5-1 record is largely a reflection of that, given how closely tied a team's fate is to its quarterback play in the NFL.

Wentz's regression is on him. The excuse-making needs to stop.  [espn.com]

Just imagine what would've happened if Trey Burton overthrew Nick Foles on the Philly Special? Suddenly, Pederson doesn't look like a genius. In fact, he'd look like quite the opposite. We're not saying that Pederson is blameless — far from it — but that type of thinking is certainly worth applying when watching the Eagles going forward.

But a race car is only as good as its engine. Wentz entered Week 10 ranked 32nd in completion percentage (58.4), first in turnovers (16) and 30th in yards per attempt (6.2). He has the highest off-target percentage of any QB in the league at 23.6%, according to ESPN Stats & Information research. He often doesn't click into gear until late -- a major reason for the team's slow starts. He has thrown six touchdowns to 10 interceptions over the first three quarters this season, as opposed to six TDs -- or half of his touchdowns -- and two interceptions in the fourth quarter.

It's impossible to look good as a playcaller and decision-maker when your QB is that inefficient.  [espn.com]

It's also worth pointing out that Wentz may have more of a say in the play-calling than you think. And not all of the bad calls are necessarily Pederson's fault.

To Cody Benjamin's above point, there's plenty of blame to go around.

It's time to talk about Doug.

So why the #$%& aren't they running the ball more?

HEY, DOUG ... READ THIS: After nine games, the Eagles are on pace to become only the second team in the last 64 years to average at least 5.1 yards per carry but run the ball 24 times or fewer per game. The other was the 1990 Lions.  [nbcsports.com]

Over at The Athletic, Michael Lombardi, who famous called out Doug Pederson before his team went on to win the Super Bowl but is looking less and less foolish with each passing season, listed the Eagles as one of his teams who made the worst offseason decisions in 2020.

It appears we've reach the third member of the team's trinity of blame: Howie Roseman.

Philadelphia: The Eagles selected quarterback Jalen Hurts in the second round and claimed that they are in the business of developing quarterbacks while failing to address other needs. With that statement after the draft by Vice President Howie Roseman, the Eagles needed to be proven correct with their team evaluation. So far, Roseman and the Eagles have proven to be way off on their planning for the 2020 season — and it’s not COVID-related. Nothing they have done has improved their football team. From passing on Justin Jefferson to selecting Jalen Reagor, the Eagles’ planning has been dreadful. The Eagles’ front office thought Jefferson was only a slot receiver and Reagor would provide big-play talent. Their willingness to rely on aging players who they know will get injured is somewhat laughable. Why is anyone surprised when an oft-injured older player re-injures himself? The Eagles counted on those players and even though they might win the NFC East, they are not a playoff-caliber team.  [theathletic.com]

The one that got away

Speaking of Howie's 2020 misfires, Brandon Gowton of Bleeding Green Nation wrote about how in the early going it appears his decision to pass on Justin Jefferson and draft Jalen Reagor instead might've been a mistake.

Just look at some of these stats BLG pulled for Jefferson, who ranks first overall in Football Outsiders' DVOA, second in PFF's grading, and of whom he said it isn't a stretch to call him "already one of the NFL’s best receivers."

Jefferson’s 54 targets have resulted in:

Jefferson has clearly debunked the myth that he’s merely a slot receiver (43rd in slot percentage) or simply just a product of getting to play with Joe Burrow in LSU’s high-powered offense.

Reagor’s numbers obviously don’t compare, in part because he missed five games due to injury. But availability is part of the equation....

Let’s make this clear: this post isn’t suggesting Reagor is a total bust and there’s no hope for him. Reagor did some nice things in training camp and he’s flashed some big play ability. He’s only 21 years old and he seems like a hard-working kid who genuinely wants to improve. Perhaps Reagor would even be posting bigger numbers than he is right now if he wasn’t saddled with (yet another) struggling quarterback.

But it’s also not a foregone conclusion that Reagor will actually be good. I mean, are we really just going to assume the GM who drafted J.J. Arcega-Whiteside over D.K. Metcalf definitely got this pick right? It’s possible Reagor could be the latest example of Roseman’s poor track record when it comes to drafting receivers.  [bleedinggreennation.com]

Who can save the Eagles?

And, finally, we return to Cody Benjamin's story from the top. Specifically the part where he talks about how the Eagles can fix this, or at least try to, moving forward...

How on Earth, then, do the Eagles march forward? Well, for one, they'd better do it with more grit than any of Pederson's previous underdogs, because even if they pull off an upset or two over the next five weeks, they'll barely be clawing at .500 ahead of their last two divisional games. It's one thing to play the "no one believes in us" card for three straight years; it's another to play it for a fourth year as the losses pile up, and then expect everyone to enter the playoffs with their heads high.