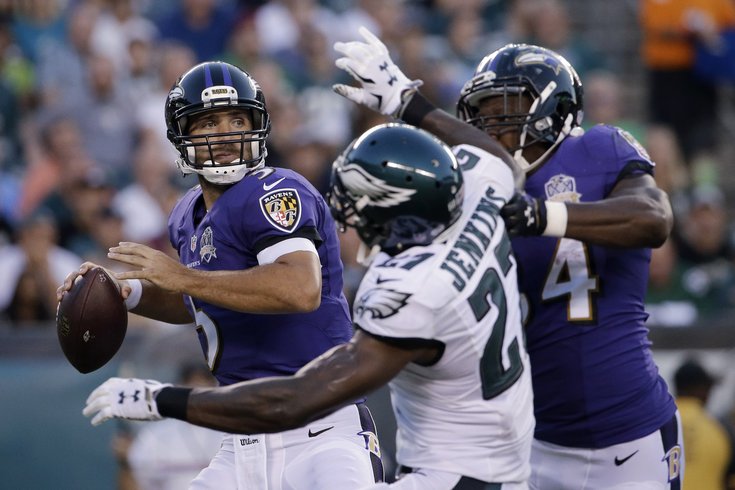 The Ravens and Eagles are familiar preseason opponents, which means nothing, but I have to write something here.

For the gambling degenerates, here are my Week 15 NFL picks. To note, the helmets indicate who I think will win the game, not cover the spread. At the end of the picks, I'll note a few teams that I like based on the spread.

Rams at Seahawks (-16): I get that the Rams are an absolute mess, but a 16-point spread because the Rams' awful head coach got fired? That feels a little drastic. Still, I wouldn't touch this game with a 10-foot pole.

Dolphins (-2.5) at Jets: A week ago, the Jets showed a little heart (I guess) when they came back to beat the woeful 49ers on the road. That may be their feel-good win before they pack it in for the season.

Packers (-5.5) at Bears: Matt Barkley has been surprisingly competent at quarterback for the Bears since he took over as their starter three weeks ago. There are people who are even saying the Bears may have found their starting quarterback going forward.

Can Matt Barkley be the long-term answer at QB for the Bears?https://t.co/pryFY2vlSH pic.twitter.com/2UBsI816tL

I triple dog dare you to think of Barkley as your long-term answer, Chicago.

Eagles at Ravens (-6): You can put me down for whoever the Eagles play the rest of the season, and that may even include a Mark Sanchez-led Dallas Cowboys team with nothing to play for Week 17.

Titans at Chiefs (-5.5): The Chiefs are legitimate Super Bowl contenders who are still being pressured by the Raiders for the AFC West division and a first-round bye. There are no trap games left. Just keep riding Big Red.

Lions at Giants (-4): Giants hype is going to be off the rails this week after beating Dallas twice. I'll begrudgingly take them to win, but I like the Lions getting four.

Colts at Vikings (-4): I know exactly what the Vikings are. They're great defensively, but a highly flawed team on offense, with terrible offensive tackles, no run game, average skill players, and a quarterback who can't put a team on his back. However, 13 games into this season, I still have no clue what the Colts are. When in doubt, take the home team.

Steelers (-3) at Bengals: "Can we play the Eagles or Browns every week?"

Saints at Cardinals (-2.5): This is a fun matchup that nobody will see because they're both done.

Patri*ts (-3) at Broncos: Deflatey McGee and the gang are 6-0 on the road this season, and lead the NFL in point differential, at +119. Deflatey also likely remembers the beating he took from the Broncos' defense in the playoffs last season, and is eager for some revenge. I'm just thankful I never again have to hear about the Deflatey-Manning rivalry for countless hours whenever these two teams play.

Raiders (-3) at Chargers: I reeeeaaally considered taking the Chargers here, as they are a dangerous divisional opponent that is better than their record would indicate, but ultimately, the Raiders are still fighting for the AFC West crown (along with a first-round bye) while the Chargers are done.

Buccaneers at Cowboys (-7):  This feels like a classic "We know Cowboys fans will bet on whatever the line is" type of spread. Dallas has "only" beaten five opponents by more than seven points this season, and they're facing a Buccaneers team that has won five straight games, including wins over the Chiefs and Seahawks. There's no way this line should be seven points. And you know what? Screw it, I'm taking the Bucs outright.

Panthers at Redskins (-6.5): This is a really tough late-season game for a Redskins team trying to stay in the wildcard race. The Panthers don't strike me as a quitting type of team, and they are far better than their 5-8 record would indicate. I'll pick the Skins to win, but I'll gladly take the Panthers with 6.5 points.