Lane Johnson's suspension ended up being disastrous for Eagles (duh) 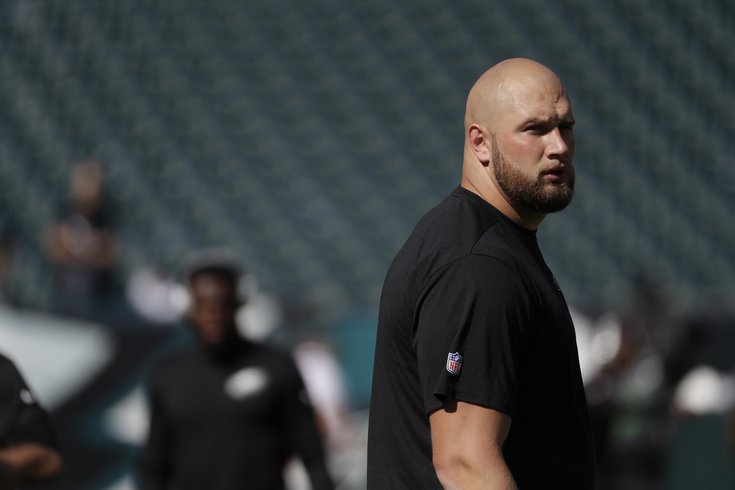 Lane Johnson's suspension was a major blow to the Eagles' offense in 2016.

Heading into their Week 15 game against the Baltimore Ravens, the Philadelphia Eagles might have to play their fifth option at right tackle so far this season. With Lane Johnson suspended for his second offense for violating the NFL's policy on performance enhancing drugs, Halapoulivaati Vaitai hurt, Matt Tobin hurt, and Allen Barbre's status uncertain, that fifth right tackle would be rookie offensive guard/center Isaac Seumalo, according to Doug Pederson.

As a recap, let's take a look back at players the Eagles have used at right tackle so far this season:

Immediately after the Eagles' bad loss to the Cincinnati Bengals, Doug Pederson was asked what the difference was between the 3-0 start to the Eagles' season, and what they have become. The first thing he mentioned was the right tackle position.

“There are probably a lot of factors," he said. "One, you can look at the adversity. We’ve lost our right tackle there, and things started going the other direction (with) some injuries thrown in there. Teams have film on us and film on Carson. They’ve attacked differently. It just all begins to kind of snowball. It gets us obviously in the situation we’re in.”

While some felt that Pederson's answer was a cop out, he wasn't exactly wrong.

Johnson's suspension was felt immediately, as Vaitai was pressed into action as a rookie Week 6 against the Redskins, when he was eaten alive by Washington's pass rush, most notably by Ryan Kerrigan. Vaitai continued to struggle for a few more games, before showing improvement.

Just as Vaitai began feeling more comfortable, he sprained his MCL against the Seahawks, which forced Allen Barbre to move over from his starting LG spot to RT, with Stefen Wisniewski filling in at LG.

The Eagles had to make due with that shuffled line arrangement for a few weeks, before Barbre suffered a hamstring injury against the Redskins, making way for deep reserve Matt Tobin in the second half. As you saw Sunday against the Redskins, Tobin sprained his MCL during the final drive, stayed in the game, and allowed a game-sealing sack to Kerrigan before Carson Wentz even had a chance to blink.

"The biggest glaring thing is that we're on our fifth right tackle," Pederson said on Wednesday. "(When we had) Lane, we weren't going through this. You're asking guys to kind of play out of position. (Barbre) has been a guard, and then Big V, big young rookie player, and gets hurt, and Matt Tobin gets hurt and so now we're on our fifth, but (Johnson) is a veteran player and he is a tackle. We're just looking forward to next week and getting him back."

Johnson is eligible to return from his suspension next Thursday against the Giants, as Pederson noted. Unfortunately, the Birds are already 5,000,000-to-1 shots to make the playoffs, and will probably be mathematically eliminated by the time Johnson ever sees the field again this season.

Should Johnson fail a third test for PEDs, he'll be suspended two years.