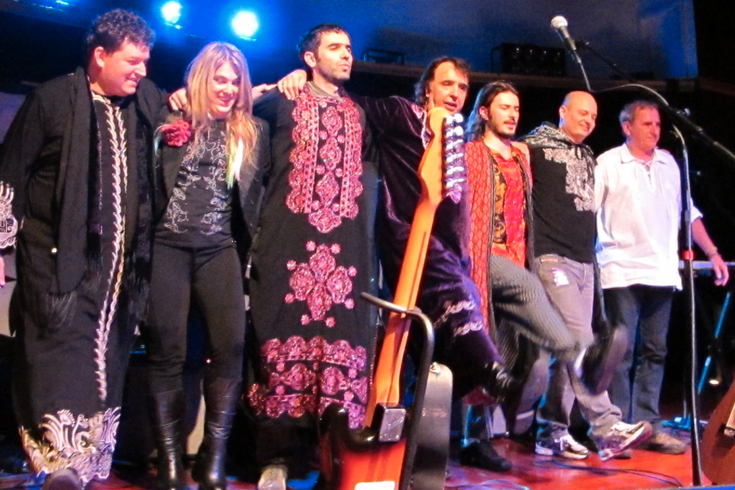 This weekend, Philadelphians can enjoy a rare glimpse of Brazilian psychedelia in the flesh as the 1970s band, Os Mutantes, reunited for the last decade or so, fills up the Trocadero with infectiously weird sounds.

For at least half a decade, Asher Roth has been marching farther and farther away from the frat-rap he slipped into early in his career. After shedding the “I Love College” persona after—well, you know—Roth burrowed into the underground, experimenting with his flows over weirder boom-bap production.

GrandeMarshall, meanwhile, has fast become one of Philly’s most exciting rap ambassadors, aligning with the New York label Fool’s Gold to share his vision of the city. His latest, a short 8-track album called “Risk/Reward,” bundles up a winning collaboration with another Philly upstart in Tunji Ige.

The Austin band Black Joe Lewis & The Honeybears trades in a familiar brand of eclecticism. They play blues and funk with a gritty soulfulness that churns out an energetic brand of roots rock. The group sounds like what you might expect from a movie scene passing by a divey joint in the South, and part of the appeal is that you think you know what to expect. And then they blow you away.

The NYC-cum-Philly group Mannequin Pussy have an aggressively diverse sound. The quartet plays loud and fast but will switch gears unceremoniously for a softer edge. It’s an anxious sound that’s somehow irresistibly fun at the same time. Tomorrow night they’re joined by the precocious West Philly songwriter Abi Reimold and a pair of opening acts, all of whom are joining forces for this show benefiting The Trevor Project, an organization providing outreach and suicide prevention services to LGBTQ youth around the country.

Just over a decade after forming, the Harlem Quartet has never been on steadier ground. Two of the original members departed the group several years back, but not before the classical crew won a Grammy in 2013 for Best Instrumental Composition. After forcefully carving out a diverse space in classical music with their very presence, the Quartet has toured around the world and recorded with many of the greats already.

Vagabon, a budding indie rock protagonist, has a disarming vulnerability. Her songs and playing aren’t polished perfect, but there’s never any doubt that the 20-something-year-old singer Laetita Tamko is sharing her entire self, awkwardness and jarring loneliness included. The Cameroonian New Yorker will release her first full project this Friday, and then scoot down to Philly the next night to celebrate with friends.

It’s not a knock on the Japandroids to point out that their new music sounds like their old music. On last month’s “Near to the Wild Heart of Life,” their third album and first in almost five years, they stuck to their blueprint for good (newly) old-fashioned rock. Fans might not have been surprised at the sound, but it’s what they’ve been clamoring for all along anyways.

For plenty of American listeners, Os Mutantes are the only Brazilian band that matters. The country’s musical legacy runs just as deeply as our own, but only pockets of Brazil’s many genres reached our shores, and chief among them was tropicália. It’s a uniquely Brazilian form of political art rock, and alongside legendary acts like Caetano Veloso and Tom Ze, Os Mutantes helped spearhead the movement in the first place. This weekend, Philadelphians can enjoy a rare glimpse of Brazilian psychedelia in the flesh as the 1970s band, reunited for the last decade or so, fill up the Trocadero with infectiously weird sounds.