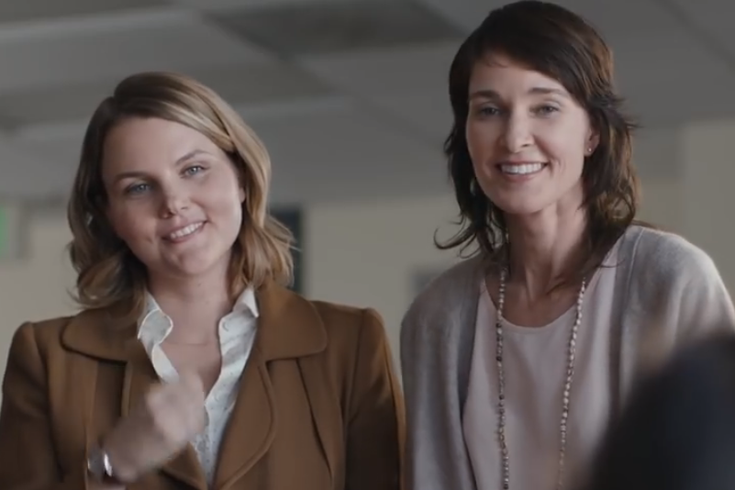 A lesbian couple is featured in a Wells Fargo advertisement.

A recent Wells Fargo commercial that features a lesbian couple meeting their new adopted daughter is receiving religious backlash, but the company has no plans to pull the ad.

The advertisement depicts two women learning sign language while they prepare to adopt a hearing-impaired child. In response, Franklin Graham, son of televangelist Billy Graham, pulled the accounts of the Billy Graham Evangelistic Association from Wells Fargo and urged other Christians to follow his lead.

"Have you ever asked yourself–how can we fight the tide of moral decay that is being crammed down our throats by big business, the media, and the gay & lesbian community?" Franklin Graham wrote on Facebook earlier this month.

"At the Billy Graham Evangelistic Association, we are moving our accounts from Wells Fargo to another bank. This is one way we as Christians can speak out—we have the power of choice. Let’s just stop doing business with those who promote sin and stand against Almighty God’s laws and His standards."

Graham chose BB&T of Winston-Salem, North Carolina, as a replacement but soon learned it too supports diversity among its customers and employees. The bank is a sponsor of the Miami Beach Gay Pride Parade. As a result, Graham is left to continue his search for a bank that is anti-LGBT enough.

"Let’s just stop doing business with those who promote sin and stand against Almighty God’s laws and His standards."

The American Family Association, based in Tupelo, Mississippi, has since followed suit.

“For years, Wells Fargo has supported a lifestyle that is not in line with biblical standards, so now it's time for Christians to pull their business from the bank,” Tim Wildmon, president of the AFA, told the San Francisco Business Times.

“Franklin Graham said it best. Banks should focus on interest rates and charges, rather than moral and social issues. AFA wholeheartedly agrees, and is calling on Christians to stand for God's truth with action."

According to Charismanews.com, a Christian news website,  AFA sent an email alert "to its hundreds of thousands of friends and supporters, urging Christians to close their Wells Fargo accounts, as the financial institution becomes an even more staunch supporter of the LGBT lifestyle."

In its alert, AFA reminded readers that in 2003, AFA warned that Wells Fargo was beginning to show public support for homosexuality—one of the first companies in America to do so. Then in 2005, Dr. James Dobson and Focus on the Family announced it was withdrawing funds from Wells Fargo after the company threw its support behind homosexual activist organizations.

Valerie Miller Williams, a Wells Fargo spokeswoman, told the San Francisco Business Times that the bank is not going to pull the ad.

“Our CEO John Stumpf very frequently will talk about LGBT inclusiveness and, talk about walking the talk, you can often hear him speak to the value that our LGBT team members provide,” Doug Case, senior vice president, small business segment manager and an LGBT executive at Wells Fargo, told the publication.

Wells Fargo has 25 bank and ATM locations in Philadelphia and an equal number in South Jersey.

See the advertisement below.