The fire was first reported before 3 p.m., and parts of the building were reportedly collapsing as fire crews battled the flames 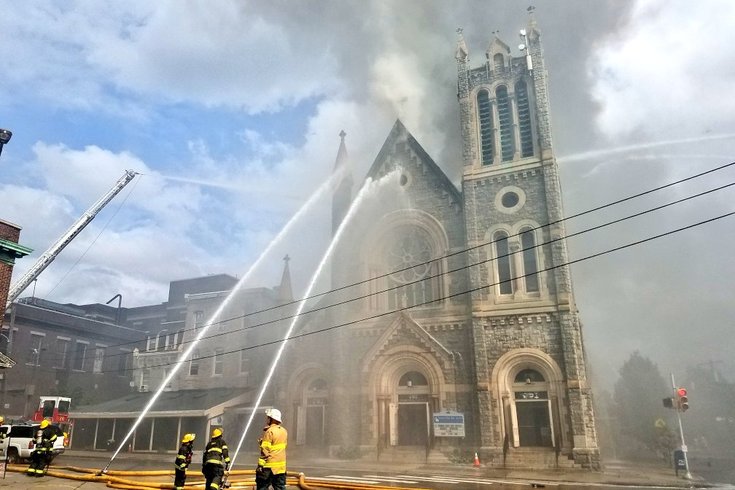 A three-alarm fire broke out at the Greater Bible Way Temple in West Philly on Tuesday, Aug. 27, 2019. The church's roof was severely damaged, and the building was ruled 'imminently dangerous' by L&I

UPDATE, 6:15 p.m.: The fire has officially been placed under control, according to the Philadelphia Fire Department.

ORIGINAL STORY, 3:20 p.m.: A three-alarm fire broke out at the Greater Bible Way Temple in West Philly on Tuesday afternoon. Fire crews from the Philadelphia Fire Department were on the scene as of 3:20 p.m. attempting to control the fire.

The temple sits at the corner of 52nd and Warren streets, less than a block away from the trolley lines on Lancaster Avenue. It's currently unclear how the fire started.

As of 5 p.m., the fire was still burning inside the temple, and the extent of the damage to the building was beginning to come into focus. The Fire Department upgraded the fire to three alarms just before 5 p.m.

The fire is still going inside the church shortly before 5 pm. pic.twitter.com/iIOVpSvbLT

More eyewitnesses near the building on Tuesday captured the scene:

View from the ground of #BreakingNews in West Philly, scene of church on fire @NBCPhiladelphia pic.twitter.com/ZrCDKc4Jfz

West philly church on fire this shit is crazyyyy pic.twitter.com/pe83PJ8zzx

The Fire Department first reported the fire just before 3:00 p.m.:

According to the Fire Department, at least 75 crew members arrived at the scene to fight the fire.

Outstanding work by @PhillyFireDept members & our support partners on this 2-Alarm+ church 🔥🔥 in West Philly this afternoon... #pfdstrongtogether #fireiseveryonesfight pic.twitter.com/mHFNKVPtwG

According to CBS3, one person was transported to a hospital, though the severity of any injuries wasn't immediately clear.

The Greater Bible Way Temple ministry dates back at least 60 years, according to its website. The church's website says it holds ministry night events every Tuesday evening, from 6 p.m. to 7 p.m., and also opens its emergency food cupboard every Tuesday from 4 p.m. to 6 p.m. to those in need.

This is a developing story, and it will be updated as more information becomes available.