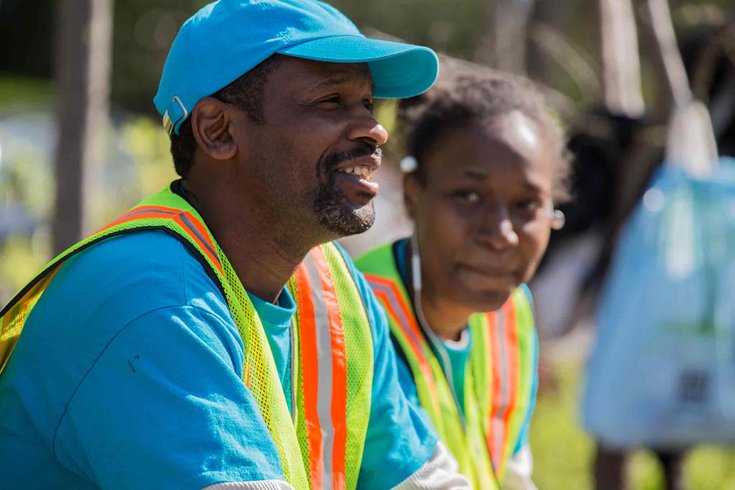 Gaius Shired, 49, left, seen with fellow landscaping trainee Xia Frazier, learned about the program from his probation officer. “Out of 200 people, they picked me, so I feel obligated to give it my all," he says. "It didn’t have to be me.”

Xia Frazier had been out of work for almost a year after getting laid off when she heard that the University City District’s West Philadelphia Skills Initiative was offering training and, hopefully, a job in landscaping.

Her last job had been as a cashier at the Target on City Line Avenue, and the commute could take up to an hour, and this training offered a strong possibility of employment within walking distance.

“I sometimes wouldn’t get off until 1 in the morning, and that was horrible trying to catch a bus then,” she recalls.

Five months later, Frazier, 27, has almost completed her training. She remains enthusiastic about the program.

“[Working in] the hospital was always my dream, but this is really what I want to do with my future now,” she says. “I just love the experience. The best thing is the planting, looking at all that beauty just makes me so proud. Now I go home every day smiling, telling my mom what I did at work.”

To date there have been 251 participants and 184 graduates, with 164 of them placed in jobs with a variety of employers, including Drexel University, AlliedBarton, Children's Hospital of Philadelphia and UCD itself. Applicants to the training program must have a high school degree or GED and live in one of five West Philadelphia ZIP codes.

The program lasts anywhere from four weeks to 26 weeks – for the most intensive, nursing skills training. There are numerous cadres covering a range of professions, with landscaping a relatively new addition. Others include security, food service and a variety of health care jobs. 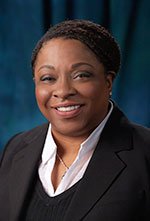 “Businesses and schools are run by middle-class norms, and often, these norms are opaque to people who are living in poverty, so we teach middle-class norms,” says Sheila Ireland, WPSI's director, pictured at left. In addition to learning about the profession in question, participants are taught skills for navigating “middle-class institutions.” Included are sessions with financial planners and seminars on how to access health insurance. Participants are taught how to tailor their resumes and apply for jobs and then are required to actually send out applications to 15 different employers. Hands-on training in the field follows in the remaining weeks.

The program is wildly popular among those who get in, and understandably so. The program succeeds in an exceedingly grim context. Philadelphia is the poorest of America’s big cities, and a significant amount of that suffering can be found in the struggling neighborhoods that surround the affluent bubble of anchor institutions at the heart of University City.

Take ZIP code 19139, running west of 46th Street to the city’s border and from Spruce Street up to Westminster Avenue (the Market-Frankford El runs through the center). The poverty rate is more than 34 percent, and the median household income is $24,627. Of the 18,000 people in the labor force, almost 12 percent are unemployed, 17 percent have less than a high school degree, and 32 percent have graduated high school (or have an equivalent degree).

“I’m impressed that they can have as a qualification that the person be a high school graduate. That says a lot about the need for work among people from these ZIP codes,” says Laura Wolf-Powers, a workforce development expert with the City University of New York who was formerly with the University of Pennsylvania. “[The trainees] are not well suited at this point in their trajectories to get on a career pipeline. Those five weeks of training can convert someone who is unemployed to someone who is employable. Then, even if they lose their [new] job, they can have this on their resume and the skills.”

WPSI reports enormous demand: a total of 120 seats available in the six annual cohorts are contested by 3,500 applicants. But the program is not workforce developer of last resort. The program exists, in part, to provide trained workers to University City employers. So WPSI selects not on the basis of the neediest job-seeker but based on an assessment of who seems most likely to succeed.

“We employ a multiple hurdle process,” Ireland says. To begin with, she reports, of every 100 applications, as many as 60 are filled out incorrectly. An additional 30 applicants may not have the appropriate background. The program doesn’t require, say, working guard experience to get into the security cohort, but it does require some kind of customer service experience. Then the interviews begin.

“Our interviews are based on motivation: What is it you want to do, and what are you doing to work toward that?” Ireland says. “Whatever the employers' requirements are, those are also the requirements to get into our program, mainly because I don’t believe in disappointing people. You aren’t going to get a job with AlliedBarton without passing a drug test, so you might as well get that out of the way.”

But the entrance requirements also vary. Security jobs with AlliedBarton require a criminal background check, and so do positions with Children’s Hospital. The landscaping and food service programs do not. Drug testing is required for all of the programs.

Gaius Shired, 49, learned about the program from his probation officer.

“Back before I was arrested, I would go to people’s houses, me and a couple of other guys, and we would go do yard work, painting, cleaning out people’s basements, but the landscaping was always my favorite part,” he says, adding that the program has already taught him valuable skills, including computer training. “Out of 200 people, they picked me, so I feel obligated to give it my all. It didn’t have to be me.”

Of the current landscaping cohort, six people have either flunked out of the course or found work through the job application assignments. Nine remain. That retention rate is better than the last landscaping cohort, where only six trainees graduated. There is no guarantee of a job, but 89 percent of graduates are connected with work. The retention rate in these new positions is 82 percent after three months on the job, then 80 percent after six months.

“Wages run from $9.50 at AlliedBarton, to $14 at Drexel to $20.41 at CHOP,” Ireland says in an email. “All of the jobs pay benefits for full-time permanent positions.” (During the program, the weekly stipend ranges from $150 to $325, going up every week.) She notes that AlliedBarton is known for providing opportunities for growth within the company (all of the current executive board members used to walk a guard beat, with the exception of the human resources director). She notes that 40 percent of the previous security cohort went on to supervisory positions.

The other advantage offered by WPSI is location: All of the jobs are based in University City. The Philadelphia metropolitan area has long been notorious for job sprawl. A recent Brookings study found that 64 percent of regional jobs are 10 to 35 miles outside the center of the city. The lengthy commutes necessitated by this fact are especially hard on lower-income workers, who might not have cars. (Almost 19 percent of working Philadelphians don’t have access to a car, a percentage outstripped only by New York, Boston and Washington, D.C.).

“It’s been really hard to find anything in my area, because most of the jobs are way out in Jersey or Pottstown (in western Montgomery County) — areas I can’t get to,” Frazier says.

“The hours were tough," she says of her Target job. "This is easy: I just walk every day.

"Now I love getting up in the morning. I’ve been telling everyone about it. I've handed about 15 applications out in my neighborhood.”