By Brian Hickey
PhillyVoice Staff
Television On The Set 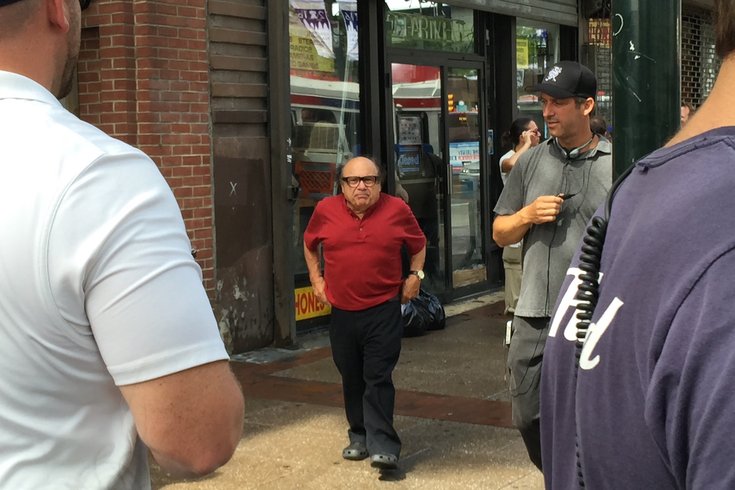 They lined the other side of the street and leaned out of car windows yelling for Danny, Charlie, Dee, Mac and Dennis, taking photos and waving at people they’d only seen on television before. And they were heard.

On Friday, the cast and crew of “It’s Always Sunny In Philadelphia” shot exterior scenes for its upcoming 12th season of pushing the limits of comedy on FXX Network. Well, they shot scenes near 10th and Market Streets when they weren’t waving back or posing for selfies with fans who turned the block into an interactive Hollywood experience.

And to hear them tell it, they had a blast while doing so.

“It’s great to be back,” said Charlie Day, who portrays “wild-card” character Charlie Kelly on the show, which started in the mind of his co-star Rob McElhenney, a Philadelphia native and St. Joseph’s Prep grad. “We’ve missed it because we weren’t here the past two years.

“It’s crazy to film on the streets and having so many people stopping to take pictures. It’s really fun to connect with the fans in that way because we really don’t get that direct experience, especially with the Philadelphia fans, in Los Angeles.”

While Day said he and his family — namely co-star Mary Elizabeth Ellis (who portrays his character’s stalked-interest “The Waitress”) and their four-year-old son Russell — used their downtime during the week-long shoot to check out The Franklin Institute, co-star Danny DeVito said he doesn’t get much of a chance to get around the city while they’re here. 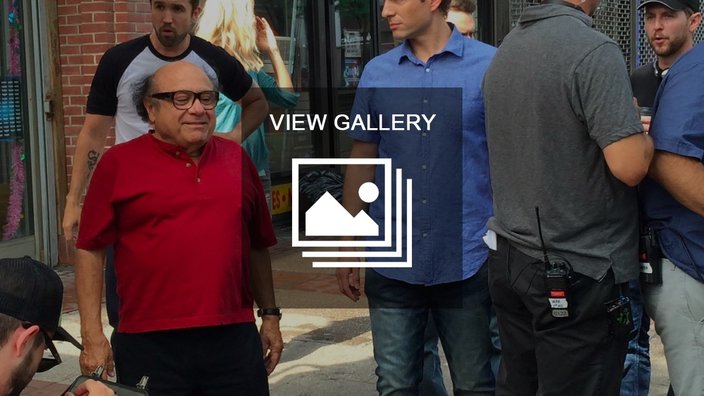 DeVito arrived by car Thursday night and saw the skyline he digs, and felt the energy that endears Philadelphia to him. He admitted these types of shoots are challenging, though, with so many moving parts that don’t present themselves when working in the studio.

“It’s hard on the camera people because the background has to be clear, but if you’re going into a city to shoot, you gotta be ready for the people,” he said. “We do it for us, and we also do it for the fans. I wish we did it more. I love coming back here to shoot. They’re very nice fans.”

For McElhenney, these sorts of shoots represent a genuine homecoming. Having grown up here, most of his extended family remains local.

In fact, he and his family – wife Kaitlin Olson (who portrays Sweet Dee on the show) and sons Axel and Leo planned to head down the Jersey Shore this weekend. (Their shore towns of preference will be reflected in PhillyVoice’s Definitive Rankings on Monday.)

He spoke Friday between filming a scene along Market Street — sorry, the plotline is embargoed until the season gets underway, date to be determined — he discussed what he misses most about Philadelphia.

“The weather. It’s just very consistently dry and warm in Los Angeles, and I just miss the seasons,” he said. “So, to come back here and see it so green, even the humidity doesn’t bother me. I kinda love it.”

During the show’s time here, McElhenney had a chance to welcome Aniya Wolf to the set. Wolf, as you may remember, was kicked out of her prom in Harrisburg for wearing a suit. After the story went viral, McElhenney learned about it via Mayor Jim Kenney’s Twitter account.

So, he invited Wolf, and Wolf had her supporting-star turn on Thursday.

A day later, Kenney chalked McElhenney’s graciousness up to their shared Jesuit education at St. Joe’s Prep that instills an understanding of “fairness, equality and acceptance,” before posing with the cast in a photo.

McElhenney, who said he is seeking a Jesuit education for his sons in Los Angeles, concurred. (Side note: his two sons totally dug hearing their mother's voice as one of the character's in "Finding Dory," but he said they seem to ascribe misplaced normalcy to their mother and Uncle Danny voicing Pixar characters.)

“When I saw the picture, I thought it was just a great suit. I don’t know why anybody would not want to see somebody in that suit,” he told PhillyVoice. “She came by yesterday and donned it in one of the scenes. I thought she looked sharp. She got a lot of compliments. So now, instead of 100 people seeing it at the prom, she’ll have about 5 million people seeing it.”

Though the embargo means the details of the scene being filmed on Friday can’t be shared — suffice it to say, it’s hilariously true to the show’s penchant for giving a unique twist on hot-button issues of the day — McElhenney said seasons 12, 13 and 14 will be true their mission. (And by then, they will have created the longest-running sitcom in TV history.)

“We’ll keep doing it if people keep watching it. One of the things we try to do is continually surprise the audience, which is a challenge in season 12. And in 13 and 14, it will be,” he said. “But, we’ll also continue to give them what they have grown to love. That’s a challenge we accept and when we jump into the writer’s room every year, we try to achieve that with every episode.”

As for Day, he shared a message for the It’s Always Sunny fans who didn’t catch them out and about during the past week. After all, it was their first time back after a two-year hiatus.

“Sorry we missed ya,” he said. “I hope you check out the show, and we’ll see you next year.”