What they're saying about Sixers: Three's a crowd, PG problems and how new CBA will help 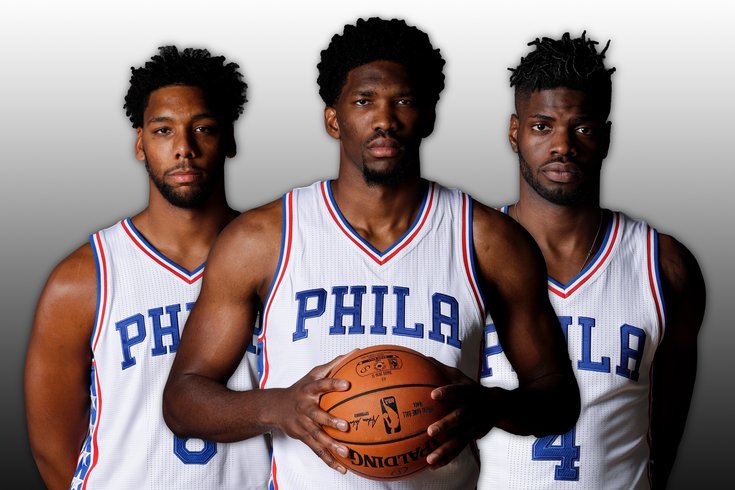 Jahlil Okafor, Joel Embiid and Nerlens Noel. Three men enter, on two survive -- and Embiid already has one of those spots.

On Monday night, the Philadelphia 76ers (7-22) visit the Sacramento Kings, who are looking for their fourth straight win, in what was supposed to be the teams' second meeting of the season.

I say "supposed to" because late last month their game at the Wells Fargo Center was postponed due to unsafe court conditions. Basically, someone forgot to adjust the temperature in the building following the previous night's Flyers game.

It was a glorious mess -- the players, the coaches, the fans, and the media just sat there for an hour-plus waiting to see if the NBA would postpone the game -- and even DeMarcus Cousins got in on the action, grabbing a mop and attempting to try to dry the court himself in order to get the game played.

Ultimately, it was postponed, sending disappointed fans home without their first look at Joel Embiid vs. Cousins. Assuming nothing crazy happens between now and tip, fans should finally get a chance to see the two gifted bigs battled down low -- and on the perimeter.

Here's a look at what they're saying about the Sixers, starting with a preview of that matchup...

DeMarcus Cousins, for all the substantial off-court baggage he carries, has career-highs in a bevy of meaningful offensive categories. His points (29.1 PPG), true shooting percentage (55.9 percent) and offensive rating (109.0) all have illustrated Boogie’s spike in production and efficiency at 26 years old.

Additionally, Joerger has asked Cousins to stretch the floor in the 2016-17 season and Boogie’s obliged. Firing a team-high 4.7 threes per game, Cousins has added another wrinkle in his already dynamic offensive approach. The ability to bring a big to the perimeter and away from the rim is paramount in the modern NBA.

That’s what might transpire tonight with the Sixers’ frontcourt defenders. Blessed with a center who can contain around the perimeter, head coach Brett Brown could assign Joel Embiid (18.4 PPG, 7.4 RPG, 46.8 FG%) to handle Cousins when Jahlil Okafor (11.1 PPG, 5.0 RPG, 52.0 FG%) also is sharing the floor. Embiid enters the contest with a 102.0 DRtg, leading the team among players who have played five or more games. [libertyballers.com]

And that brings us to...

The BIG question: Okafor or Noel?

... which of the young Sixers' young bigs not named Joel Embiid should be traded?

As Keith Pompey of the The Philadelphia Inquirer points out in his story, the offensively-minded Okafor is "a little more attractive than Noel because he's in the second season of a four-year rookie deal." That gives potential trade partners more time -- two years to be exact -- to decide whether or not they want to lock him up longterm or let him test free agency, although the new CBA may help with that (more on that later).

Both players are young and talented, even if their games are polar opposites in terms of style -- and they've both had off-court issues. But if one has to go, what should be considered a fair return from a Sixers perspective?

Keith gets much more in depth, breaking it down by each player, but I actually want you to go click on his story -- and all these stories -- so here's just part of the intro:

We all know that Sixers would have been better off cutting their losses by trading one of the two around the NBA draft and the three months that followed. At least they wouldn't have all the distractions that came after Noel voiced his displeasure in the Sixers' having three starting-caliber centers in the 6-foot-11, 232-pounder, Okafor, and Joel Embiid.

They wouldn't be forced to slide power forward Dario Saric to small forward, where he's struggling just to get him some quality minutes in games. The Sixers wouldn't have to force-feed a Twin Towers starting lineup when they know they're more effective without it.

Funny you should ask, Keith...

... because one of your paper's former writers, David Aldridge, now an NBA analyst on TNT, offered up a few potential options for the Sixers, but only in regards to trading Nerlens Noel.

Personally, I don't think the Sixers are going to trade Nerlens; I think it's going to be Okafor. And, yes, that's despite Bryan Colangelo saying that Noel's recent negative comments regarding playing time were "ill-advised not only for his own value but probably for our ability to have him involved in a deal."

That's got to be a bluff, right? To make other GMs think the Sixers are placing a higher value on Okafor and potentially bait them in to dealing for him instead? Because there's no other possible explanation for not having the former lottery pick in your rotation.

And regardless of what you think of the him, Colangelo isn't that stupid. If someone can explain how sitting Noel increases his trade value, I'm all ears. That being said, Aldridge outlined four potential deals centered around Noel, the first of which includes a familiar name:

Reverse the Hinkie and bring Holiday back.

It's an uneven trade money-wise (Noel makes $4.3 million; Holiday makes $11.2 million), but the Sixers are so far under the cap they can easily take on the extra salary. Philly is in desperate need of a lead point guard; Sergio Rodriguez is shooting 39.5 percent from the floor and Jerryd Bayless is out for the year. Holiday is a reasonable four-month rental by the Sixers to see if he can stay healthy and get back near his All-Star form while Ben Simmons learns the ropes of playing PG in the pros. (The only issue is that Holiday’s wife, Lauren, the U.S. women’s soccer team star, is recovering from brain surgery after giving birth to the couple’s first child.)

The Pels have Tyreke Evans back from injury to finish the season at the point, and Noel is well worth Nawlins looking for the next year-plus. He displayed at least some acumen away from the basket last season. But his greatest potential for the Pels would obviously be at the defensive end, as a big who could take some of the burden guarding opposing centers off of Anthony Davis. [NBA.com]

That would be ... something.

The Sixers overcrowded frontcourt has resulted in a backcourt that's void of any players you really feel confident will be part of the team's long-term future. Sure, Ben Simmons should be rejoining them sometime next month and is expected to do the bulk of the ball handling, but the team could still use a more traditional point guard as Bob Cooney points out:

A problem just as debilitating to the organization and problematic for the coach is the point guard situation.

Remember a few months ago when the topic surrounding that position was how much Ben Simmons would control the ball and how Jerryd Bayless, a proven, veteran combo guard, could benefit from playing with and help improve Simmons' game? Then came Simmons' fractured foot at the end of training camp and the torn ligaments in Bayless' wrist that recently required surgery and ended his season after just 71 minutes over three games.

So Sergio Rodriguez, signed in the offseason to a one-year deal as a security blanket for the position, and T.J. McConnell, a player who may never shed the "just happy to be in the league" label, were forced to be the head of the snake for a team that was hoping this would be a season in which wins came almost as regularly as losses. [philly.com]

Maybe Aldridge was on to something with that Holiday deal...

The last time the NBA Players Association and league’s 30 owners had to find common ground on something, it resulted in a lockout and an ensuing 48-game season. This time around, however, the two sides were able to ratify a new Collective Bargaining Agreement in what seemed like no time at all. And that’s not the only good news for Sixers fans.

It seems as though this CBA will actually benefit the Sixers, something that must have infuriated several owners once they realized they were essentially validating Sam Hinkie’s Process(TM). The biggest reason for this change was Kevin Durant’s decision to leave Oklahoma City — not because him joining Steph Curry and the Warriors was unfair, but because the way in which the Thunder were more or less stripped of their biggest bargaining chip.

Typically, teams like the Thunder would be able to offer more money in order to keep one of their own players, but because a much larger salary cap is expected once the NBA signs its new TV deal, it actually made more financial sense for Durant to sign a short-term deal that will last him until that happens. Now, however, teams will be able to offer even more in order to keep their star players from leaving. And considering the Sixers are a young team with potential superstars in Embiid and Simmons, Colangelo and Co. must be thrilled by this provision in the new CBA.

Here’s more on how the “Designated Player” exemption will work, via Matt Carey of Liberty Ballers:

To prevent such a situation again, the NBA has essentially created a system where if a star wants to leave his current team, he can, but it’s going to be a financially questionable decision at the level of “should I invest my life savings in a responsible 401K or a collection of Furbies?”

The new CBA created a new “Designated Player” exemption, which is pretty much a souped-up max contract extension almost specifically for homegrown players.

(Credit to Eric Pincus at Basketball Insiders, who obtained a copy of the term sheet for the new CBA and spelled out a lot of the new details of the deal.)

The exemption applies to players entering their eighth or ninth season, or what’s essentially their third NBA contract. Let’s use Joel Embiid as an example. Embiid is currently on the third year of his four-year rookie deal. The next contract he signs will likely be for four or five years (more on that momentarily). The “designated player” extension would not apply to that contract, but rather the next contract he signs. …

A player who qualifies for that five-year extension can receive a first-year salary of 35% of the cap, which normally requires ten years of service, with 8% annual raises. Alternatively, signing a free agent contract with a new team would only leave that player eligible for a four-year deal with 30% of the cap in his first year salary with 5% annual raises. [libertyballers.com]

Basically, this means that if either Embiid or Simmons were to be offered this exemption and not take it, it would cost him tens of millions of dollars (depending on where the salary cap is by that point.

And that might not even be the best part.

Teams will have two of these Designated Player exemptions to use, meaning the Sixers can theoretically keep both Embiid and Simmons. In the short term, the new CBA also now allows for two five-year rookie-scale extensions, compared to one under the previous deal, which will also benefit the rebuilding 76ers.

You should definitely check out the entire story, which is very informative and also goes into specifics about how this new exemption works, using Embiid as an example.