What they're saying: Are Eagles still a Super Bowl contender without Wentz?

On Monday, a day after the Eagles clinched the NFC East title with a 43-35 win over the Los Angeles Rams, Doug Pederson confirmed the worst fear of all Philly fans: QB Carson Wentz is done for the season after suffering a torn ACL late in the third quarter.

As difficult as that was for you to read, it was equally difficult to write.

What Wentz has done in his first two seasons (and especially in 2017) has not only been historic, but it's been a hell of a lot of fun to watch. The Eagles were favorites to make the Super Bowl. The city was buzzing. And, in what feels like the blink of an eye, that's all suddenly been flipped on its head. What's normally a jubilant city the day following an Eagles win, especially a big win like the one over the Rams, instead felt more like a wake as fans grappled with the reality that their MVP-candidate quarterback won't be taking the field again this season.

And it hasn't been going well.

While most of Philly has been in mourning, not everyone is giving up hope. And that includes Pederson.

The Eagles will turn the offense over to backup Nick Foles, who led the Eagles on a fourth-quarter comeback drive on Sunday, and Pederson believes the loss of Wentz, while different from the other injuries the team has already overcome, is just the latest obstacle the Birds have been asked to overcome.

I asked Doug Pederson if the #Eagles can overcome this. Here's what he said: pic.twitter.com/PyfD9qwX17

Just as importantly, Pederson doesn't want Eagles fans (or his players) to give up hope just yet.

Doug Pederson offered an impassioned monologue about his message to fans worried the Super Bowl hopes vanished. He might have also been speaking to his players, too: pic.twitter.com/ZkSr9cL3bW

That's easier said than done, not because Foles can't win games in the NFL, but because Wentz had been far and away the team's most valuable player and has done things this season that Foles couldn't even dream of. But Eagles fans don't have to look too far into the past to find an example of a backup quarterback leading their team into the postseason, so maybe all hope isn't lost. 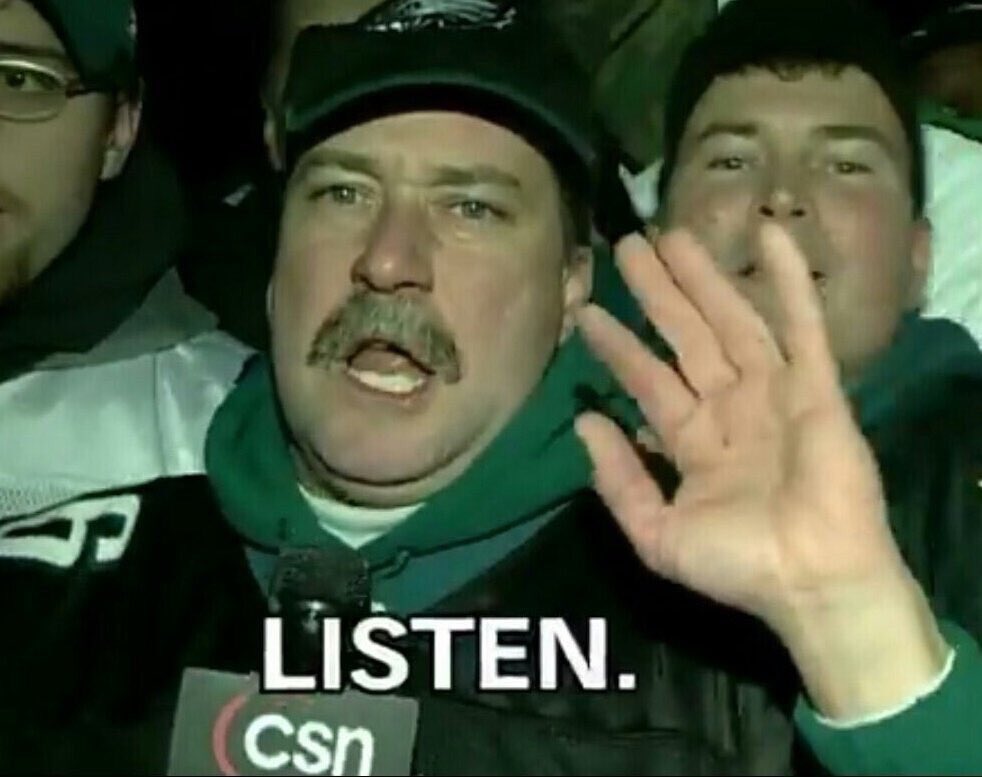 In 2002, Koy Detmer took over for Donovan McNabb after he broke his leg (but finished the game) against the Cardinals. In the next game, a Monday night matchup with the 49ers, Detmer suffered a gruesome elbow injury and was replaced by A.J. Feeley, who went 4-1 that season and helped keep things on track until McNabb returned in the playoffs. A few years later in 2006, McNabb again went down and this time was replaced by Jeff Garcia, who led the then 5-5 Birds to a 10-6 record, an NFC East title and a first-round playoff win.

Neither comparison, however, is apples-to-apples. In the first example, McNabb returned for the playoffs. In the second, Garcia inherited a floundering team and had little pressure on him to succeed (which he did).

They also both ended with the Eagles coming up short of a Super Bowl appearance. So is now the time for Philly fans to begin tempering expectations? Or are they right to act like the sky is falling? Here's a look at what they're saying about the Eagles Super Bowl aspirations and the overall impact of Wentz's injury on the future of this team.

Since it's already been a long day for Eagles fans, we'll start with the good news first.

“Should the fans lower their expectations? Absolutely not. Because the team isn’t.” - Ray Didinger #FlyEaglesFly

This isn’t quite losing Randall Cunningham in Game One of the 1991 season. Wentz is a big part of what the Eagles try to do, but he isn’t anyone’s Ultimate Weapon. Not yet.

Only two teams in the NFL cannot survive without their quarterback: New England and Green Bay. That’s it. Neither team is as complete as the Eagles, and Wentz isn’t as good as Tom Brady or Aaron Rodgers.  [philly.com]

Foles isn’t Wentz, but he may not have to be to keep the Eagles rolling. The team is No. 3 in total defense and No. 2 in rushing yards. As long as he can do enough to keep teams honest and not entirely focused on stopping LeGarrette Blount and Jay Ajayi, there’s no reason why Philadelphia shouldn’t be able to hold on to one of those top seeds in the NFC.

It’s a tough day in Philadelphia now that Wentz is done for the year, but it doesn’t mean the Eagles are toast, too.  [sbnation.com]

At his best, Foles is a pocket passer with reasonable arm strength who is capable of throwing open receivers while in rhythm. His footwork can get inconsistent, which is in part why his numbers fell off a cliff after going from the coaching cocoons of Kelly, Doug Pederson and Andy Reid to Fisher and St. Louis. Foles is tough almost to a fault, staying in the pocket to take hits that end up costing him playing time. He suffered an injury that cost him playing time in each of his three previous seasons with the Eagles...

As much as it hurts to go from one of the league's five best quarterbacks to its 35th-best passer, it might be even worse to go from the 35th-best passer to the league's 90th-best guy. The Eagles would be in danger of doing that if Foles went down with an injury, as third-stringer Nate Sudfeld has never thrown an NFL pass.  [ESPN.com]

According to @SportsLine, Carson Wentz's injury only drops the Eagles' chances of winning the NFC from 37.4% to 34.4%

But make no mistake: Without Wentz, it is asking too much to take them as a serious Super Bowl contender now. They were that, without question, with him. He was brilliant again Sunday — 23 completion in 41 pass attempts, 291 yards, four touchdowns — and all of it vanished like a wisp of smoke once he took those hits on that play that didn’t count but meant everything, once he started that long walk to the locker room, a walk from which he didn’t return. All of it vanished, the hope for the sport’s greatest glory most of all.  [philly.com]

...late in the third quarter Sunday, Wentz absorbed hits from both sides as he dived headfirst toward the end zone, and the collisions contorted his left knee in an odd way, and even though he stayed in four more plays to guide Philadelphia to a touchdown, he hobbled toward the tunnel with a towel over his head — a sight about as soothing as Ronde Barber’s closing down the old Veterans Stadium with an interception for Tampa Bay in the 2002 N.F.C. Championship Game.

That Eagles team was supposed to reach the Super Bowl, and maybe, just maybe, this one was, too. The Eagles have balance and depth and resilience and swagger. They had Wentz, and now they will not.

Dan Marino won MVP in his second year & Miami lost in the Super Bowl. They probably thought that they'd be back every year for a decade. They never got back. That's what terrifies me with Wentz. They had it now.