What they're saying: Jalen Hurts is the guy, a rookie QB is not; the most improved Eagle and more 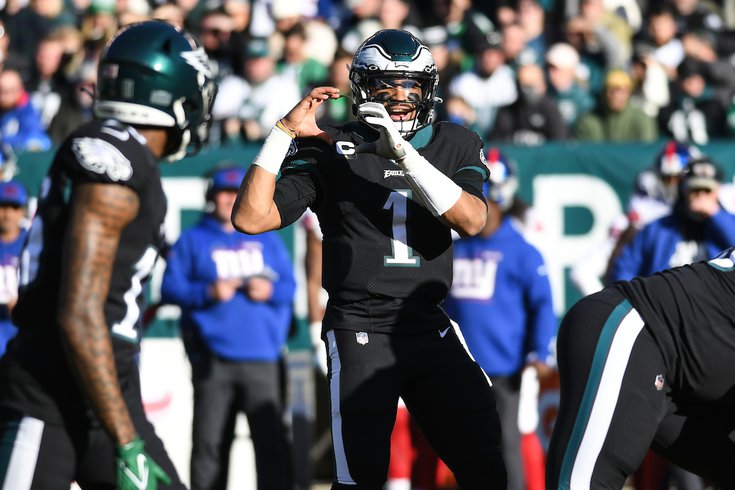 Unless you count the soon to launch USFL, the football blackout period has begun as players recharge for 2022 and front offices start to formulate a plan of action ahead of the new league year (which starts with "legal tampering" in mid March).

But the NFL is a year-round league and there is never a shortage of ink spilled by journalists writing about it. The Eagles enter this offseason amid optimism but also uncertainty. There seem to be more questions about what's next for this team the more you pull back the curtain and look at what's inside.

That feels to be the right place to launch our latest "what they're saying about the Eagles," as we highlight some of the best takes and stories about the Birds from across the internet.

The top storyline this offseason, like it seems to be every season in this city, is at quarterback. Should Jalen Hurts, fresh off an impressive but less than spectacular sophomore NFL season, be the franchise QB going forward? Hurts showed flashes of greatness as well as mediocrity, but did what it took to lead the Eagles to the best rushing offense in the NFL and a playoff berth in 2021. With every option seemingly on the table — from trading for Russell Wilson to drafting a QB in the first round — the debates will likely continue until training camp and beyond.

Over at WIP Giglio wants to get it on the record that Hurts should be the man, and he outlines seven convincing reasons why. Here's one of them:

Hurts’ upside is higher and more real than many are willing to admit or acknowledge: Hurts just had a solid first year as a starter. He accounted for 26 touchdowns, threw only nine interceptions, led his team to a winning record and playoff berth, ranked in the top half of the NFL in yards per attempt, and yards per completion. Pro Football Focus ranked Hurts as the 11th best quarterback in the sport in 2021, a year after ranking him 40 out of 42 quarterbacks. If you didn’t see the significant leap in performance from his rookie year to 2021, you weren’t paying attention.

We’re talking about a 23-year-old quarterback who jumped nearly 10 completion percentage points in his first full year at the position, improved as the year went on in a new offense and comfortably sat among the top-20 players at the position based on almost any logical criteria that combined his passing and rushing ability. To just assume he’s done growing and can’t get better is silly. The chance for Hurts’ upside to lead to a top-10 player at the position exists. [Audacity.com]

PhillyVoice alum Adam Hermann has heard the same strange chatter as many of you — that Jimmy Garoppolo is an Eagles trade target. It seems to make very little sense, and the mention of it at the bottom of an Albert Breer mailbag was quite confusing for most Eagles fans. However, what logically makes sense — Garoppolo is not someone the Eagles are looking to trade for — became clear in the wake of the weird rumors. Here's more:

And then on Friday morning, an unverified Twitter account called NFL Rumors tweeted "The Philadelphia have had rumored interest in Seahawks Russell Wilson and now we are hearing 49ers Jimmy Garoppolo as well", without any citation or explanation. The tweet generated some moderate traction.

That's a whole lot of trade chatter... that came from nowhere.

Now, for a view from someone who would know, ESPN insider Adam Schefter talked Wednesday about the Garoppolo-to-the-Eagles buzz:

But for now? There's nothing to this rumor. It's smoke with no fire. [NBCSP]

Mailbags are everywhere during the offseason. Heck, our own Jimmy Kempski wrote one yesterday. Over at the Philadelphia Inquirer, Eagles beat writer EJ Smith took questions from fans and was asked if he thought the Birds were likely to target one of the first round quarterbacks with one of their three first round picks. Here's how he answered:

I have not. Roseman and Eagles coach Nick Sirianni spent some time watching Kenny Pickett, Sam Howell, and Carson Strong throw on the first day of Senior Bowl practices but that seemed to be the extent of their due diligence during practice. Off the field, I didn’t get the impression that the Eagles spent significant time interviewing quarterbacks while in Mobile, but you never know with the QB Factory. [Inquirer.com]

Okay, enough on quarterbacks. Let's move onto an interesting tidbit Kaye picked up off of Pro Football Focus, which ranks NFL players throughout the season. According to the site, it was slot cornerback Avonte Maddox who had the biggest single-season leap in performance of any Philadelphia player. In fact, he ranked as a top five nickel cornerback in 2021:

Maddox has solidified the nickel spot with Darius Slay manning the top outside corner position. Fellow starting cornerback Steven Nelson will become a free agent in March, as will both starting safeties, Anthony Harris and Rodney McLeod. Realistically, Slay and Maddox could be the only holdovers in the starting secondary next season, as the Eagles could let Nelson, Harris and McLeod walk in favor of youthful upgrades.

Maddox’s turnaround is proof that sometimes players are just fit for one position. While the Eagles had faith that he could perform outside at just 5-foot-9 and 183 pounds, his 2020 season showed that he is better off facing slot receivers and tight ends.

With Slay holding down the top outside cornerback spot, look for the Eagles to add a young prospect to tag-team with him on the boundary. [NJ.com]

Interestingly, defensive back — a position which sports a host of talented veterans for the Eagles right now — could be the position that the Birds focus on the most this offseason. At least that's if you believe The Athletic's Berman, who says DB is their biggest area of need this season in a piece highlighting one for all 32 teams. The Eagles will indeed need to decide if they want to get younger or run the position back for 2022. With three first round picks this April, you can bet one of them being a safety or corner:

Based on the team’s priorities, defensive end will be No. 1 on this list. But if one’s judging needs by trying to fill spots on the depth, the Eagles have voids in the secondary considering starting safeties Rodney McLeod and Anthony Harris and cornerback Steve Nelson are all free agents. The Eagles have internal options for those spots, but it’s more likely they’ll add reinforcements in free agency and the draft.

Sheil Kapadia’s list of the top 75 free agents includes eight safeties, and the Eagles could be active for second-tier options such as Justin Reid or Jordan Whitehead if they’re priced out of the top safeties. They’re more likely to address cornerback in the draft, where Cincinnati’s Ahmad “Sauce” Gardner and Clemson’s Andrew Booth Jr. are potential options with one of the Eagles’ three picks in the teens. Five quarterbacks had completion percentages of at least 80% against the Eagles last season, and an improved secondary will help their pass defense. But an improved pass rush will be even important, so look for the Eagles to prioritize edge rusher with one of their first-round picks. [The Athletic]